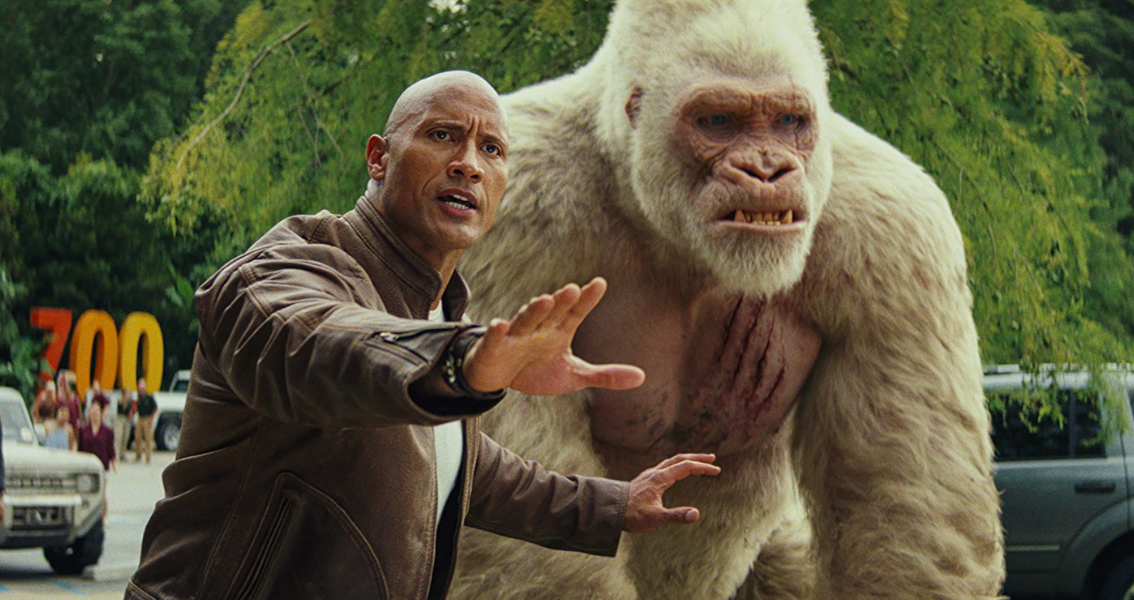 Shockingly, Dwayne ‘The Rock’ Johnson plays an strapping, resourceful good guy in Rampage. This time, though, he’s a bit under the height requirement. In this unlikely, formulaic tale, three genetically-modified animals grow 10 times their normal sizes and begin destroying everything in their wake. Fresh off of Jumanji: Welcome to the Jungle, which is now the highest-grossing film in Sony history, Johnson is already in another video game-turned-movie film as Davis Okoye, a primatologist at a Wildlife Sanctuary. At the sanctuary, an albino gorilla named George, who can speak sign language with the fluency of a human and has the sense of humor of a 12 year-old boy, is Okoye’s best friend. The pair enjoy a touchingly close relationship, which saves the film from being entirely one-dimensional. The relationship adds a new perspective to the video game based film, in which has the players are the animals and win by destroying cities. Rampage is quick to pinpoint the defect that caused George’s transformation into an aggressive, monster-sized killing machine: humans.

Rampage begins in space, where a science experiment goes wrong. A scientist on board a trashed ship is on a frantic call to the earth base, explaining that the test subject is loose, her crew is dead, and she is preparing to abandon ship. A rat the size of a horse floats through the spaceship as the scientist frantically collects samples crucial to further research. Once launched, her escape pod burns up, ending her life and shooting the flaming metal canisters hurtling towards earth.

Meanwhile, Okoye takes a new crew of primatologists through the sanctuary. During the tour, he shows off his ability to remain calm around the animals, and in turn, to keep them tame. An embarrassing moment for the new guy, Conner (Jack Quaid), turns into a defining moment for both Okoye and George, who poke fun at his unjustified overconfidence. George and Okoye have a close, teasing relationship, and Okoye later explains that he’s better with animals than with humans. That same day, three of the canisters from space crash land on to earth. One lands in the gorilla enclosure, and when George goes to investigate, it releases a menacing, green gas. The audience knows it’s on.

Over the next day, George grows so massive and aggressive that he’s uncontainable. Okoye tries to save his friend, teaming up with Dr. Kate Caldwell (Naomie Harris,) a scientist formerly employed by the company responsible for the gene-altering samples, and Harvey Russell (Jeffrey Dean Morgan,) a southern, swaggering government agent with a soft spot.

Rampage sprung for known actors, but the script lets them both down. Caldwell is an underused and underdeveloped stock character, and Russell cannot be taken seriously between cheesy lines like “my grandpappy always said…” and a wannabe cowboy persona that is confused with his identity as a government agent. Okoye, on the other hand, is a compelling figure with a mysterious military background. He has a history of fighting poachers internationally and has outstanding capabilities including handling weapons, helicopters, and dangerous situations. One such scene takes place inside a falling plane engulfed in flames. Okoye saves his counterparts with an impressive combination of swinging, dangling, and jumping maneuvers. It is safe to say that Rampage’s action scenes don’t lack creativity.

For its weak script, confused characters, and borderline unrealistically capable leading man, Rampage still has a message to convey. Though it’s the animals destroying the city, the humans are really to blame. The animals are more developed than the human supporting characters. For instance, George is more of a second lead to Okoye than the King Kong-esk threat he turns into. Rampage makes the viewer sympathize with George and shines a spotlight on the mean-spirited reason for his struggle. The heads of the corporation responsible for the gene-mutating serum are cutthroat businesswoman Claire Wyden (Malin Åkerman) and her dim-witted brother Brett (Jake Lacy). They’re neither forgivable nor thoughtful, and though one-dimensional by the nature of the script, audiences will still enjoy witnessing their downfall, since it means a bit of justice for George. The message is clear. Humans: bad. Animals: good. It’s simplistic, and the script around it is painfully cliche at times, but at least it’s a throughline that carries the film through it’s runtime.

Rampage is a fun watch that’s not meant to be taken too seriously. Sometimes the script gets so aggressively stock, and the one-liners miss the mark so entirely, that even the epic fight scenes between giant mutant animals do not save it from itself. Nevertheless, it is a new perspective on an old game that manages to put a message into a sweet relationship between man and gorilla. Johnson’s macho-man persona is never overwhelmingly annoying, and it’s fun to watch him take on endless physical challenges, knowing every time that he’ll emerge victorious. When it comes down to it, there’s a massive gorilla, crocodile, and wolf with The Rock running around and between their claws and teeth. What else could you want in an action movie?