The Georgetown women’s volleyball team will begin this year in a similar fashion to recent seasons.

They are talented: senior middle blocker and preseason all-Big East selection Symone Speech is back, along with senior libero Kenzie Higareda and senior outside hitter Alyssa Sinnette to round out a trio of decorated upperclassmen.

They are also, paradoxically, inexperienced as a full unit once again. Despite returning 13 letterwinners, the Hoyas will also feature seven newcomers, including five incoming freshmen and a pair of junior transfers, all of whom will be expected to contribute immediately to the team’s success. And, perhaps most pertinently, they have a new head coach. Head coach Toby Rens will take the helm that Arlisa Williams held from 2006-2017. He was most recently the head coach for the University of Maryland-Eastern Shore’s volleyball program, which appeared in the National Volleyball Invitational Championship last year following a 27-9 regular season record. Rens’ hire also marks a return to the Big East, where he previously was the head coach of Pittsburgh volleyball from 2008-12, leading the Panthers to four winning seasons during his tenure.

Speaking positively of Williams’ job as Georgetown head coach, Rens pointed to her talent development and cultivation of the current squad. Rens looked ahead to establishing his own footprint at the school, as well.

“My predecessor was extremely professional and she built a good foundation while bringing in some very talented student-athletes,” Rens said. “I’m extremely excited to start working with the talent that we already have in the gym while recruiting future Hoyas.”

As Rens looks to incorporate the team’s newcomers while also facilitating the extant talent, the offense’s prospects will begin and end with Speech. Speech was named to the preseason All-Big East team earlier this month, marking the second straight year she has earned this honor, and she backed up the choice last year with her play, achieving one of the most decorated seasons in program history. Speech led the conference with a 37.9 hitting percentage while also placing third in both kills and kills per set and displayed her defensive prowess with 81 blocks on the season. Speech recorded her 1,000th career kill against Seton Hall on Nov. 4, becoming just the 14th player in program history to reach that mark.

For the past three seasons, Higareda has served as a reliable defensive anchor for the Hoyas. The Woodbridge, Va., native posted a sizable 3.96 digs per set during her junior year, including a season high 28 digs in the finale against No. 13 Creighton.

Sinnette has functioned as a key counterpart to Speech’s aggressive, engaged nature for the offense, and followed right in her teammate’s footsteps by becoming the 15th Georgetown player to record 1,000 kills.

But for Rens, the early talk cannot end soon enough; the players are itching for some real competition, and he is eager to see what they accomplish on the court.

“We’re more than ready to compete against other teams as opposed to each other in practice every day,” said Rens. “The team has worked extremely hard to learn new offensive and defensive systems this season. I’ve been really impressed with the direction the team is going and the buy in has been great.”

The Hoyas open the season against Abilene Christian (Southland) on Friday, as part of the Hyatt Regency Invitational. First serve is scheduled for 9:30 a.m. ET. Georgetown will then take on Idaho State (Big Sky) later that day, followed by Winthrop (Big South) and finally host Georgia Tech (ACC) on Saturday at 7 p.m. ET. Follow @GUVoiceSports for game day updates and continuing coverage of Georgetown fall sports. 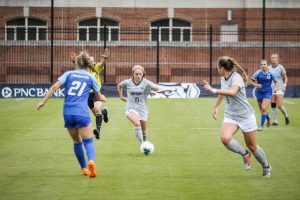 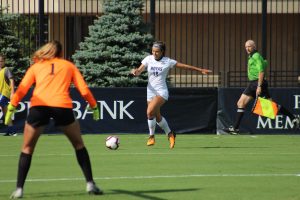 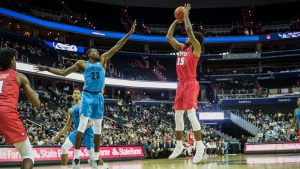