The Georgetown volleyball team (2-2, Big East) split its first four matches of the season over the weekend, at the 2018 Hyatt Regency Invitational in Atlanta. After falling to Abilene Christian (2-2, Southland) on Friday to begin their campaign, the Hoyas rebounded with a come-from-behind victory against Idaho State (2-2, Big Sky) later that night. On Saturday, Georgetown would prevail against Winthrop (0-4, Big South) in the afternoon matchup before falling to host Georgia Tech (4-0, ACC) in the evening fixture.

Friday evening’s victory over Idaho State marked head coach Toby Rens’ first victory as a Hoya. Rens was previously the coach at the University of Maryland-Eastern Shore, where he led the Hawks to regular season and postseason success.

Against Abilene Christian, the Hoyas started out strong, winning the opening frame 25-23. However, the Hoyas would lose a hard-fought second set 25-22 before floundering in the third and fourth frames, dropping them 10-25 and 18-25, respectively. Senior outside hitter Alyssa Sinnette led the Georgetown attack with a double-double of 15 kills and 12 digs, while senior middle blocker Symone Speech recorded 14 kills.

The Blue and Gray looked destined for a repeat of the first match against the Bengals, who raced out to a two-set advantage by prevailing 25-17 and 25-20. Keyed by the play of Sinnette and junior outside hitter Iva Vujosevic, the Hoyas rallied to take the final three sets 25-18, 25-17, and 15-12. Georgetown made its mark on service, where they recorded 13 aces to just 7 from the Bengals.

The third match featured a dramatic opening set that would belie the remainder of the match. The Eagles eventually prevailed 31-29 after six match points, but the Hoyas comfortably won the final three sets 25-16, 25-16, and 25-21. Vujosevic led the team with a double-double of 19 kills and 12 assists, while Sinnette added another double-double with 12 kills and 13 digs. For the match, Georgetown outhit Winthrop, posting a 21.1 hitting percentage to the Eagles’ 13.3; in part, this number was aided by nine fewer hitting errors from Georgetown.

The fourth and final match, against Georgia Tech, ended in straight sets, as the Yellow Jackets made relatively quick work of the Hoyas 27-25, 25-22, 25-19. Though Georgetown recorded 10 more kills and three more digs than Georgia Tech did, the Yellow Jackets held a significant advantage in errors, committing just 14 to the Hoyas’ 28. In the losing effort, Sinnette once again recorded double digit kills with 19.

The Hoyas return to action at the annual Georgetown Classic next Friday in McDonough Gymnasium, starting with a match against Norfolk State. First serve is scheduled for 12 p.m. Follow @GUVoiceSports for breaking news and more coverage of Georgetown fall sports. 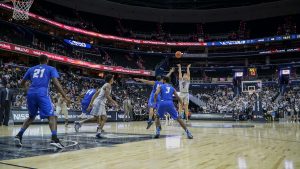 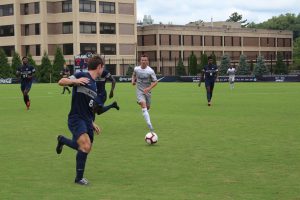 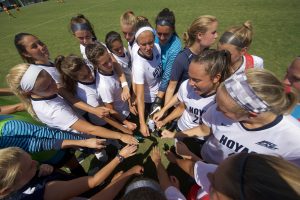