Club Lau, the Georgetown Library’s annual party held on the first Saturday of the fall semester, has been cancelled by the library’s executive committee because of funding concerns. The library first hosted the event in 2007.

“We are hopeful that the library will be able to support a revised version of this event next fall,” Library Communications and Marketing Coordinator Katherine Thomas said. “Meanwhile, the library is reviewing its events and programming with campus partners and will work throughout the academic year to continue to engage with Hoyas in other meaningful ways.”

Thomas said that the event has cost the library roughly $20,000 annually. This included paying GUPD to handle crowd control and safety measures, paying for a DJ, and for food and drinks.

Grae Hill (NHS ‘20) planned a Facebook event titled “show up to lau 2 drunk to protest no club lau this year.” Hill, who attended Club Lau her freshman year, created the event due to her frustration with its cancellation.

“I really liked it for the novelty of it though. It’s just like a joke everyone knows about,” Hill said. “Like what college let’s their library be a ‘club?’ It’s just such a Georgetown thing.”

The library is planning new programming that is student-focused but within budget. According to Thomas, the library will be hosting a number of other events this fall, including an “escape room experience,” panel discussions, and other lecture-style events. 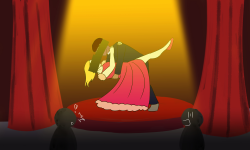