Five years ago, Troye Sivan was an Australian teen and YouTube star, coming out in front of a camera for an audience of thousands around the world. His video, entitled simply “Coming Out,” has racked up more than 8 million views and received praise from Internet personalities far and wide. But on Aug. 31, Sivan offered a more intimate look at his identity through his sophomore album Bloom, a tribute to queer love and the best pop album of 2018.

While Sivan’s debut album, Blue Neighborhood, documents a child’s first heartbreak, Bloom explores complicated, more mature problems. The album opens with “Seventeen,” the story of a relationship between a teenager and an older man. The heavily backed-up, haunting vocals are reminiscent of Sivan’s earlier songs, but the lyrics are far more intense than anything he has released so far. He repeats his lover’s assurance that “age is just a number/just like any other” but also acknowledges that he “can’t tell a man to slow down/he’ll just do whatever…he wants.”

Through “Seventeen”, Sivan narrates the plight of many young queer people. He is in his first physical relationship, but he doesn’t know what a healthy partnership between two men looks like. While straight teenagers often begin dating early in their high school years, many queer kids don’t get the classic awkward first date. For Sivan on “Seventeen,” the solution to this problem is to find an older, more experienced partner, one who may take advantage of his youth. Bloom’s commitment to representation extends beyond Sivan’s use of same-sex pronouns. The album also expresses the unique challenges that LGBTQ+ youth face as they come of age.

The album also includes a few of the singles that Sivan released earlier this year. The chorus of his duet with Ariana Grande, “Dance to This,” is sure to be stuck in your head for hours, and“Animal” is such a raw expression of love that it’s almost painful to listen to. “My My My!” is a catchy, lighthearted ode to a burning, passionate relationship, while “The Good Side” has the soft acoustic feel of Bon Iver or Sufjan Stevens. These tracks aren’t totally original-sounding and won’t ever be top 40 hits, but they fit well into Bloom’s overarching storyline. Bloom works best as a complete body of work in a way that’s reminiscent of Lorde’s 2017 masterpiece Melodrama, which never yielded any chart-toppers. Both albums hold few songs that stand out from the pack, yet all of tracks work beautifully together.

If any of Sivan’s singles are going to take off, however, it will almost definitely be the title track, “Bloom.” In a now-deleted Tweet, the usually private Sivan alluded that the song is about gay sex, creating the hashtag “#bopsboutbottoming.” The lyrics are more openly sexual than anything he’s released, as he sings “play me like a love song/everytime it comes on/I get this sweet desire.” The song is both well-written and well-performed, with a beat one can dance to and an irresistible melody. Since its release in May, “Bloom” has only charted in Australia, but hopefully the album’s debut will bring it back to the spotlight.

A few other songs from the album have the potential to make successful singles as well. On “Lucky Strike,” Sivan sings to “the jewel of California,” expressing a desire to “skip stones on your skin, boy.” The lusty lyrics combined with the infectious beat make it an easy song to sing along to, and it shows off Sivan’s clear, even vocals. “Lucky Strike” brings the listener back to intense love stories of the past as Sivan serenades a mystery man. “What a Heavenly Way to Die” packs a similar punch, as Sivan contemplates growing old with his partner. It’s not difficult to imagine a dark dance floor full of swaying couples as Sivan croons “forever is in your eyes/but forever ain’t half the time/I wanna spend with you.”

While Bloom includes tributes to a blissful romance, it also holds the bitter seeds of heartbreak. On “Plum,” Sivan laments a relationship going rotten to the tune of a catchy dance beat. With lyrics like “I was summer/you were spring/you can’t change what the seasons bring” and “even the sweetest plum/has only got so long”, “Plum” would be a tearjerker if its melody weren’t so irresistible. Bloom’s other heartbreak track, “Postcard,” features Australian songstress Gordi, and brings back memories of Sivan’s early original songs he posted on YouTube. The simple piano backing allows his vocals and lyrics to take center stage, and Gordi’s haunting bridge is beautiful.

On Bloom, Sivan is heartbroken, confused, and in love all at once. The fact that all of these emotions are being displayed by an openly gay man signifies a future in which queer art is normalized. Of course, Sivan is nowhere near the first queer artist to release music about his experience, but Bloom has the potential to take off in the way that Frank Ocean’s Channel Orange did in 2012. It could become a record in which queer and straight people can see their experiences, regardless of the pronouns used. The album deserves to be listened to as a cohesive whole rather than a shuffle through at random, and should be a contender for Album of the Year at this year’s Grammy awards. Sivan has graduated from the safe, low-stakes pop of Blue Neighborhood and moved into the dicey waters of unapologetic art, and his risk pays off. 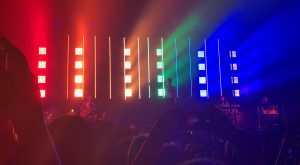 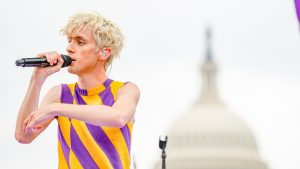