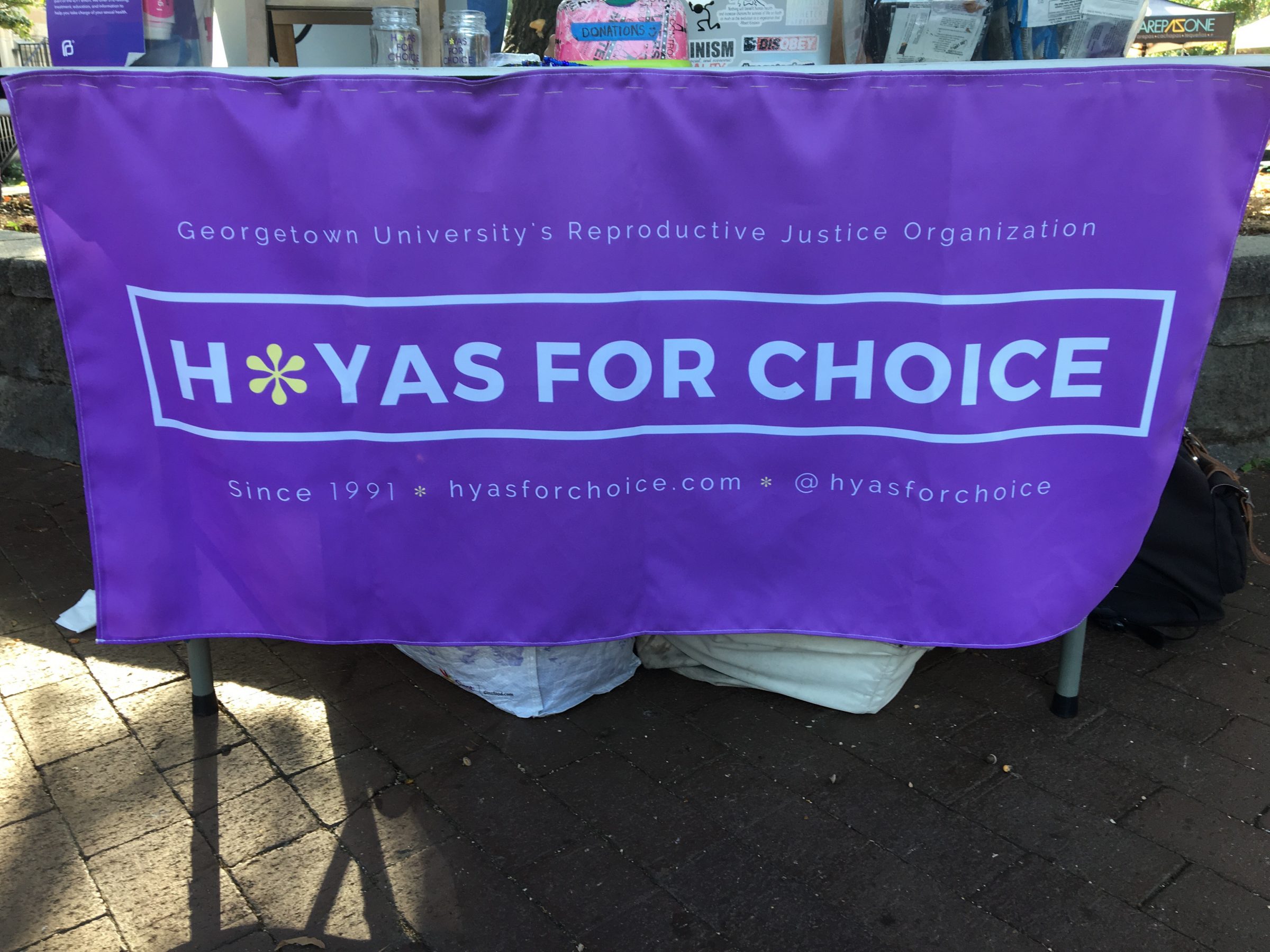 H*yas for Choice (HFC), a student group that advocates for reproductive and sexual rights and healthcare, and is unaffiliated with the university, announced they would be offering Morning After Emergency Contraceptive Pills (Plan B) on Sept. 17. Students who need the pills can email HFC, and a board member will meet them in a discrete location to provide them with the medication.

According to Rachel Harris (COL ’21), development director for HFC, they have made 13 deliveries as of Sept. 30. They initially bought a shipment of 50 pills, and have recently bought another 50.

Georgetown does not allow the distribution of contraceptives, nor does it allow for their sale through The Corp or Wisemiller’s, businesses which are on university owned property. Because HFC is not recognized by the university, and does not receive any funding from it, it does not need to abide by these rules.

Talia Parker (COL ’20), director of organizing for HFC, explained that the time sensitivity of the medication was another reason they wanted to start the program. “You’re supposed to take it as soon as you can after sex. And so having to go to CVS is difficult. With this on campus, we can meet them on campus, within like 15 minutes,” Parker said

While Plan B normally costs $50 over the counter from CVS, HFC has only a $10 suggested donation. Elianna Schiffrick (SFS ’21), HFC co-director of communications, stressed that they “wanted to make sure this service is accessible to everyone.”

Early in the semester, HFC board members decided to pay for the first shipment of Plan B out of their own pockets. Since their announcement, they have received another $2,500 in donations. Due to the lack of university recognition, the Plan B program is solely dependent on donations.

Plan B is taken orally, and contains a high-dosage of levonorgestrel, a sex hormone which controls ovulation. The pill prevents the ovary from releasing an egg and alters the amount of cervical mucus present, which lowers the chances of conception. However, it is an emergency contraceptive and is time sensitive, and need to be taken within 5 days to be effective.

Harris recalled the inception of the program this summer. “We were talking as a board on how to transform H*yas for Choice. We’ve been providing condoms for 20 years. But what else can we do? Can we push the boundaries?,” she said. “I know Kory, our vice president, mentioned it, and we were like ‘that’d be super cool if we could figure it out logistically’ and here we are first month in and we have it.”

Despite the program, Schiffrick feels that providing for the sexual healthcare of students should be the responsibility of the university. “The burden of it is falling on a group of undergraduates who are unrecognized, and as a group we do a decent job, but it is ultimately a lot of work for students who come into this with not a lot experience,” she said.

Georgetown University College Democrats expressed solidarity with HFC. “This is an incredible achievement in reproductive justice for the Georgetown community, and [we] know that this will help so many students” they wrote in an email to the Voice. “GUCD supports reproductive rights and the mission of H*yas for Choice full-heartedly, even though our status as an access to benefits group restricts how we can show support for reproductive justice.”

Amelia Irvine (COL ’19), co-president of Love Saxa, a group which advocates for traditional marriage, wrote in an email to the Voice that the creation of the program disappointed her. “Easy access to emergency contraception can only lead to more men in dorm rooms late at night pressuring women to have sex without a condom,” Irvine wrote. “Plan B ultimately liberates men by making sex easier to obtain, and its natural consequences easier to avoid. The only truly effective method of birth control, the only method that allows women more emotional freedom and stability, is abstinence.”

After the programs first few weeks, its future is still being decided. Because the program is responsive to the individual needs of students, any future orders of the medication is dependent on increased need. Harris reflected that this is still just a first step. “We haven’t thought long-term yet,” Harris said. “We wanted to do a test trial, and see how it would be received amongst students as well the administration.”