Valentino Dixon was exonerated of murder charges and released from prison through the efforts of the Georgetown Prison Reform Project on Sept. 17 after serving 27 years behind bars.

According to the Prison Reform Project’s course description, the class focuses on wrongful conviction cases. The two professors, Marc Howard, director of the Prisons and Justice Initiative, and Marty Tankleff, adjunct government professor, decided to take on four cases for their students to handle—one of those being Dixon’s.

Dixon’s case began in 1991, when he was convicted for the murder of Torriano Jackson. Jackson was killed during an altercation at a party which both men were attending. Dixon was arrested and charged for the crime, despite no physical evidence, conflicting testimony, and the confession of another man to the murder.

Even with the mounting evidence in Dixon’s favor, nothing was done, and he was sentenced to 36 and a half years in prison, mostly at the Attica Correctional Facility in New York. Frank Sedita III, the longtime district attorney of Erie County, had no interest in revisiting the case.

In 2012, Dixon’s case attracted national attention when Golf Digest profiled him and his prison hobby, drawing golf courses. Dixon recounted how he spent his days elaborately sketching the courses, even though he had never stepped foot on a golf course prior to his imprisonment.  The magazine story drew the attention of the national media, and, eventually the Prison Reform Project.

Howard and Tankleff, who started the Prison Reform Project at Georgetown, are distinctly qualified to teach this class due to a shared personal experience. The two were childhood friends, and in their senior year of high school, Tankleff was wrongly convicted of his parents’ murder. Tankleff would go on to spend nearly 18 years in prison until he was exonerated thanks to the help of Howard, who dedicated years to freeing his friend.

The experience caused Tankleff and Howard to continue fighting for wrongfully convicted prisoners, manifesting in the Prison Reform Project. Over 50 students applied for the class, and 16 were chosen after a rigorous application process. Of the 16, Julie Fragonas, Isobella Goonetillake (COL ’18), and Naoya Johnson focused on Dixon’s exoneration.

In addition to legal issues, there was a human element that the class needed to deal with. “It was pretty difficult at first because Valentino had a lawyer, and he didn’t really want us to help out in the first place,” Goonetillake said. “I think he thought we were getting in the way or we were just students. Also, I think it was very hard to work in a group. This was very high stakes for a group project and group projects are usually hard most of the time.”

Despite the complications, the team of professors and students remained dedicated to the cause. “It’s really hard to re-investigate a case, and it’s really hard to track down evidence,” Howard said. “In every case there was a time where we felt we were at a dead end. Then somehow, we’d get a break. That was through persistence, and that was a through a lot of hard work.”

In Dixon’s case, one of these breaks included the election of a new Erie County District Attorney, John Flynn. “When a new DA has been elected, you have a higher success rate on wrongful conviction cases because those in power now don’t have a connection or link to previous people involved,” Tankleff said.

While the team planned to capitalize on Flynn’s new leadership, the students still needed to present him with key evidence proving Dixon’s innocence. They uncovered a shocking revelation when the prosecutor of the original murder charge admitted on camera that he had withheld evidence from the defense– evidence that would have proven Dixon’s innocence. With this confession, the team took the case to Flynn, who then granted their appeal.

Finally, Dixon was released from prison.

Dixon is now thriving and enjoying life as a free man. He was reunited with his family and has decided that he wants to give back and assist with the Prison Reform Project in anyway he can. Since leaving prison, he has also kept up with his old hobbies. He is still drawing golf courses and was even commissioned for a drawing for American Ryder Cup captain Jim Furyk.

Howard and Tankleff were pleased at the outcome of the class. “The ultimate goal, which I think we achieved, was to get one person out of prison,” Tankleff said. “Our dream would be to have success stories with all our cases, but we acknowledge that wrongful conviction cases are the toughest and most challenging aspects of the criminal justice system.”

Even with the difficulties, the class was able to accomplish what it set out to do. “It is nice to have a happy ending in a field where there is a lot of sadness and injustice,” Howard said. “At the same time, it makes me all the more committed to our other cases that we are fighting for and hope to be exonerated.”

With such a successful outcome, the members of the team left the class feeling accomplished.  “I think it is really a testament to how much undergraduates can achieve in such a small space of time,” Goonetillake said. “I think it was a group effort, but the class was really instrumental to getting Valentino out.”

While the course changed Dixon’s life, it deeply affected the students as well. “I really know I want to work on criminal justice reform, and continue to do this kind of work,” Fragonas said.

Goonetillake hopes to pursue a career in the field as well. “I think you couldn’t not want to do that after the class,” she said. While the Prison Reform Project is a 5 credit course, it’s impact extends well beyond the classroom.  “You are going to work your butt off outside of class, but the impact that you will have on society and an individual will give you the best feeling in the world,” Tankleff said. “How often, as an undergraduate student do you take a college class and have a real world impact on someone’s life?”

The class will be returning this spring with more cases and more prisoners. While Howard, Tankleff and all the members of the Prison Reform Project team are proud of the work they have done, the job is not finished.“We have one out and three to go, and we are going to have more cases next semester—Kenneth Bond; John Moss III; Tim Wright,” Howard said. “They are also innocent, and they haven’t been as lucky as Valentino yet, but we’re going to keep doing what we can to correct those injustices.”

Even with more work to do, the teachers of the class were proud of what their students had done. “They surprise me because they just went the extra mile. They really did crack the case open,” Howard said. “I think it’s fair to say that three Georgetown students really did get a man out of prison. And that’s extraordinary.” 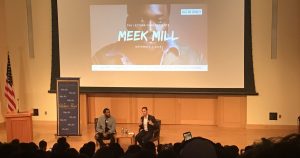