Kip Berman Celebrates His Birthday In D.C. With New EP and Songbyrd Concert 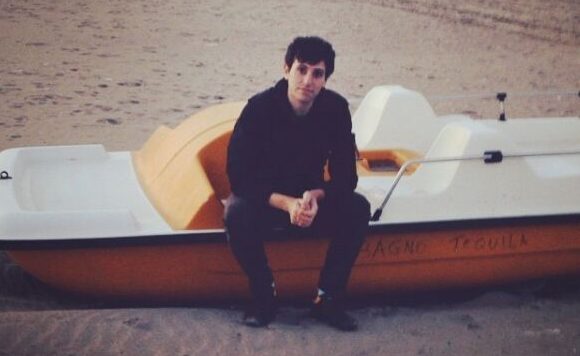 The opening chords of The Natvral’s Know Me More are simple and comforting, the kind of notes that glide through a quiet café with ease and linger in the atmosphere with the warm aura of an afternoon coffee. This is not surprising, as the Natvral itself is nothing more complicated than a man—Kip Berman—and his guitar. Berman, the founding member and frontman of indie pop band The Pains of Being Pure at Heart, has spent the last year exploring a different genre of music, writing an EP under a new artist name, and, most importantly, raising his daughter. These experiences culminate into the effortlessly beautiful 13 minutes of Berman’s latest work, whose release today coincides with two other special occasions: his birthday and his concert at D.C.’s Songbyrd Record Cafe and Music House.

Know Me More marks a stark divergence from Berman’s earlier work with The Pains. In comparison with The Pains’ upbeat dance tracks, The Natvral’s music is more of an acoustic lullaby. “Songs started coming out of me in a different way. And I was grateful to have the opportunity to capture that.” Berman said in an interview with the Voice.

Fatherhood marked a pivotal moment in Berman’s trajectory as an artist, creating the environment that would allow him to experience music in a new way. Berman recognizes that the music he created for The Pains was about a certain chapter in his life when he was younger and had moved to New York. Now, raising a daughter in New Jersey, his musical interests and style have undergone a transition defined by a different sense of maturity and a strong love for his family.

“These are the kinds of songs I can play for [my daughter] in the living room. There is something nice about music that I can share, not just with her but with older members of my family, like my grandparents and my mom. Everyone’s always been excited about what I’m doing, but this is the first time I’m doing music where it lines up with what my mom would listen to even if it wasn’t her own son,” Berman said.

This concept of “living room music” extends itself beyond Berman’s own home, where he plays songs for his family, and roots itself in the heart of his new musical project as The Natvral with music that can he can play  anywhere. “[Know Me More] was all recorded pretty much live. I was playing guitar and singing at the same time, and I just sort of pushed ‘record.’ And those are the songs, which is really different than the way I’d approached music before. It was really liberating in a lot of ways because it was just so free and unconstrained by a lot of aspects of music,” he said.

He wanted his music to feel less restricted by the hassle of enabling and finding all the equipment and other necessities for the recording process: soundcheck, space, amps, a metronome. “It opens up so many more possibilities in terms of spaces I can play songs for people. I can play someone’s living room if they want me to. I just don’t have to say no to things for reasons that seem unnecessary.” Berman said.

Despite this nomadic quality of his music, Berman is playing venues bigger than living rooms while on tour this fall. He kicked off the tour on Oct. 1 with four nights of concerts in Brooklyn and will continue performing, mainly around New England, with an exciting stop in D.C. tonight. Berman, performing as The Natvral, will open for indie band Tallies in their free concert at Songbyrd. Not only is tonight special because of the release of Know Me More earlier today, but it is also Berman’s birthday.

“It was kind of funny because I remember my first Pains’ tour included my hometown on my 30th birthday. That was such a momentous thing, to be like, ‘I turned 30. I’m finally in this band. I got to do all this cool stuff, and I’m playing a show where my mom’s at it, in my hometown in Philadelphia.’ And now it’s like this new chapter of my life is starting on my birthday again, and I think that’s really nice. It just kind of lined up that way, so it’ll be a fun time for sure.” Berman said.

Know Me More is the introductory paragraph of this new chapter in Berman’s life, yet, he does not see The Natvral as a solo endeavour. “I was the only full time member of The Pains of Being Pure at Heart as well, but the chance to create a new artistic voice felt like it needed a new name. And just saying my own name didn’t really get at what I was trying to convey,” he said.

“You want to make something that’s a little bit more than just your own reality, to write about things that might not just be or seem to be your own point of view or your own autobiographical account. And I think if you record under your own name, there’s this assumption that everything you write is just how you, Kip, feel about the world,” Berman said.

Berman’s new music amounts to so much more than a solo EP—it’s a new era for him, a project influenced by his shifting sense of identity. Becoming a father changed the course of his art, both in style and in content, guiding him towards soulful acoustic melodies that he can play for his daughter, or really, anyone, anywhere, as long as he has his guitar. And soon, he’ll get the chance to play it for his second child as well, who he and his wife are expecting in November.

“I’ll be staying home with my new baby while my wife goes back to work and stuff, so I wanted to get this EP out in in the world and play some shows for people before my life is going to be turned upside down again with my new baby,” Berman laughed. “And I’m going to continue playing this music and recording more.”

With more excitement on the way for his family, Berman may not be on tour again for a little while. If his recent artistic journey has taught us anything, it is that having a child vastly changed his experiences and his music. His current fall tour may be the first and last opportunity to see him as he is right now, as having a second child will undoubtedly bring about fresh changes in his creative perspective.

“I’m going to keep on recording as The Natvral and keep on kind of building and trying to get a little bit better each time.” Berman said.

From the lively and young spirit of The Pains of Being Pure at Hearts’ “Young Adult Friction” to The Natvral’s touching and soft “Know Me More,” Kip Berman’s musical imagination has shown a clear evolution. It’s not hard to determine what he was thinking about when he wrote his new song, “Home.” Even the EP’s name inspires listeners to think more deeply about how well they truly know the artist they are listening to. As Berman has gotten older and had a family, he has sought out a different way to express himself. This, like any evolution, is only natural.

Kip Berman will be performing for free tonight in Songbyrd’s Vinyl Lounge at 8 PM. The doors will open at 7 PM. More information can be found here.

More: Kip Berman, Know Me More, The Natvral, The Pains of Being Pure At Heart