Drawing Dissent: Defining the Art of Change in the Age of Trump 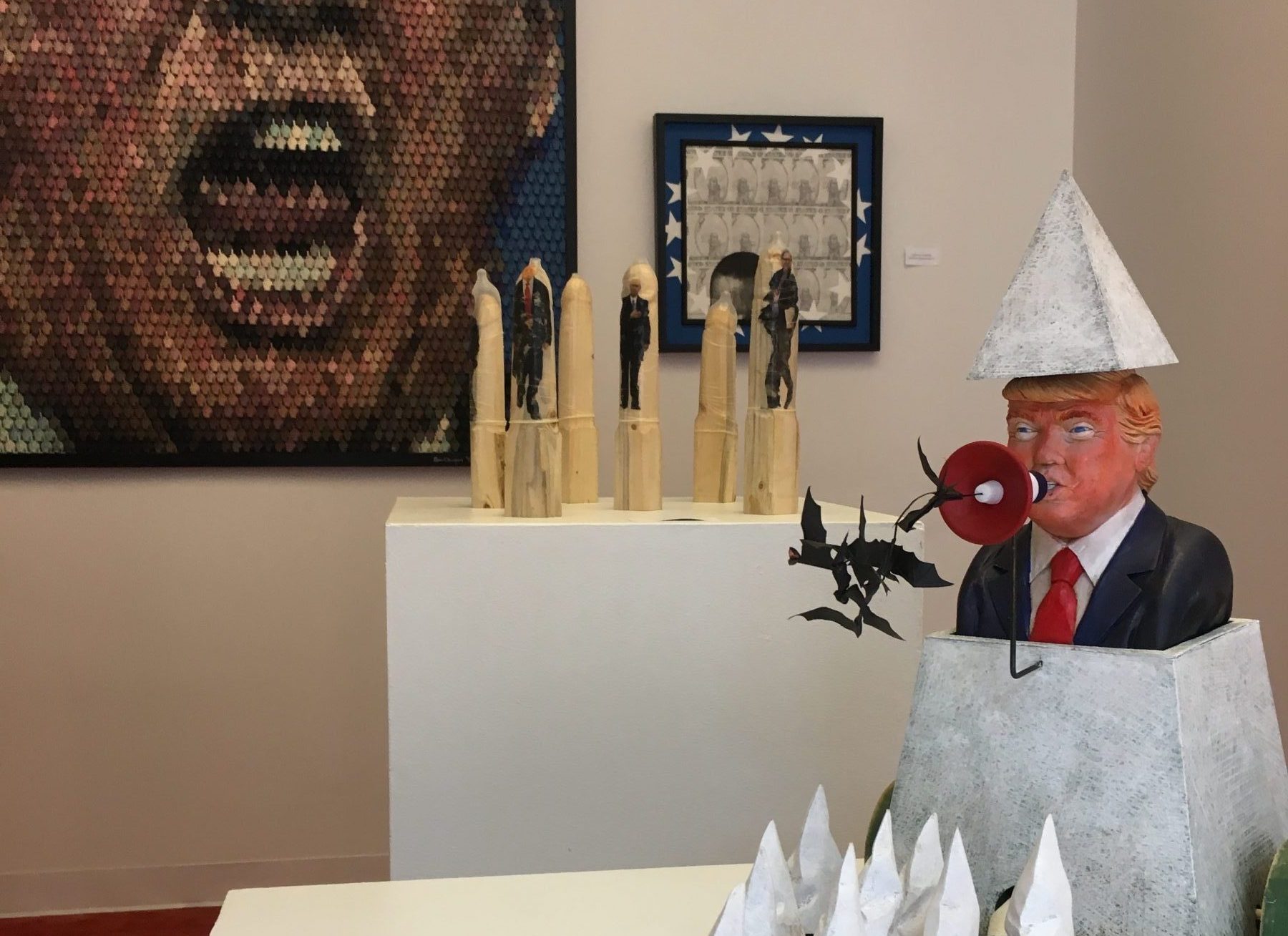 The Center for Contemporary Political Art’s (CCPA) current exhibition, “Defining the Art of Change in the Age of Trump,” does not play to the tune of a soloist but the symphony of an orchestra. Both in intensity and diversity, the gallery is a convergence of voices from across the art world looking to educate and engage Americans all over the country. On display through Nov. 14, it showcases American artists’ response to the current political landscape under the Trump administration. Given that the only direction given to artists for submissions was the topic of Trump, it is compelling that the only commonality among these works, other than their focus on the president, is their solidarity in opposing him.

“It’s not just one thing that’s being shown here,” said CCPA board member Judy A. Greenberg in an interview with the Voice. After retiring from her position as the director of the Kreeger Museum in New York last year, Greenberg joined the CCPA with the express purpose of providing politically-driven artists an outlet to showcase their work.

“I was very distressed with what was going on in this country, and after I retired, I was approached by Robin Strongin and Charles Krause about a new endeavor—developing a center for contemporary political art,” she said.

Founded by Charles Krause in 2017, the CCPA is a non-profit organization that provides artists a platform to vocalize their political views by commissioning and exhibiting their work. Greenberg said that Krause sought to establish the CCPA following his experiences as a foreign affairs correspondent for organizations like CBS and The Washington Post. During excursions to Latin America, the Middle East, and central Europe, he interacted with many artists who, because of the political nature of their work, were unable to exhibit their art to the public without risking jail time. Seeing these restrictions abroad, Krause founded the CCPA to ensure similar injustices do not stifle the domestic American art world.

The first of the CCPA’s public exhibitions in Washington, “Defining the Art of Change in the Age of Trump” has been an undoubted success in this respect. After the formation of its board only one year ago, the CCPA held an open call for artists from all 50 states, as well as Puerto Rico and the D.C., to submit their work for display. In response, over 500 pieces were submitted by almost 300 artists from all corners of the nation.

Of these 500 submissions, not a single piece supported the Trump administration. The message, however diverse in its method of delivery, is clear when taken as a whole: The art world is unafraid to vocalize its dissatisfaction with the status quo under Trump.

The most striking aspect of the collection is the sheer number of angles from which the Trump presidency has been critiqued by different artists. This artistic resistance manifests itself through a diverse series of mediums, topics, and tones. This is not an exhibit that just explores women’s issues or immigration policy in the age of Trump, though these are both common themes. It addresses a multitude of affairs, ranging from freedom of the press, racism, and obstruction of justice to gun violence, corruption, and Twitter.

The entrance to the studio is ornamented with multiple works ranging from satirical to somber. While one is immediately greeted with caricatured toy Klansmen pulling a Trump statuette along in a white cart, such dark comedy in no way detracts from the more serious tones of other features. One piece, Michael Wartgow’s “The New Social Conscience,” is a compelling amalgamation of the creator’s many grievances with the current president. Centering on an eagle impaled by a flagpole at half-mast in honor of John McCain’s passing, the picture is filled with details like Fox’s logo and an ominous, scarlet silhouette of the Kremlin looming over a horizon covered in Trump’s tweets.

The emphasis placed on the haziness of the Trump campaign’s connections to Russian intelligence operations is one of the more frequently highlighted concerns among the contributors. In Catherine Johnson’s “Who’s Your Daddy?” Trump is depicted as a Russian soldier, dressed in military garb with a rifle in hand. With the Soviet flag waving in the background, the portrait of the president has the caption “СЛУЖУ СОВЕТСКОМУ НАРОДУ!” which translates to “SERVING THE SOVIET PEOPLE!” By referencing Soviet-era propaganda, Johnson beautifully satirizes Trump’s perceived affinity for the Russian Federation and, more specifically, Vladimir Putin. Joining Johnson’s referential Soviet piece was a variety of other depictions of this alarming relationship, including shirtless GOP elephant rides and a shadowy Putin emerging from the mouth of the president.

Among the array of work, there is one piece that best captures the underlying tone of the exhibit at large. Zac Benson’s “Life Preserver” is what it claims to be—a life preserver, old and used, mounted on the gallery wall. In the typhoon of reporting and rapid-fire developments that comprises an average day in the current political climate, one may feel as though they are sinking, drowning even, in the resulting floodwaters of news. For the artist, this token mounted on the wall is a reminder that these waves are not insurmountable. So long as he holds fast, wears his life preserver, and remains engaged, his head will remain above water.

More than this, the piece is honest. This life preserver, hanging there immobile, is exactly as it appears. It has no ulterior motive, no agenda, no ego. It will not lie. One may look at it, hanging there, and know for certain that it is an undeniable element of truth. It is a life preserver, there only to assist and safeguard. Nothing more, nothing less.

Benson’s “Life Preserver” conveys the freedom granted to the exhibition’s contributors, and it shows how through that freedom the status quo may always be challenged. It conveys the simplicity of their message, and how even with diverse forms of expression, these artists are able to build a cohesive and unified rejection of Trump’s politics. Above all else, however, “Life Preserver” symbolizes the honesty on display by the exhibit, and how passionate vocalizations of opinion, when amassed together, can create a movement that is motivating, creative, and immensely powerful.

More: Center for Contemporary Political Art, Defining The Art of Change in the Age of Trump

John,
I want to thank for a beautifully written and thoughtful critique of the Defining exhibit. You have a very good eye and interesting sensibility; your review has forced me to take another look at some of the pieces in the exhibit that I hadn’t thought much about since the jury plucked them from the 500 submissions for inclusion in the show. Political art has been the ugly duckling of American art since at least the end of World War II. But it is now emerging and I believe the Defining exhibit will one day be seen as a turning point in the history of American art in the 21st Century; the moment when art began to become a respected and accepted part of our national political discourse and its impact became a factor art historians and collectors began to consider when assessing the importance and value of individual works of 21st Century American art. Your critique will be one of first things they’ll have to read to understand how that art was received when it first appeared. Bravo!

Thank you very much Mr. Krause!

Very impressed with my grand nephew’s insightful prose and critical eye. I wish I lived in D. C. so I could attend this show.