Trust and convenience in Hunter Killer 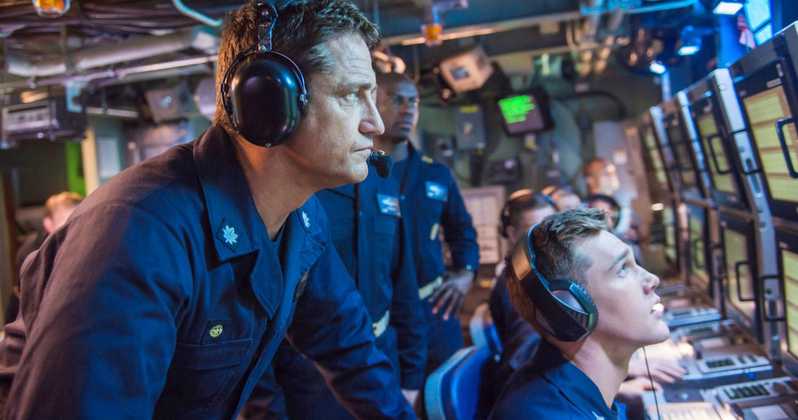 Hunter Killer starts underwater, outside of a hulking steel submarine. Inside of it, a human crew is briefly introduced. The men controlling the monitors talk and joke back and forth, and their captain reprimands them for the chatter. There’s nothing immediately spectacular here, but the heart of the film is introduced in these  opening moments. There’s an emphasis on the complexity of people and relationships in Hunter Killer that makes it more than your average high-stakes action film. “It’s a crazy, fun movie, but [also] surprisingly thought-provoking and human. There’s a lot of humanity in the movie,” Gerard Butler said in an interview with the Voice. Though partially reliant on distracting conveniences, Hunter Killer excels at emphasizing the complexity of emotions involved in international conflict.

Following an unprovoked attack on an American submarine, Captain Joe Glass (Gerard Butler) of the U.S. Navy is tapped by the Department of Defense to lead a rescue mission into Russian waters to gather information. Glass, a “pull your big boy pants up, and let’s get on with it” Captain, in the words of Butler, is soon faced with a much bigger task than originally thought: to save the Russian president. The crew of Glass’ rescue mission aboard the USS Arkansas soon learn that the attack was caused by a Russian despot who is attempting to bait a war between Russia and the United States. In order to stop it, the Russian president, who is being held hostage, must be rescued.

The stakes of Hunter Killer are high, but the complexities in the relationships between characters will resonate with viewers, and help to bring the film down to earth. Midway through their rescue mission, the crew of the Arkansas find the bombed-out remains of a Russian submarine on the ocean floor, and Glass orders his crew to rescue the survivors. One of the survivors  is the ship’s captain, Andropov (Michael Nyqvist). When the two commanders end up needing each other, their respective loyalties to their countries complicates their relationship.

“It’s kind of an example of the silent service not just in America but all over the world, the wisdom and training, and integrity that goes into both sides. And how they both have to stick to their guns, literally and figuratively, in terms of defending their country, defending it’s honor, defending its security, and then having that challenge their own moral compass, and their own kind of, let’s say, higher purpose. I loved the quietness and deliberations that [Andropov] had to go through, and the bond, this strange, weary but almost respectful and loving bond that forms between the two of us… more than anything, it was the brilliance of Michael Nyqvist,” Butler said.

The tension between the two Captains is made all the more palpable by the excellent performances Myqvist and Butler, whose close, off-screen bond translates onto the screen with ease. During our interview, Butler emotionally recalled his respect for the acting ability of Nvquist, who passed away just a few months before the film’s release.

One of the main themes of the film, the role of trust, is born in part of the relationship between Glass and Andropov.

“One of the themes that I love about this movie is trust and loyalty. You know, it’s trust between a U.S. captain and a Russian captain who are diametrically opposed and yet the same. And that trust is all that stands between the world and devastation. Trust between a submarine commander and his crew, because it’s his first time in charge of them, they have no bond yet, no trust, no, kind of, ethical ground to work with. And they’re thrown into this hellish situation where their life is very much in his hands… Trust between two superpowers, and then also trust and loyalty between two captains to their own country, and having to make decisions that are going against the war room and the decisions being made from there,” Butler said.

Faced with the difficult choice between one’s country and one’s morals, the trust between all of the characters remains precarious throughout. Of this tension, Butler revealed that even having seen the film many times, the characters’ actions remain surprising to him.

Whether trust will prevail would be an easily answered question in a stock, predictable action movie, but here, the complexity of the characters and the precarious relationship between Glass and Andropov especially keeps the audience guessing the ending throughout the whole film.

Where the character relationships ground the film in reality, silly conveniences hinder Hunter Killer. Perhaps most glaring of these is the continuous lack of protocol. The U.S. Navy, a government organization of the highest order, is almost certainly too bureaucratic to allow a single captain to make moral decisions related to international security on a whim. Definite protocol breeches that are made A-OK within this imagined system make the viewer wonder, “Can he really do that?” The plot’s over-reliance on them ultimately detracts from the realness of the film.

In addition to this, on two occasions, separate characters who were wounded and left for dead return just in time to save the day. These moments are distracting and unrealistic, and do not do justice to the film’s intention of emphasizing humanity in dire circumstances. Similar to the other conveniences of Hunter Killer, they exist solely in service to the plot, and actively reduce the realness of the situation. With such high stakes (essentially the world teetering on the edge of World War III), realistic details in all other aspects of the film are completely necessary. In this respect, Hunter Killer falls into the stock action-movie trap of excessive movie magic.

Despite its reliance on conveniences, the heart at the center of Hunter Killer is the film’s true hero, saving it from being another commercial action movie. The precarious relationship between Captains Glass and Andropov adds palpable tension and excitement, while also drawing attention to the message of trust. Aided by the strong performances of Butler and Nyqvist, Hunter Killer manages to put the human at the center of this high-stakes, exciting action film.