Washington Magic brings the district a night of food, tricks, and inspiration 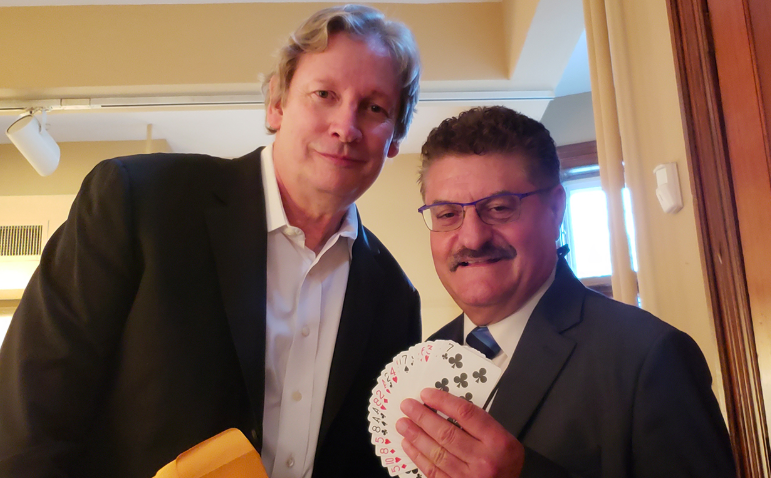 We could all use a little magic. That’s the idea behind the new show, Washington Magic, that is currently captivating sold-out audiences in the historic home of James Monroe. Led by two of the nation’s top magicians, Savino Recine and David Morey, Washington Magic is an evening of fine dining, cocktails, and most importantly, an awe-inspiring magic show.The performance is the ideal blend of traditional and innovative tricks. Audiences will find themselves tricked, but most importantly, inspired, by Washington Magic.

Looking at the separate track records of Morey and Recine, you wouldn’t believe that the two are now magicians. Morey has been a strategic consultant for presidential campaigns, including Barack Obama’s, and major corporations including Disney and NBC. He is also a co-author of the recent publication Creating Business Magic, a business management book about the power of magic as a strategic tool. During an interview with the Voice, Morey described magic as his hobby out of control.

Recine’s background, on the other hand, revolves around food. He has owned many popular restaurants in the D.C. area including the wildly popular Primi Piatti, and has often hosted special evenings of magic over elegant dinners. His real passion, however, is magic..

The two fell in love with magic as kids, and are excited to be bringing their eclectic act to Washington. Audience members at Washington Magic can expect a performance that brings together a range of different styles.

Recine’s act focuses on magic of the mind, and includes prediction magic, wowing audiences not only by reading their thoughts, but also by revealing their hopes and dreams. His sense of humor is embedded in his style; he is able to keep audiences laughing while also “having fun with the impossible,” as he puts it. Washington Magic also includes innovative, exciting stage tricks, one of which took Recine 15 years to learn and involves precise swordwork.

One of the driving ideas behind Washington Magic is Recine and Morey’s belief that magic is a powerful force of influence, one that is most effective in-person.

“Magic is big now—in shows, movies. People haven’t actually seen it up close, though. When people see magic in person, the room changes. [Washington Magic is] going to fool you, but more than that, we’re here to inspire you—to do better, feel better. Be better,” said Morey.

It is Morey and Recine’s hope that Washington Magic will continue to inspire audiences for many shows to come. Moving forward, the duo is expecting the show to grow as they bring in big names in magic, and keep their show fresh for new audiences. Their vision is inspired in part by the Magic Castle in Los Angeles, where a different magician performs every night. Morey and Recine hope to see Monroe House grow similarly to become their home base for performances, a place where visitors can come and experience magic more regularly. John McLaughlin, the former Deputy Director of the CIA-turned-magician, who also co-authored Creating Business Magic with Morey, will likely be making an appearance in Washington Magic’s upcoming shows, along with Eric Henning and Kabir Khan, an internationally acclaimed Malaysian magician.

Morey and Recine’s love for magic and belief in its power has culminated with Washington Magic. Their different backgrounds mix magic as a tool, for Morey’s part, with magic and food, for Recine’s, to make for one elegant evening of fine dining and entertainment. Their next show will be on November 17th at 6:30pm in the Monroe House.

Tickets for upcoming shows can be purchased through their website.

[…] love Washington Magic. Check out the Georgetown Voice and The Washington City Paper  and come see how much fun people are having […]