Nov. 8 is the last day of for Georgetown’s graduate students to vote on whether or not they want to unionize and be represented by the Georgetown Alliance of Graduate Employees (GAGE) and the American Federation of Teachers. An estimated 1,100 students in the Graduate School of Arts and Science who have served as research assistants, teaching assistants, or teaching associates since the fall 2017 semester are eligible to vote. 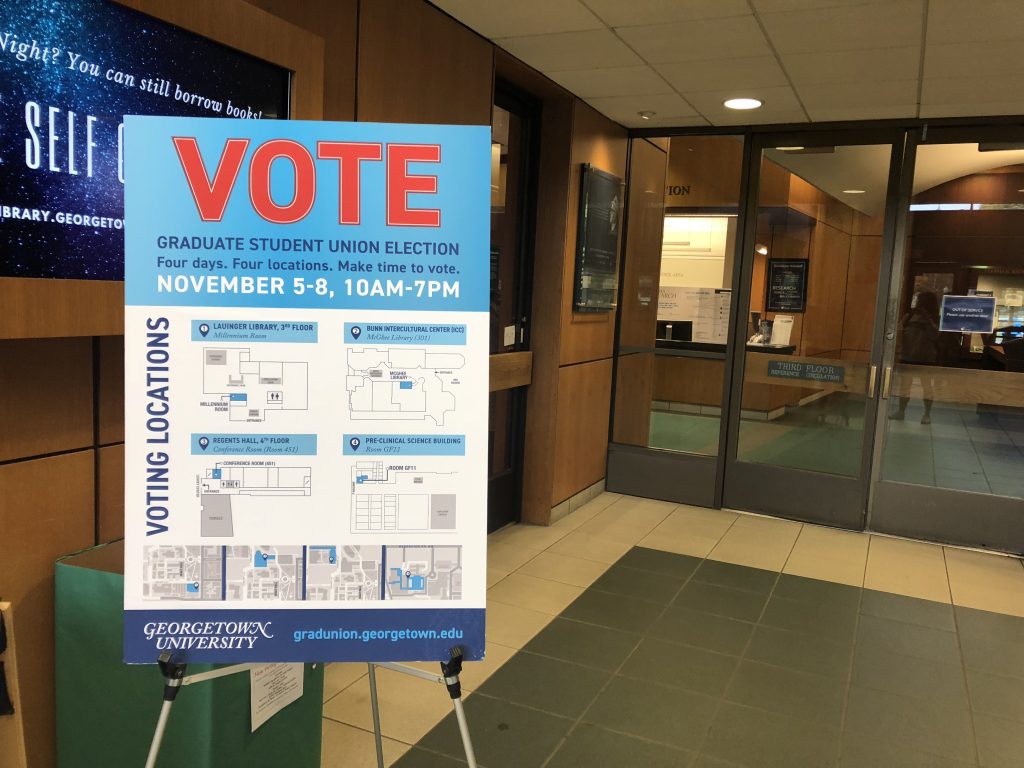 A sign outside the polling place in Lauinger Library

Polls have been open between 10 a.m. and 7 p.m. at four locations around campus since Nov. 5. A notice of election on the university website explains that the process is a secret ballot election overseen by the American Arbitration Association.

Sara Kolmes, a doctoral candidate in the Philosophy Department and GAGE member, expressed her support for unionization. “We have no power in the relationship, and so officially the university could change anything about our contracts,” Kolmes said. “Having a seat at the table would be a good thing.”

Other students had similar opinions. Krista O’Connell, a second year student at the McCourt School of Public Policy, wrote in an email to the Voice that she is uncertain about how to present complaints to the university. “There’s no clear complaint process or advocate for graduate workers,” O’Connell explained.

O’Connell also outlined some of her specific concerns as a graduate student. “I wish that there was a more transparent hiring and timekeeping process, consistent and predictable hours, and better compensation for the high cost of living in D.C.,” O’Connell wrote.

Michael Lawrence, a first year graduate student studying English, explained why he believes a union is necessary in the first place. “Graduate Worker Unions around the country have greatly improved their working conditions by negotiating contracts with their universities as strong bargaining units,” Lawrence wrote in an email to the Voice.

Lawrence is also a Vote Yes Organizer with GAGE, which entails phone-banking and encouraging eligible students to vote. “Graduate employees have much greater success when they stand together,” he wrote.

Kolmes said that the benefits of unionization would extend not just to graduate students, but the entire Georgetown community. “Treating grad students as employees is also going to be really good for the undergrads because we teach such a significant portion of undergrad classes,” she said.

In an Oct. 22 letter announcing the election to the Georgetown community, the Provost’s office promised to continue to promote the rights of graduate students, regardless of the outcome of the election. “Georgetown will continue its efforts to improve conditions for graduate students if a union is not elected and will bargain in good faith if one is elected,” the announcement reads.

The vote fulfills an Apr. 2 agreement between the university and GAGE, the latter of which has been advocating for unionization since 2016. If a majority of graduate students vote in favor of unionization, GAGE and the American Federation of Teachers will officially represent them in collective bargaining. Currently, the university does not recognize any such entity.

In its announcement, the Provost’s office stated that the two parties had come to an agreement regarding the vote. “We’re committed to ensuring that members of our community have a voice in their experience,” the announcement read.

Rachel Pugh, a university spokesperson, outlined the vote’s significance. “The agreement creates a framework recognizing that graduate students’ relationship with the University is fundamentally an educational one, while also responding to their desire to have a stronger voice in the terms of their service as Graduate Student Assistants,” Pugh wrote in an email to the Voice.

Similar votes, such as at Columbia University, have been overseen by the National Labor Relations Board (NLRB), but Pugh highlighted the importance of Georgetown’s decision to work with the American Arbitration Association. “If the NLRB or another court overrules the Columbia University decision and finds that graduate students are not employees eligible for unionization our agreement with GAGE will continue,” Pugh wrote.

O’Connell predicts unionization will bring about positive change. “Graduate workers need an advocate that can champion our rights and concerns across graduate departments,” she wrote. “Alone, I have no power, but together, we have a resounding voice that can no longer be ignored.”