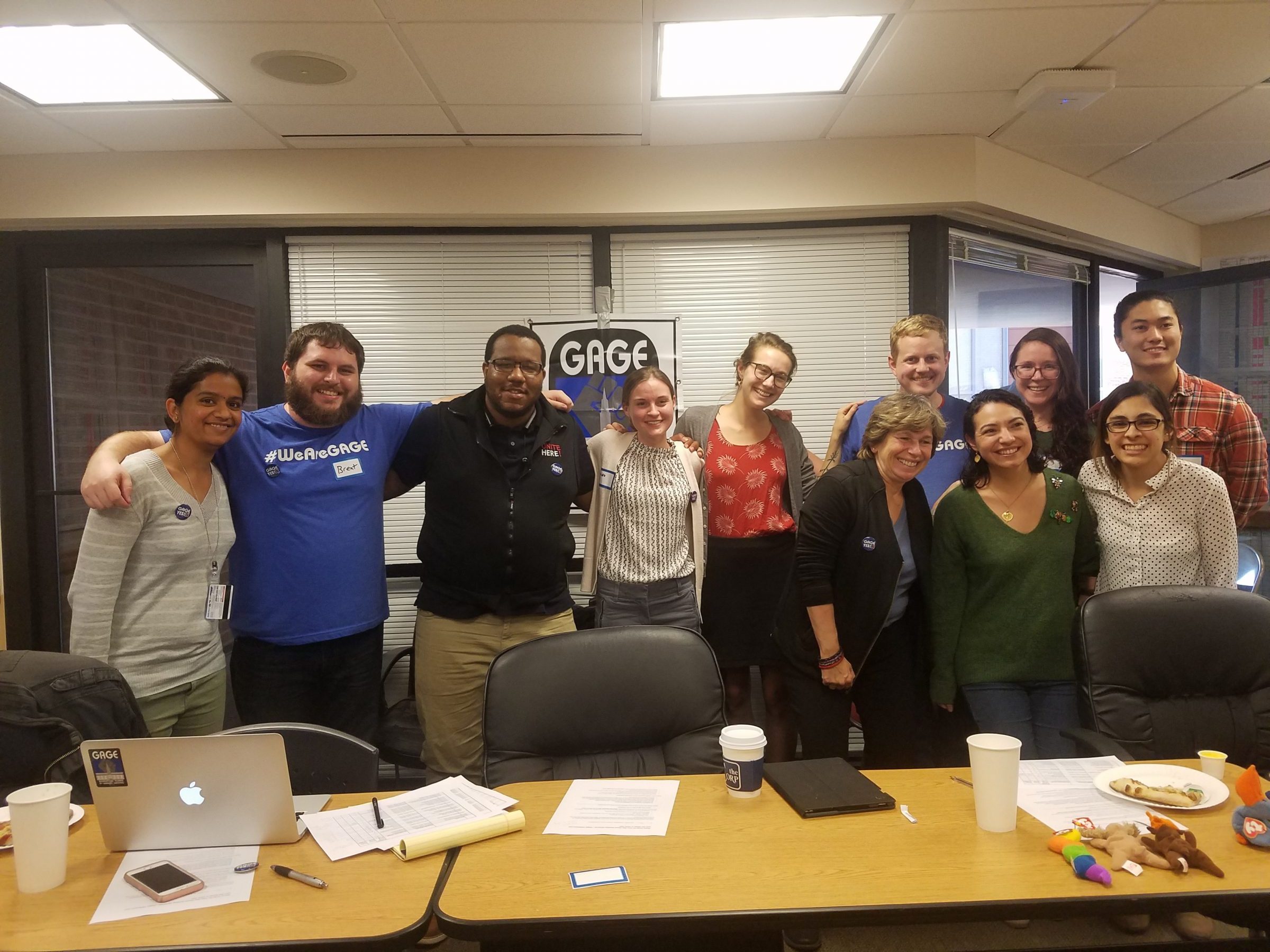 In an ICC conference room on Oct. 31, volunteers for the Georgetown Alliance of Graduate Employees (GAGE) made calls to voters in the upcoming graduate student worker unionization election being held Nov. 5 to Nov. 8.

Approximately 1,000 graduate students will vote on whether to formally recognize GAGE as their union. If a majority votes in favor, Georgetown will bargain with the union on issues like graduate student employee pay, working conditions, and hours as it agreed to in April.

The room was decorated with a vinyl GAGE banner hung in the window, and pizza sustained the callers over the lunch hour.

Hailey Huget, a seventh year doctoral candidate in philosophy who was among the GAGE members who signed the April agreement, said that her calls had been well received.

“I wasn’t expecting a very good response. I was expecting people to be annoyed we were calling, or to just hang up or to not pick up,” she said. “A lot of people have been picking up and saying, ‘oh, yeah, I’m happy to make a plan to vote.’”

Charts listing graduate students’ names filled one wall and extended on to another. Colored stickers indicated how each student planned to vote, and “yes” stickers outnumbered the others, though many names still had only white paper next to them. Each caller had a part of the chart printed out on letter paper.

Josh Armstead, who is the union shop steward at Leo’s, said he was volunteering with GAGE as a statement of solidarity with graduate students. “We’re all organized labor, and we’re all people who are seeking better dignity, respect, pay increases at our jobs—regardless of whether we’re cafeteria workers, groundskeepers, or graduate students,” he said.

Armstead said that solidarity is especially important now, during a period of intense political strife.

“It’s important, especially in these times, that we show that we’re not isolated, that we are talking to each other, and that we are working together. Because that’s the only way we’re ever going to actually win.”

Randi Weingarten, president of the American Federation of Teachers (AFT), made an appearance at the phone bank. She noted that the four-day election overlaps with the nationwide midterm elections taking place on Nov. 6. She said that the two elections have substance in common as well.

“The labor movement, and having a collective voice, is very important to combat the evils that we see, the ugliness that we see right now,” she said. “It is really good to see that on this campus, the administration has said, ‘Yes, we will respect whatever the graduate workers want.’”

Weingarten said that Georgetown’s graduate student workers are unusual because their drive for unionization is both “economic and spiritual.” 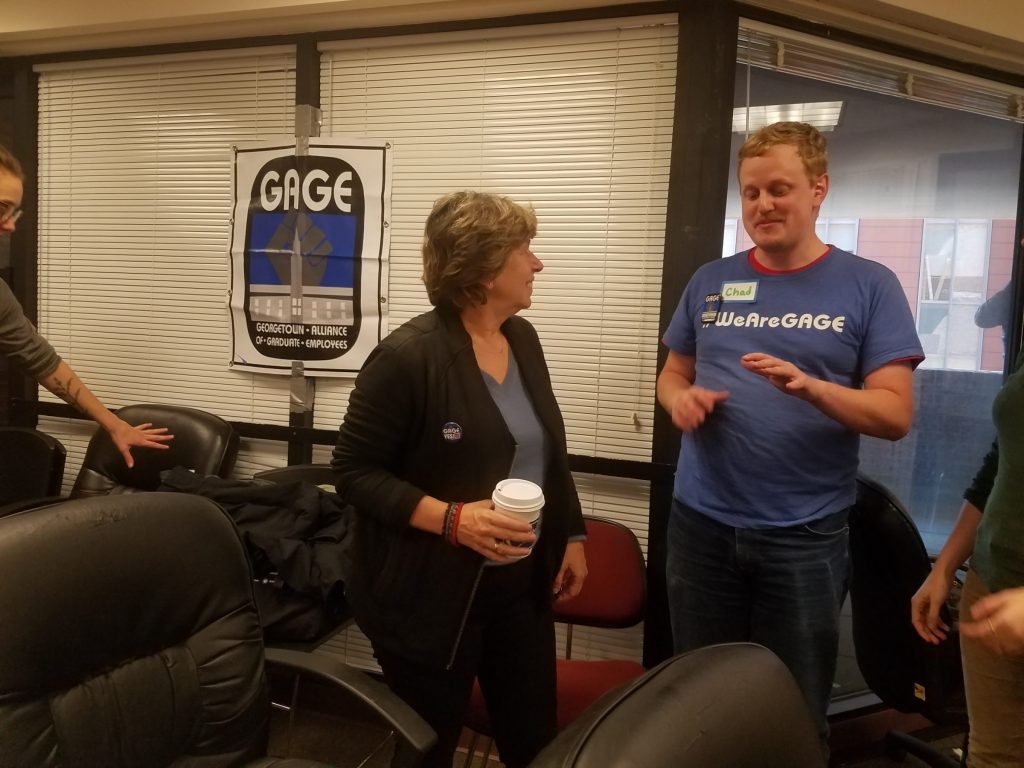 “People who come to Georgetown understand the narrative of this school and the deeply rooted Jesuit values that are here,” she said. “They want to ensure that those values are actually real, not rhetorical.” The AFT, she said, is a means of amplifying those students’ voices.

But Weingarten said that her organization was not the driving force behind the unionization effort. Instead, that force comes from the bottom up. At Georgetown, graduate students took action in 2016, when the Graduate School of Arts and Sciences announced that it would unilaterally change certain graduate students’ working conditions.

Graduate students at Harvard, Yale, Duke, the University of Michigan, the University of Chicago, and Boston College have also agitated for a union. Some of those movements have been successful, and Weingarten attributed a part of this national wave of on-campus unionization to those Georgetown students who took action in 2016.

“We go from individuals who want [a union] to GAGE to, now, a group of people—an avalanche of people—that want it for all the right reasons.”

The university initially pushed back against GAGE’s unionization effort, but the parties came to an agreement a few months later. In October, GAGE moved toward the election by officially announcing their intention to hold one, as required under the agreement.

In an Oct. 22 statement announcing the election, Georgetown administrators Robert Groves, university provost, and Edward Healton, executive dean of Georgetown Medical School, wrote in a statement that the university would work to improve graduate student workers’ conditions regardless of the election’s outcome.

“Georgetown will continue its efforts to improve conditions for graduate students if a union is not elected and will bargain in good faith if one is elected,” they wrote.

They also referenced the private nature of its agreement with GAGE. Because of the agreement, the result of the election will not be subject to the National Labor Relations Board, should it move to undo a previous board decision which allows graduate students of private universities to unionize.

Armstead’s concerns were more immediate. Instead, Armstead expressed his solidarity with the graduate students he was calling. 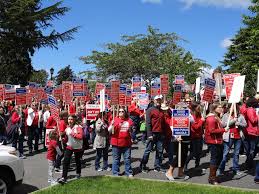