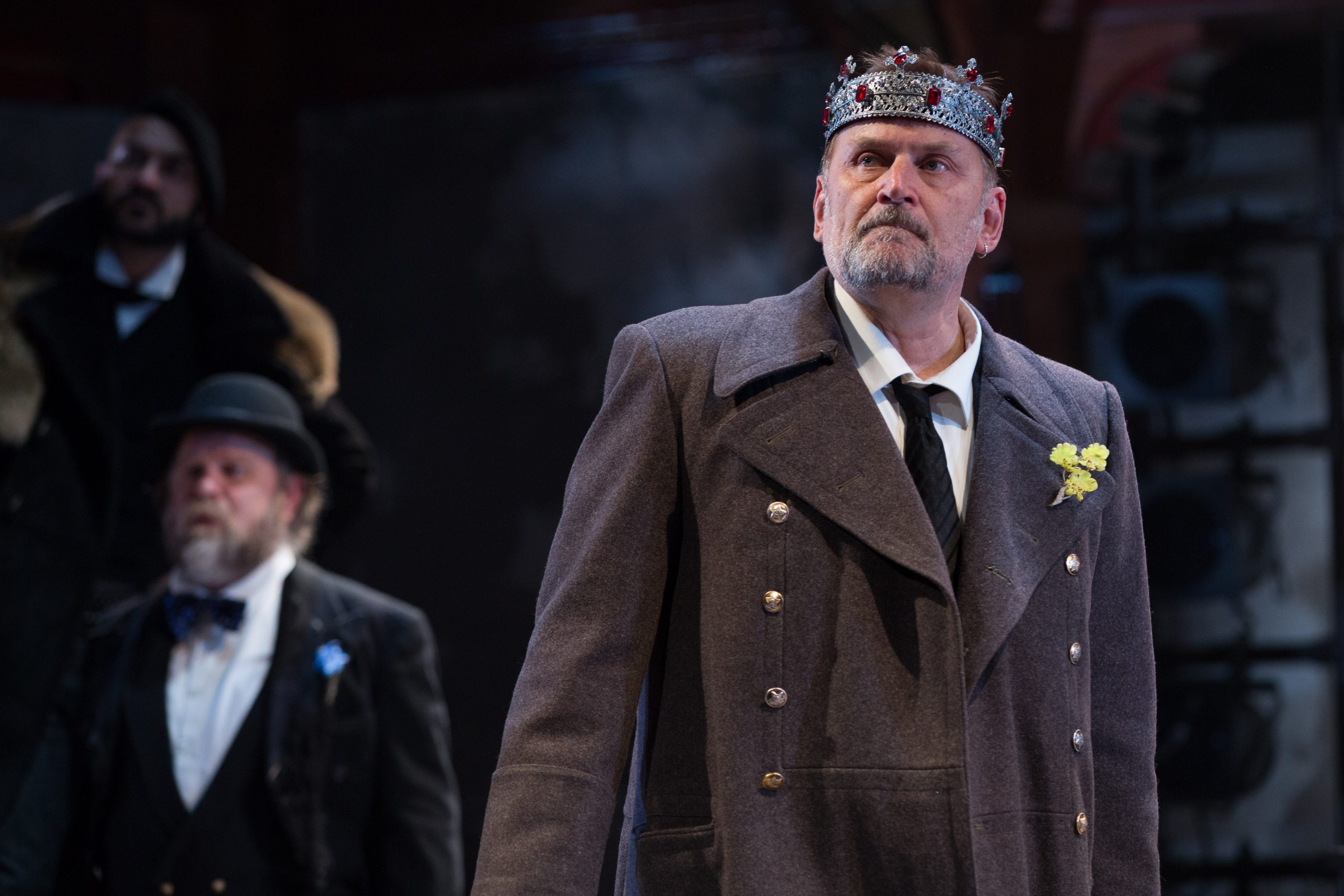 Shakespeare’s King John does not boast the popularity of A Midsummer’s Night Dream or Romeo and Juliet. It’s a play that few beyond circles of Shakespeare buffs have heard of, and fewer still have seen performed live. Folger Theater has set out to change that. Folger’s production of King John’s is running from now through Dec. 2, bringing the play back to life and into the modern day with its unique choice of costumes, simplistic set, and seasoned Shakespearean actors. Though the play’s complex plot is made digestible by the interpretations of the director and performers alike, the fatal political strife and human fragility for which Shakespeare plays are famous are kept center stage.

Director Aaron Posner’s interpretation of King John opens with an expository scene in which the players break the fourth wall to explain their roles in the play. King John (Brian Dykstra) is the current king of England, whose rule is being challenged by his nephew Arthur (Megan Graves). Though himself only a boy, Arthur’s claim to the throne is supported by a host of adults who often seem to want to see his destiny fulfilled more than Arthur himself, including his mother Constance (Holly Twyford), the French King Philip (Howard W. Overshown), and the Austrian King (Maboud Ebrahimzadeh). When Arthur and his supporters declare his right to the throne, King John goes on the defensive, bolstered by his own crew of supporters, including his mother (Kate Goehring) and faithful attendants, Philip Faulconbridge (Kate Eastwood Norris) and Hubert (Elan Zafir). As the story progresses, loyalties are shifted by marriage, the church, and death.

King John is similar to other Shakespeare plays in its focus on humanity amidst excessive political strife. Through the endless fighting, the characters call the viewers to notice their individually lived experiences within the greater story. King John, terrified of losing his power, experiences a Macbeth-esque descent into a frenzied hold on the crown as the plot progresses. John’s fear brings the character down to earth; the King is not just England’s ruler but a man, one who is deeply wounded at the prospect of returning to being simply that. A similarly revealing relationship exists with Constance and John’s mother, Queen Eleanor of Aquitaine. Both of the women are fiercely loyal to their sons, even at the peril of tearing apart the familial bond shared between them. Their relationship is hostile, but their separate motivations are love, a fact which contrasts sharply with the biting remarks that they aim so precisely at one another.

Folger’s simplistic set allows for King John to speak for itself. There are only two major pieces, both of which remain on the stage for the duration of the play. One is a large crown hanging from the ceiling. It is a looming reminder to the audience of what is at stake. To the characters it means very much, but to the audience members it means comparably little as characters begin to die for it, and as the strain of the fighting leads them to their own personal hells.

The second set piece, a large throne, plays a similar role. John occupies it most frequently, hardly ever leaving it and returning to it always speedily. More than the looming crown does, the throne represents John’s character and his need for its validation. The set, like the modern, black costumes of the players, allow for King John to be brought to life by its own script and by the performances of Folger’s talented actors.

Folger’s actors use their seemingly perfect understanding of the text to enunciate and pause their speech in ways which make the text understandable. Especially for such a complicated story, this approach to the script, versus one which favors a more monotone vocal performance, makes Shakespeare’s writing all the more impactful, as it is all the more understandable. Dykstra gives a particularly affecting performance as King John. His sympathy for his character’s plight is clear in his nervous movements nearer to the play’s conclusion, and John’s frenzied speeches in defense of his crown will more likely garner pity than vengeance from viewers for his more disagreeable actions. Zafir similarly well understands the plight of his character Hubert, playing him as well-meaning and gentle. The genuineness of Hubert is especially impactful in a later, dramatic scene between himself and Arthur, who has been put in his charge by John.

While watching Folger’s King John, one cannot help but wonder why it did not go down in theatrical history as one of Shakespeare’s great plays. The script is dense to be sure, but in the hands of Folger’s talented actors and crew members, it is made digestible. The comprehensibility of the plot allows for Shakespeare’s emphasis on humanity to shine through in emotionally affecting ways that would not have been possible in an environment less cognizant of the play’s buried themes. Folger is and has always been dedicated to bringing Shakespeare to the public, and with King John, they’ve proved themselves once more to be fantastic executors of that goal.