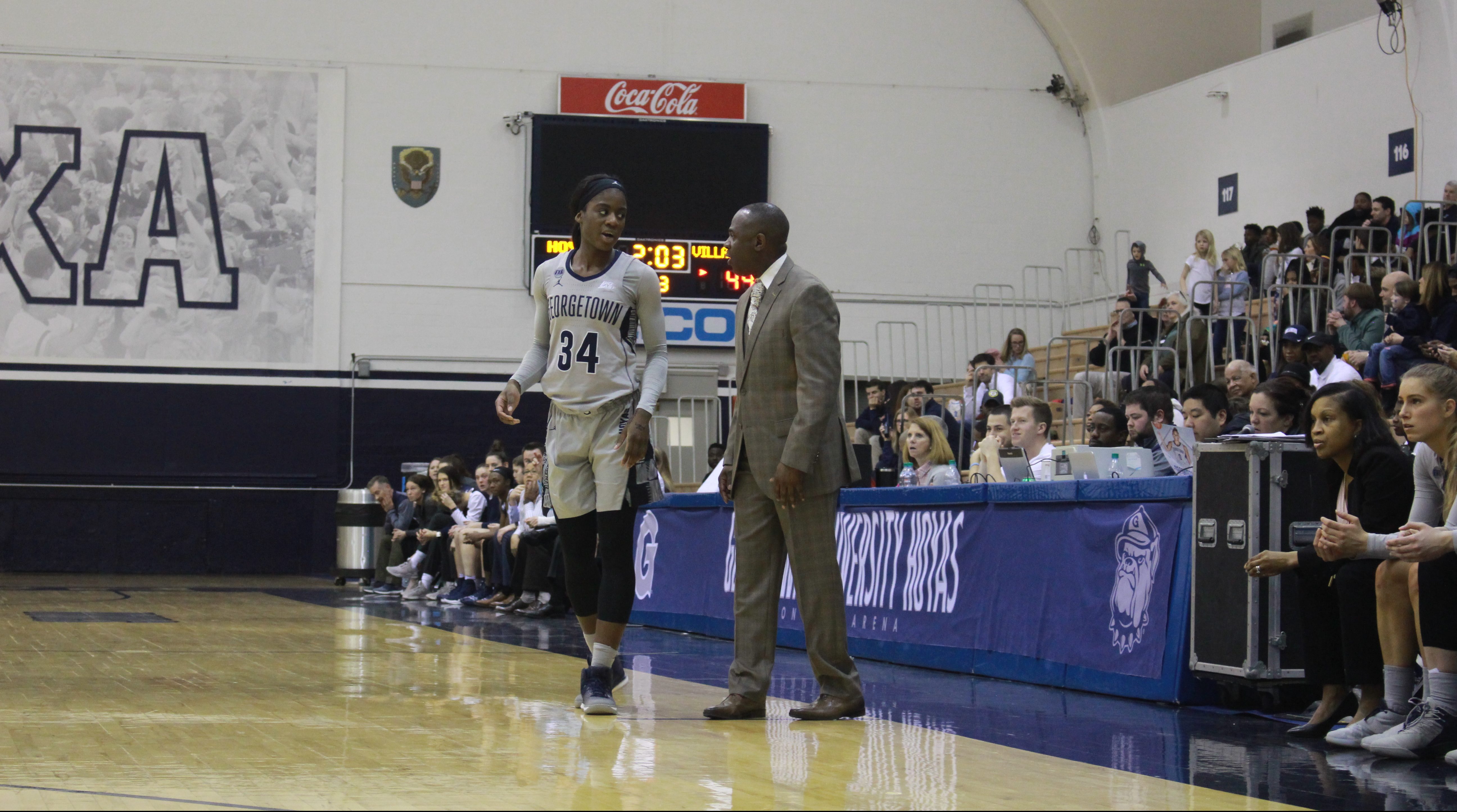 The Wildcats came roaring out of the gates, with Gedaka getting two quick buckets inside before a jumper from Tucker forced a timeout from Howard at 7:43 in the first quarter. Two threes from White and Adomako got the Hoyas back into the game for a moment at 8-6, but the visitors ripped off another 8-0 run culminated by a Jekot three to push their lead to 16-8. Senior guard Brianna Jones’ second jumper was followed by a drive and finish from Gedaka at the other end, but the Hoyas responded through Adomako, who was twice assisted by White to bring the game within three at the break.

In the second quarter, Jekot opened the scoring with another triple on the first possession, but the Hoyas went on a run of their own to take the lead for the first time. Adomako’s layup, free throw, and jumper meant she had scored the hosts’ last 10 at 22-20, but White aided the effort with a long two and then a successful and-one to push GU out in front, 25-22.

“I thought we had an advantage with [Adomako]. We try to run some sets for her, to try and get her looks going to the rim,” Howard said. “We try to play a little two-man game with her and Dionna, and that’s how we have to play, but they have to be willing to get other people involved if there’s a double.”

With the teams seemingly unwilling to trade baskets, ‘Nova scored six points in seconds when Jekot stole the Hoyas inbound pass after a Tucker three and found senior guard Adrianna Hahn behind the arc. Junior forward Anita Kelava responded with a face-up jumper to bring the Hoyas within one, but Hahn, who sits second all-time in program history in made threes, again connected from range. With the Hoyas down 35-31 at the under-five timeout, Howard drew up a play for freshman guard Cassandra Gordon, who played over 10 minutes in the first half despite averaging only 6.7 minutes per game on the season. Gordon hit the three before Adomako returned after a rest and beat her marker to the basket to give the Hoyas a one-point advantage at the half, 36-35.

Georgetown held an 8-0 advantage in both second chance and fast break points at halftime, and had allowed only one offensive rebound. The Wildcats’ 6-of-13 mark from deep meant they were with the Hoyas every step of the way, however, while Gedaka was 5-of-5 from the field. 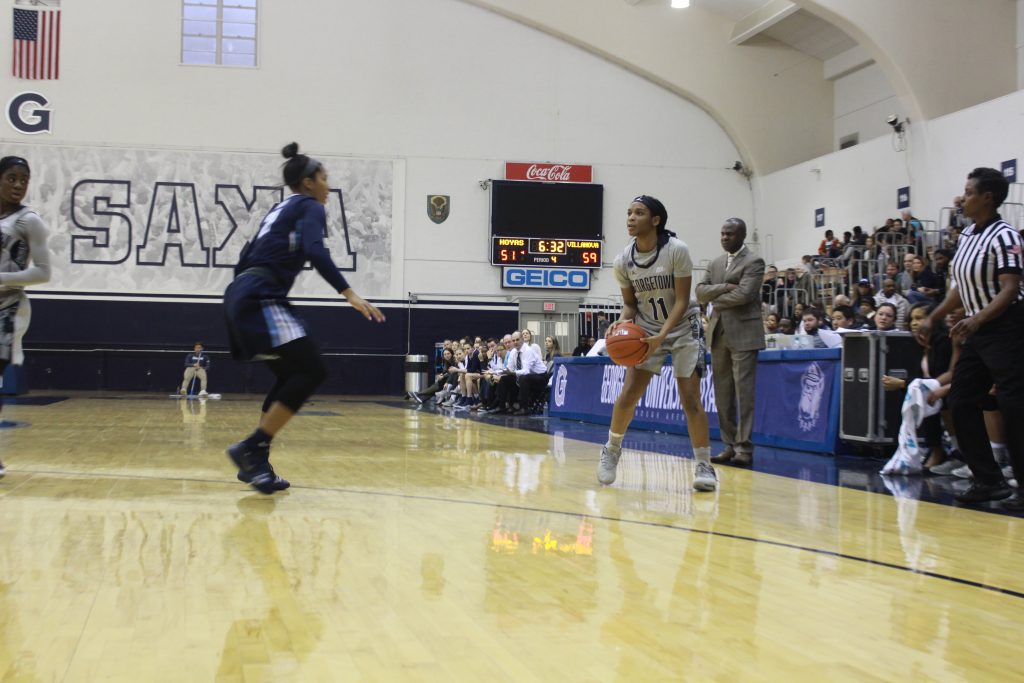 Adomako picked up right where she left off after intermission, hitting a layup after Gedaka’s fast break layup to restore the Georgetown advantage, 39-37. After White’s offensive foul sent her to the bench, Adomako connected again while being fouled to extend the lead. The Wildcats answered with a 9-1 run featuring baskets from Gedaka and Jekot down low. ‘Nova junior forward Bridget Hurlihy’s running layup as the buzzer sounded on the third quarter gave the Wildcats a 48-47 lead heading into the final frame.

The visitors really found their groove in the early goings of the fourth, with White’s jumper for the Hoyas sandwiched between two more threes from Hahn and another layup from Jekot as the Wildcats opened up their largest lead since the first quarter. Herlihy’s three was answered by a triple from White, but on the ensuing possession Villanova went down low to Gedaka again for a bucket. Adomako responded with a spin and layup, but then had the ball stolen from her as the Hoyas looked to make it a one-possession game. A Kelava block at the rim out of a Villanova timeout led to an elbow jumper from White, prompting another timeout from Wildcats head coach Harry Perretta. The Hoyas forced a tough shot from Jekot and then went to Adomako at the other end, who finished off the glass while being fouled and hit the free throw to make it a one-point game, 63-62, with just over two minutes remaining.

Jekot stepped out of bounds on their next possession,  and Adomako blew by her coverage yet again to give Georgetown their first lead of the fourth quarter. Hahn’s miss with just under a minute left was rebounded by Adomako, who twice couldn’t connect on jumpers, but White and Jones grabbed both rebounds, with Jones then getting sent to the line. She missed both free throws, however, to give Villanova a chance down one with 12.7 seconds left.

The Wildcats’ play was stymied, however, as Kelava deflected an attempted pass on the baseline which redirected off the ‘Nova player and out of bounds to return possession to the Hoyas. White was sent to the line and the career 78 percent free throw shooter hit both to extend the lead to three with 9.6 ticks remaining. The Hoyas inadvertently fouled, which turned fortuitous when the shooter could not connect on either shot. White skied for her sixth rebound of the game and again made both to seal the game, 68-63, and push Howard to the century mark.

“It’s been a long time coming, and it’s a blessing,” Howard said of the accomplishment. “‘I’m glad I got the 100th win the way we got it because it’s something to remember – how we came from double digits down, how we battled back, and how I got wet.”

The Hoyas’ next matchup comes on the road against St. John’s (8-9, 1-5 Big East) next Friday at Carnasecca Arena. Follow @GUVoiceSports on Twitter for coverage and coverage of all winter sports at Georgetown. 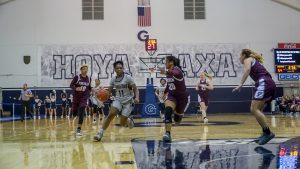 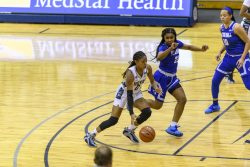 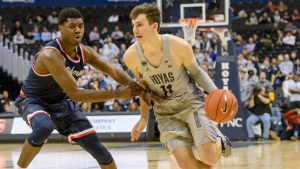