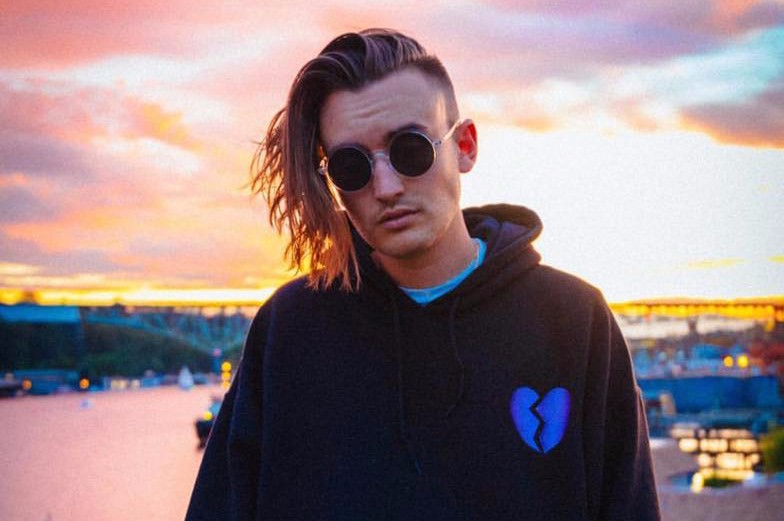 Singer, song-writer, and sad boy musician Garrett Nash, better known as gnash, is nothing if not gentle and kind in his attempt to create music that sparks conversation and makes listeners feel less alone. “Eventually, I want to make a song for every feeling, & I feel this 3-part, 21-song series was a great place to start,” writes gnash in his website biography, referencing the release of EPs U (2015), me (2015), and us (2016). His new, debut album we builds on this project with a series of internally conflicted songs, in which upbeat tunes play behind heartbroken words, and soft, nostalgic notes flow through happy lyrics. Despite the simple melodies that define gnash’s music and this album in particular, we is artistic, complex, and emotionally honest in its exploration of love.

Gnash’s music tends to err on the side of outright depressing, but his latest work takes a cheerful turn—at least in tune. The first half of the album is a head-boppin’ kind of catchy that is hard to reconcile with its sad lyrics of loss and self-doubt. Songs like “nobody’s home” and “insane” beg listeners to blast them in the car with the windows down despite words like “I’m all alone / Guess it’s just whiskey, weed, me, and my phone” and “I guess if your heart can break then your head can do the same.” Mixed feelings create a disconnect on every track that makes the listening experience not only refreshing but also intimate. The music says it’s fine when it’s not in the same way that people do.

Yet, the second half of we features songs that are the complete opposite. The vivacity that shines through the album slows towards the end, giving way to the lyrically happiest, yet darkest-sounding tracks. Gnash tears away from his break-up songs with “be,” which is about being in love here and now, no matter what happens in the future. He sings, “I don’t believe in being sad,” over a haunting acoustic harmony that is sure to break hearts. The blurring of lines between “happy,” “sad,” and every emotion in between gives each track a unique sentiment and speaks to gnash’s goal to write a song for every feeling.

We is also disconnected in the story it is trying to tell—if it is trying to tell one at all. It starts off about a break-up and comes to a close with love songs. But it does not feel like a random collection of tracks, especially because gnash includes some spoken poetry at the beginnings and ends of certain songs, including the opener and closer. In the first track, “happy never after,” he finishes with the line, “We’ll never be we,” whereas in the final track, “p.s.,” he closes the album with the words, “We’ll forever be.” Both lines are obvious references to the album title, but it’s hard to tell exactly who he references with the word “we.”

If gnash had not already released an EP called me, it might have been more appropriate to name this album me. Despite the lack of a coherent story, one theme is present in every word he sings: self-scrutiny. Although on the surface we is about gnash’s relationships with other people, it’s really about himself and the role that he plays within those personal relationships, whether it is nurturing or damaging. He blames himself for the end of a relationship in “imagine if,” explains how everyone in his life agrees that he is at fault in “insane,” and directly addresses his own self-loathing in “dear insecurity.” Released in August as one of the album’s singles, “dear insecurity” is an especially beautiful song that will resonate with audiences—especially at the end, when those singing along will be forced to say “I am proud of the person that I am.”

We also features the hit single “t-shirt,” a breakup track that takes on a more pop-punk sound than the rest of the album. The combination of acoustic verses and an electric chorus in tandem with gnash’s raw voice is edgy and emo in all the best ways. And it’s no coincidence. The music video pays tribute to 2000s alternative rock hits, featuring gnash dressed as All Time Low’s Alex Gaskarth in the music video for “Weightless,” Paramore’s Hayley Williams in “Misery Business,” and Panic! At The Disco’s Brendon Urie in “I Write Sins Not Tragedies.” He even dresses as a Black Parade-era Gerard Way, really taking it deep into the realms of punk rock. Through and through, the song is meant to be a rock headbanger, and it is a surprising success for an artist that is known for his stripped down acoustics.

Reflecting the name of gnash’s label, happysad, we is a happy and sad album. Gnash blurs the lines between emotions with music that sounds one way but speaks a different truth. These complexities make the album thoughtful while the vibrant acoustics, soft piano, catchy beats, and gnash’s distinct voice create a beautiful sound that is a dizzying mix of fun and haunting. There are no throw away tracks; every single one will leave its impression on listeners and spark conversation.

In the last track, gnash sings, “I planted you a garden where your flowers can grow.” And that’s what he’s done with this album. Just as the colorful flowers on the cover of we suggest, this album is a garden for listeners’ thoughts and feelings to grow.

The Weekly List: A Love Letter to The Hoya