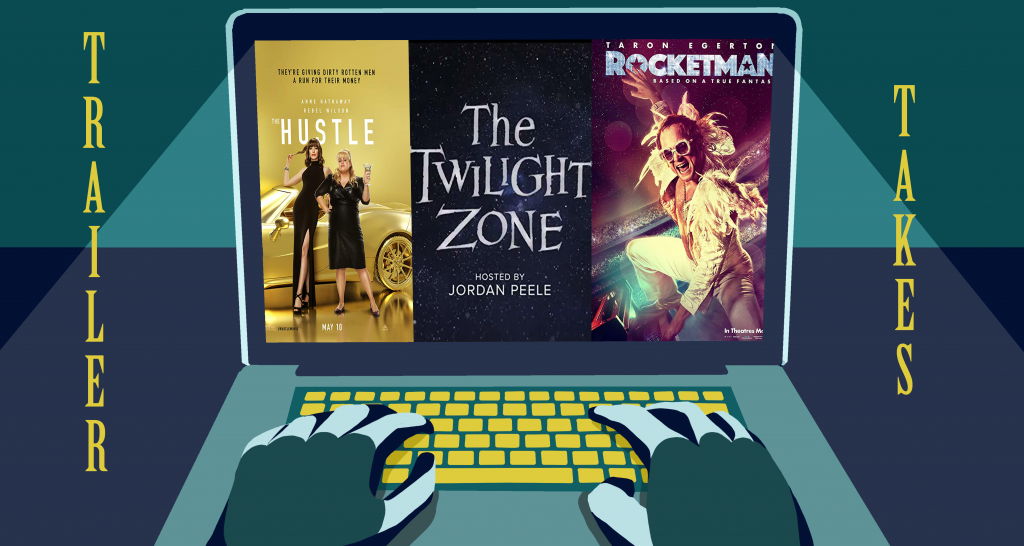 Trailer Takes: The Twilight Zone, The Hustle, and Rocketman

Katie: I must admit two things: a) I know nothing about the original The Twilight Zone series, and b) I have a complicated relationship with horror movies and psychological thrillers. This feels like it will be a complex mix of both. All in all, I am wholly confused by this trailer, but that could just be me. Other than my instant cringe after realizing the show’s genre, I think the cast is solid and the content is intriguing. Also, Jordan Peele has been contributing to and churning out projects seemingly by the dozen recently and they all seem to have a significant amount of success (i.e. Get Out (2017), BlacKkKlansman (2018), etc.). Consider me excited to see what he does with such a classic (apparently) TV show. Some questions I have is why is Peele the “host” of this TV show? Is he a narrator or a character? I am sure old Twilight Zoners (Zoners? Twilighters? Is this show too old to have a fandom name?) probably understand this reference. My favorite part of this trailer was being able to see everyone’s favorite former 18-year-old mayor Ben Wyatt (Adam Scott) from Parks and Recreation, back in action, although it looks like he took a wrong turn on his way home to Pawnee and is now not doing too hot. Cheering for you Ben. I doubt I’ll check this one out come April, but for fans of horror and thrillers it seems like a solid choice.

Juliana: Full disclosure: my only exposure to The Twilight Zone series is that one ride from Disney World in Orlando called Tower of Terror. To be completely honest, I don’t think I have recovered from it. My first reaction when the iconic song started playing was, “Turn it off, turn it off, turn it off right now!” Lingering fears from amusement parks aside, this looks pretty great. Some weird sci-fi gimmick regarding time being distorted? Hidden easter eggs from horror classics? Jordan Peele is directing this? I really don’t think I could say no to this one, even if I’ll have to bug my roommate to watch it with me. Catch me sleeping with the lights on when it hits in April.

Emma: Okay…wow. I had no idea what was happening, but I know a lot happened. I saw a couple of familiar faces—Adam Scott, Jordan Peele, Kumail Nanjiani, and Tracy Morgan—but only for a second. This trailer moved quickly, and all I got were snippets of moments. So many questions were racing through my mind, but the trailer was still intriguing. It made me feel unsettled, yet curious. Even though I have never watched The Twilight Zone, after watching this trailer I now want to know what it’s about, why it’s iconic, and more. For fans of the original, there’s sure to be conflicting emotions that all fans of shows with reboots go through. Will it live up to the hype? Does it hold its own against the original? Will it be good? Although I’m not a fan of horror/thriller shows (if I’m correct in assuming that’s what this is), anything with such a star-studded, talented cast as this one has is promising.

Katie: Anne Hathaway and Rebel Wilson are truly a match made in heaven. I feel like Anne doesn’t get the opportunity to fully display the full range of her  comedic skills in her previous cinematic masterpieces The Princess Diaries (2000) and its perhaps even better sequel, The Princess Diaries 2: Royal Engagement (2004), so I am excited to see more of her work in the genre. I am slightly put off by her “posh” British accent, which seems a bit forced to me, but she seems to fit the role well. Rebel Wilson is a solid comedic actress and this trailer displays her abilities—I must say the starting scene on the train was brilliant. This trailer shows a movie that is meant for good fun and perhaps empty but happy and carefree laughs. I’m not sure if I would actively go to see it unless I need some good mindless fun in my life, but hey sometimes you do!

Juliana: Look, I love Anne Hathaway. I love Rebel Wilson. Is it really a surprise that I’m going to love watching them be partners in crime? This film looks straight up my alley. The only bone that I have to pick with it is that I can’t justify half of these costume changes. For example, what situation could possibly justify Rebel Wilson wearing a Middle Ages peasant outfit? Are they going to a Renaissance fair? Actually, that does sound pretty brilliant, not gonna lie. To be completely honest, I’ll tolerate all of these weird costume changes if only for that trash camouflage joke because that made me rewind the video twice. I’ll take myself to the theatres to watch this one after finals for a couple of well-earned laughs.

Emma: I don’t know if this is just me, but this movie feels a lot like a miniature version of Ocean’s 8 (2018). I hope that this movie won’t just be a mock replica of that masterpiece and that it will differentiate itself. Rebel Wilson and Anne Hathaway are a new duo that I would not have expected together, but it works. Rebel’s wild antics, combined with her charismatic personality, never fail to add a laugh to any movie in which she has a role. Anne Hathaway’s British accent feels a little out of place, but perhaps it will be explained. It’s a minor issue compared to what a queen she is in any role she undertakes. The Hustle (2019) will have to satisfy our Anne Hathaway needs until Princess Diaries 3 comes out! (Sidenote: her outfits in the trailer are amazing.) The movie seems to be a perfectly light-hearted comedy that I know I’ll be eager to see.

Katie: Another biopic! Are we surprised? Absolutely not, but it kind of makes me sad that the legacies these films are supposed to be celebrating are getting lost amongst each other amid current Hollywood craze. Regardless of this, Taron Egerton looks fantastic as Elton John. The costumes stood out the most to me in this trailer, and although the singer himself is to thank for the inspiration, their recreation is spot on. Also any film with Richard Madden in it is automatically a win for me. The common mis-step with recent musical biopics like Bohemian Rhapsody (2018) is that although the legacy and the music of the artist are celebrated, the plot and depth of meaning in the artists’ story can be lost and feel a bit empty. Elton John is a huge character and icon to take on, and I can only hope that the film, as a whole, does him justice. I have a lot of faith in Egerton and, in a surprising turn of events, he is actually singing in this film, which is enough to convince me to definitely check it out!

Juliana: I’m having a small déjà vu sensation from last week’s Trailer Takes with Yesterday (2019). Did Bohemian Rhapsody really kick-start a new trend in Hollywood films? I’m really enjoying this, although I might actually lose it if suddenly Rami Malek starts cameoing as Freddie Mercury in these biopics, and we suddenly find ourselves stuck in some strange “20th-century rock/pop artists” cinematic universe. Random thoughts aside, Rocketman (2019) looks pretty exciting. The costumes are brilliant, the songs are great, and there’s certainly enough material to make it one heck of a film. I’ll definitely be watching it, if only because Taron Egerton is actually doing all of the singing in this movie and that’s…wow. Now that I think about it, considering the Oscar standards for this year’s Best Actor are “is in a biopic” and “can sing,” is it too early to nominate him for the Oscars 2020? Because I’m calling it.

Emma: To be frank, this film looks amazing. The costumes, the casting, and the music altogether indicate that the movie will be an enjoyable adventure. I don’t know much about Elton John’s personal life, so I hope the film will be a valuable glimpse into his story. Although it feels a bit like the “don’t make it obvious that you copied” meme with Bohemian Rhapsody (2018), the trailer draws me in just as much as that of the now-Oscar winning film. I’m not familiar with Taron Egerton, but he seems to be a good match for the role, especially because his singing wowed me. I was very pleased to see Richard Madden, whom I personally haven’t seen in a film since Cinderella (2015). All in all, the film seems exciting. Fingers crossed it lives up to its impressive trailer. One consolation is that the music of the trailer is iconic, so no matter how the movie turns out, at least you get some solid Elton John tunes.