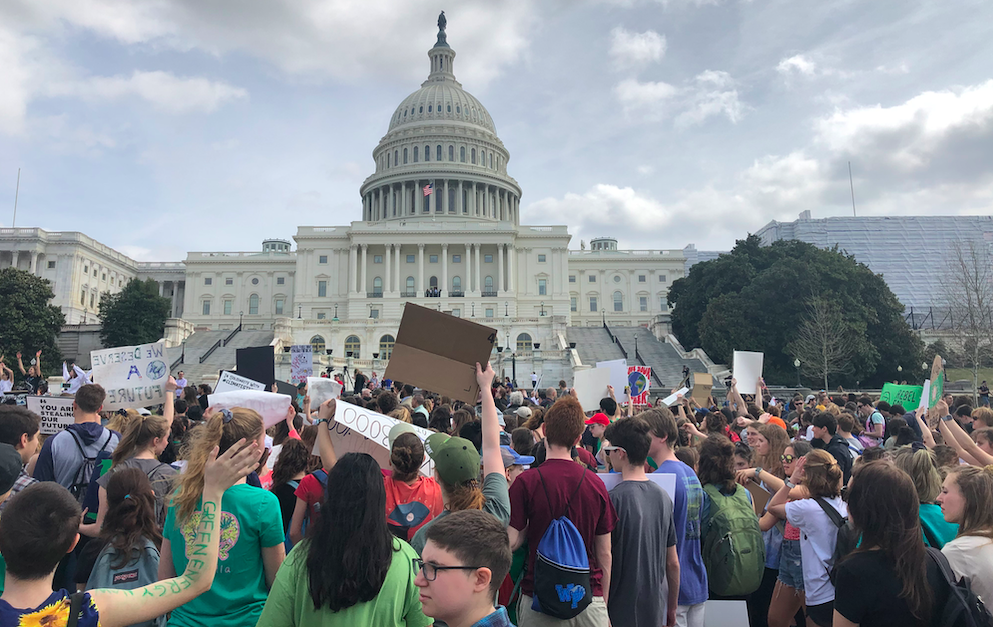 The lawn of the Capitol Building was crowded with approximately 1,000 protestors, including a dozen Georgetown students, protesting government inaction on climate change on Mar. 15.

Among the Georgetown students attending the protest were Madison Pravecek (SFS ’19) and Samantha Panchèvre (SFS ’19), who helped organize protesters from the university. Before joining the larger strike on Capitol Hill, Panchèvre and Pravecek hosted a poster-making session on campus and held a rally with others in front of the John Carroll statue.

Protestors chanted, “Hey hey, ho ho, fossil fuels have got to go!” and “No action, no future!” as they held up homemade signs with slogans such as “There’s no Planet B” and “100% renewable is 100% doable.”

Pravecek said she was inspired to raise awareness of the climate strike on campus by the young activists leading the charge for environmental justice.

Panchèvre echoed a similar sentiment, reflecting on the strength and resolve exhibited by the middle-school, high-school, and college students at the protest as they demanded accountability from those in power.

“I think it’s super important that young people make it known that we are aware how impacted our futures are going to be by climate change, and that we’re not shying away from the challenge,” Panchèvre said. “We’re willing to cut school and make a show about our futures being compromised, because adults are not acting fast enough.”

The protest was part of the Youth Climate Strike, which saw over 1.4 million participants worldwide, 2,000 organized walkouts, and rallies on all seven continents. The movement, dubbed #FridaysForFuture, was started by Greta Thunberg, a 16-year-old environmental activist and Nobel Peace Prize nominee who gained global recognition after she decided to walk out of her high school each Friday to protest in front of the Swedish parliament. Thunberg was also invited to attend the World Economic Forum in Davos, Switzerland, where she delivered a speech denouncing the climate inaction of policymakers and leaders.

Another Georgetown attendee, Saskia Rohde (COL ’21), expressed frustration that older lawmakers, who will not experience the full effects of global warming, seem to be ignoring young people’s call for immediate action.

“What’s really frustrating and confusing about climate change is that we have all of the tools at our disposal to solve it, but for some reason, we just won’t,” Rohde said.

Friday’s strike was specifically aimed at pressuring government officials to slash greenhouse gas emissions and implement policies like the Green New Deal to ensure global warming remains below 1.5 degrees Celsius. According to the United Nations Intergovernmental Panel on Climate Change, if significant action is not taken to address climate change by 2030, global warming will rise above that threshold, which would result in catastrophic and planet-altering damage.

Congresswoman Ilhan Omar (D-MN) gave a speech at the rally, in which she outlined two new bills she plans to introduce in Congress: one to end “corporate welfare” for the fossil fuel industry and the other mandating a “zero waste future” for the United States.

She went on to describe the failures of current environmental policies, stating, “It is unacceptable that we have communities like Flint that do not have access to safe and clean drinking water.”

As Omar concluded her speech, she referred to the lack of action by many of her colleagues. “You are not messing with politics, you are messing with lives,” Omar said.

Omar’s 16-year-old daughter, Isra Hirsi, took to the stage after her mother. One of three teenage co-directors of the U.S. Youth Climate Strike, Hirsi stressed the importance of taking an intersectional approach to educating about and fighting against climate change.

Asked if the youth climate strikes in D.C. and around the country would have a tangible impact on legislation, Rohde responded, “I definitely think that it’ll be a turning point for politicians within the U.S., maybe helping the Green New Deal, and inspiring action after the Trump Administration.”

Panchèvre ended on a similar note of optimism. “All of these young people are coming of age right now and getting educated, and change is coming, whether you like it or not.”