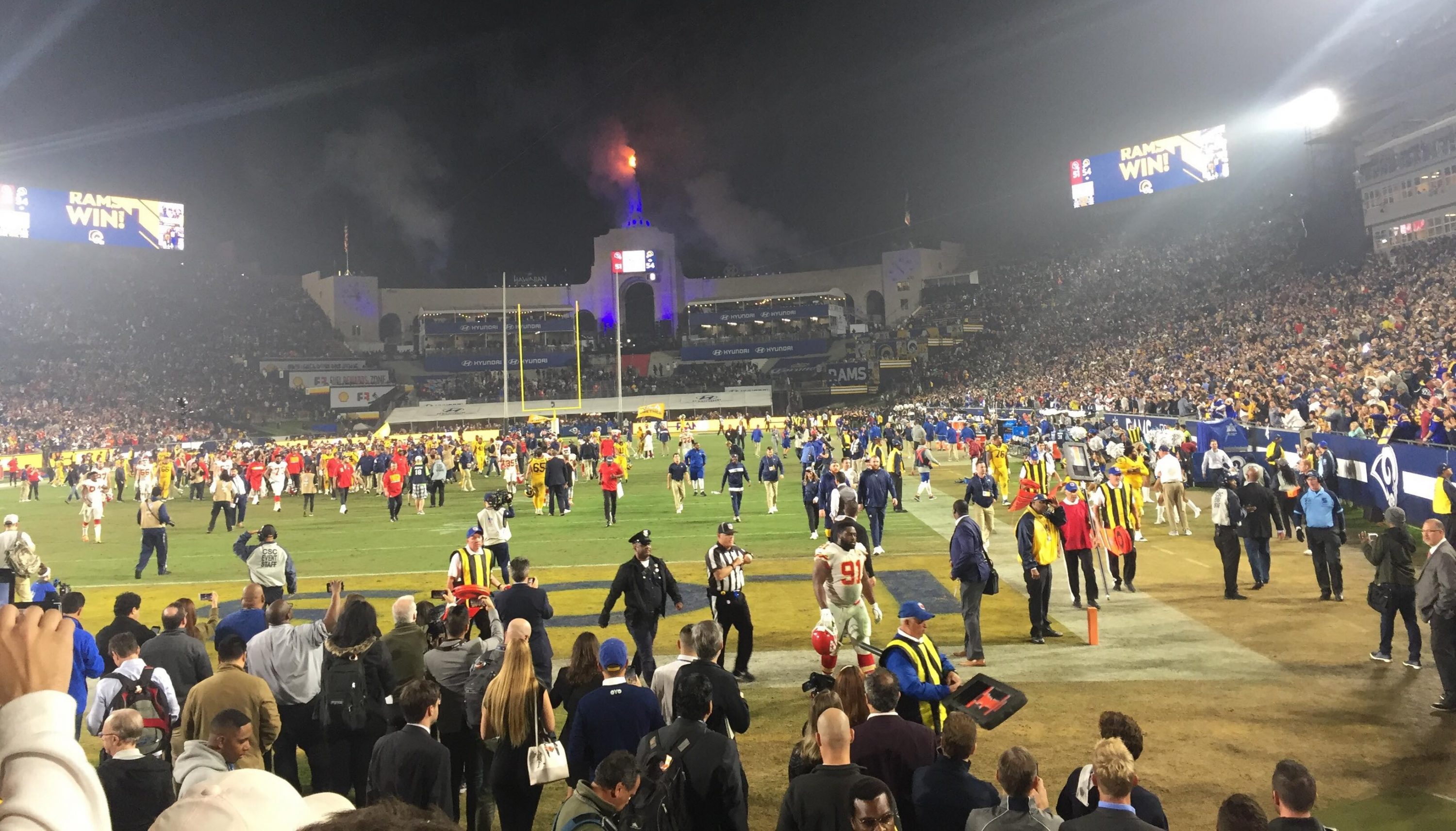 Welcome to Four Down Territory! This is a space where I’ll write about four things in professional sports every Saturday. Whether it’s the four greatest moments or the four worst blunders or anything in between, the only rule is that I’ll discuss four things. In my fourth installment, I’ll be outlining four of the greatest Monday Night Football games. I actually tried to highlight some of the best storylines that have played out on football’s premier primetime showcase. Hope you enjoy!

Oftentimes, people will try to find criticism after an event that has universally been deemed great. In this case, there were some complaints that the defenses didn’t show up and football is about all three aspects of the game. One, the defenses showed up. Two, who cares? For years now, Monday Night Football has gotten the short end of the stick scheduling-wise, and we knew this game would be a compelling draw. 9-1 Kansas City and 9-1 L.A. were clearly the best teams in the league, and we were set up for a track meet. What we got surpassed our wildest expectations. It was like a game of Madden NFL ‘04: knock-down, drag-out, take-the-lead, lose-the-lead football. Three of the fourteen touchdowns were defensive, and Samson Ebukam accounted for two of them by himself. Ten passing touchdowns, 891 combined passing yards, and 1001 total yards makes for a great game, maybe the best the regular season has seen. Seriously, the highlight video is 17 minutes long. The game was dramatic as well: L.A. pulled ahead twice and had leads of 13 and 10, but Kansas City fought back each time, eventually taking a 51-47 lead with 2:47 remaining in regulation. The Rams had one final touchdown drive left in them, taking less than a minute to score a touchdown and hang on for the 54-51 victory. Tyreek Hill and Travis Kelce’s combined 20 receptions, 342 yards, and 3 touchdowns were not enough to overcome 5 turnovers from Patrick Mahomes, and the Rams emerged victorious. In the end, the true winner was Monday Night Football. Games like this where top competition battled for sixty minutes were the reason why the NFL became an American institution. Putting it under the lights is a magical thing.

If you love everything that the old NFL was about, this was a game for you. An all-time classic pairing of Howard Cosell and Frank Gifford was on hand to call this exciting late-season matchup between two teams headed in different directions. The Miami Dolphins were a team in transition. After dominating the early 70s with two championships and a perfect 17-0 season, they continued to perform well under Don Shula but never to that level. They would be building to contend a few years down the road. On the other hand, the Houston Oilers were on the upswing. Led by Bum Phillips and his cowboy hat, the Oilers brought the love of football back into Houston with a bruising running game and a blitzing, swarming defense. This era in their history is called the “Luv Ya Blue” era, referencing their awesome blue jerseys. When they played teams in the Astrodome and the home fans were in a frenzy, they seemed nearly invincible. This version of the Oilers was centered around rookie phenom Earl Campbell. A big, bowling ball of a running back out of Texas, Campbell tore up the NFL in 1978, rushing for 1450 yards and 13 touchdowns in a sparkling rookie season. This game will always be remembered as his breakout moment: the point where America found out who Earl Campbell was. Miami and Houston traded haymakers in a seesaw battle, with no team opening up a lead of more than seven. Until the fourth quarter. Until Earl Campbell. With two minutes remaining in regulation, the Oilers led by five and simply needed to salt the game away. That wasn’t good enough for Earl. He took a toss pitch to the right side and sprinted down the sideline with blazing speed. The 81-yard touchdown put an exclamation point on a night to remember: 199 yards and four touchdowns. Campbell’s individual performance, Miami’s furious fight, the Oilers crowd, and the chemistry between Cosell and Gifford helped to make this one of the great games we’ve ever seen. This is why we love football.

When you think of the craziest, most hostile NFL fans, Oakland has to be at the top of the list. They play in a decrepit trashpile known as the Oakland-Alameda County Coliseum, which they have to share with the A’s. Their fans dress up in costume to every game and are absolute maniacs, probably because the Raiders lose all the time. But on this night, we didn’t see any of that. There was nothing but love and support for the visitors because something terrible had happened. The night before the game, Brett Favre’s father Irv passed away of a heart attack. Favre was only human, and it would be okay if he didn’t play in the game. But that’s not who he was. He was an iron man, and he’d played through all kinds of injury. This wasn’t going to stop him. Nevertheless, the Raider fans were as supportive as they could possibly be, pouring their hearts out for a man suffering the same way that so many others have. On a night where Favre was going through tremendous emotional duress, he produced the game of his life, completing over 70% of his balls for 399 yards and four touchdowns. Some of the throws he made were very Favre-esque: high in the air into double and triple coverage. But there had to be some kind of divine intervention: every one of those balls was caught. Packers receivers did whatever had to be done to pull the ball down. When all was said and done, Green Bay won the game 41-7, with the outcome never in doubt. Despite the fact that Oakland never had a chance, it was still a great game, because the story transcended the game itself.

My first two selections were incredibly compelling, back-and-forth affairs. My last two games are blowouts because the storyline is bigger than the game itself. This game is the story of a football team rising to the top, uplifting a city recovering from unspeakable tragedy. In 2005, New Orleans was devastated by Hurricane Katrina. It’s hard to even think of how many fathers and mothers, daughters and sons, friends and loved ones lost their lives, and even more were displaced from their homes. The New Orleans Saints were displaced from their home as well: the Louisiana Superdome was converted into a temporary shelter of last resort for people to take refuge and it suffered major structural damage. The Saints had to play most home games at the Alamodome in San Antonio or Tiger Stadium in Baton Rouge, and they were perfectly abysmal in 2005, finishing 3-13, “good” enough for the second pick. Changes had to be made, and their first moves were to hire new head coach Sean Payton and sign quarterback Drew Brees. With their selection of USC phenom Reggie Bush, there was a buzz around the team for the first time. The Superdome was set to reopen on September 25 for a week 3 matchup against Atlanta. New Orleans was still suffering, but 68,000 fans packed the Superdome to watch their beloved home team finally return. Saints fans are notoriously loud, but the stadium was never as emotional as it was on that night. The 1972 Dolphins wouldn’t have been able to beat the Saints that night. Nobody could’ve. New Orleans forced a three-and-out on the first drive, and the following punt is still one of the most iconic plays in the history of football. Steve Gleason reached out to block Michael Koenen’s punt, which Curtis DeLoatch recovered in the end zone for a touchdown. The Saints were back. The defense turned in a suffocating effort, conceding just three points on a night that New Orleans would never forget. It was the first part of a magical season where the Saints finished 10-6 and advanced to the NFC Championship Game. Four years later, they finished the job, winning Super Bowl XLIV. These new Saints represented a beacon of hope for a city recovering from natural disaster, and New Orleans is once again teeming with life as it always has been. This game represented the first step back onto that road. 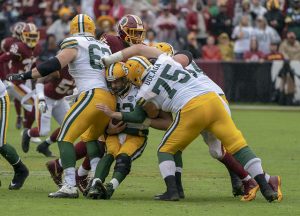