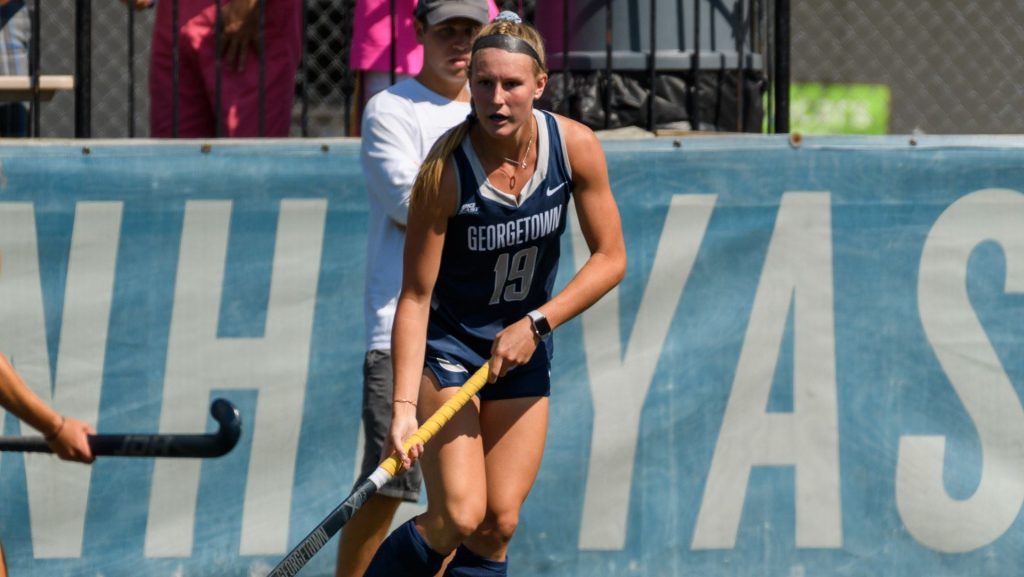 Field Hockey Splits Their First Away Trip Of The Season

The Georgetown field hockey team (2-2, Big East) started the weekend with a 2-1 win against Longwood (1-2, MAC) on Friday, rebounding from their first loss of the season, and finished it with a tough 3-2 loss to James Madison (2-2, CAA) on Sunday.

In their first away game of the season, the Hoyas struck first through senior midfielder Jordan Sweeney, her first goal of the season, despite four penalty corners from the Lancers in the first quarter. Sophomore goalie Ciara Weets kept LU off the board in the first half with a pair of big saves in the second quarter. The Hoyas took a 1-0 lead into the half and resisted constant pressure on goal until late in the third quarter when senior forward Olivia Wawrzyniak equalized off of her own rebound. With five minutes left in the game, however, junior midfielder Ali Cronin snuck the game-winning goal past senior goalkeeper Katie Wyman. GU had eleven fewer shots than Longwood, but their clinical finishing helped them hold on for their first away win of the season.

Two days later, GU traveled to JMU, who had lost on Friday 3-0 to No. 14 Ohio State (3-1, Big Ten). This was the sixth meeting between the Dukes and the Hoyas, however, the Dukes had a perfect record in the previous five games. James Madison came out strong and was a force to be reckoned with in the first quarter. Three minutes into the period, freshman forward Eveline Zwager found the back of the net, giving the Dukes a 1-0 lead. Senior forward Lindsay Getz helped the Hoyas rally back with her third goal of the season after drawing redshirt sophomore goalie Kylie LeBlanc to the left before dishing the ball into the net. The Hoyas continued into the second half with momentum as junior forward Cami Osbourne gave the Hoyas their first lead of the game. The tide turned in the closing stages of the game, though, as JMU scored two late goals through redshirt senior midfielder/forward Miranda Rigg and sophomore midfielder Courtney Lynch to win the game 3-2.

Next weekend, the Hoyas travel north to play Rider (1-1, NEC) and Lehigh (2-0, Patriot League) for another Friday/Sunday matchup pairing, before returning to the Hilltop for their first Big East game of the season against Villanova (1-1, Big East).

The games are set to begin at 4 PM and noon on Friday and Sunday, respectively. Live stats and a stream are available on guhoyas.com. Follow @GUVoiceSports on Twitter for coverage and continuing coverage of fall sports at Georgetown.

Steven_Kingkiner Steven is a die-hard Philly sports fan and a huge European soccer fan. He is currently a sophomore in the College.

The Weekly List: Explore the Cosmos
Have We Seen the End of the Cardi B v. Nicki Minaj Beef?