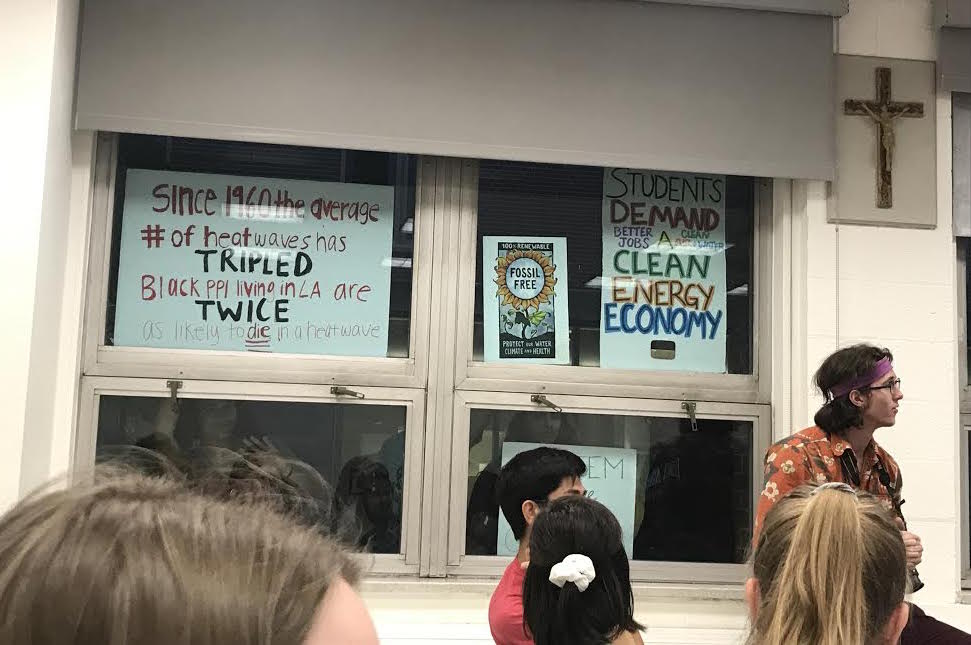 The Georgetown University College Republicans (GUCR) hosted a rebuttal to the Democratic presidential candidates’ Climate Change Forum, held at the university, on Thursday. The GUCR event highlighted several presenters, including Marc Morano, a climate change skeptic who published a book called “The Politically Incorrect Guide to Climate Change.” During the event, a group of students staged a sit in calling for climate justice.

The Climate Change Forum, a two-day, student-oriented discussion with Democratic presidential candidates on climate change, is being hosted by the Georgetown Institute of Politics and Public Service at the McCourt School of Public Policy with MSNBC, Our Daily Planet, and New York Magazine. The first day of the forum featured seven Democratic presidential primary candidates. In total, 12 candidates will participate in the forum.

The GUCR event aimed to give voice to conservative viewpoints on climate change. Along with Morano, speakers included Caleb Rossiter and Patrick Michaels from the CO2 Coalition, Paul Driessen from the Committee for a Constructive Tomorrow, and Kenny Stein, from the Institute for Energy Research. On a Facebook page advertising the event, the club wrote that they were “bringing five climate policy &[sic] climate science experts to provide an alternative perspective.” In the introduction to the event, GUCR board members stated that they did not necessarily agree or disagree with the beliefs of any of the presenters.

After Morano, the first speaker, was introduced, protester Olivia Torbert (SFS ’20) immediately stood up and offered an alternate introduction, emphasizing Morano’s association with the fossil fuel industry and his past disparaging remarks about climate scientists.

The protestors played music and alarms, held up signs in the windows from outside, and chanted throughout the event. One of these protestors, sporting a clown costume, interrupted Morano’s presentation by blowing an air horn.

During Morano’s presentation, he was questioned by those participating in the sit in, including Alexis Jade Ferguson (SFS ’22), who asked about the impact climate change has on minority communities. Morano responded that these communities would actually be harmed by policies implemented in response to climate change.

As tensions rose, GUPD arrived at the event. Two officers came inside and asked those who had been disrupting the event, including Ferguson and the protester dressed as a clown, to step outside. They refused to leave the room, prompting the GUPD officer to say he would only ask so many times. When asked to present their GoCards, the students did not comply.

Though the protesters were causing a disruption, they did not feel this justified the police asking them to leave. “I think we are exercising our right to free speech. I especially think this because here, the rhetoric they are putting out lacks any facts, and the rhetoric we are putting out is factual,” Torbert said. “In order to have the first amendment, we have to recognize facts. Otherwise the first amendment completely breaks down.”

GUPD then asked all attendees to exit the event for around ten minutes. Afterward, they announced that the event would resume, that those who returned had to follow the Student Code of Conduct, and that they would be threatened with a violation of the code if they did not comply with the officers. Some students were permitted to bring signs into the room but were cautioned that vocal protests would lead to removal. One student, who verbally protested after the warning, was escorted out of the venue by a GUPD officer. After leaving the event, protesters continued chants for climate justice from outside.

Those student protesters interviewed claimed not to represent any specific clubs at Thursday night’s protests.

Torbert, who appeared to be one of the leaders of the protests, said the group would not accept the hosting of these speakers on campus. “We want productive conversations,” she said. “The main goal of this protest is to tell Georgetown, tell the greater community that we don’t accept lies. Especially lies that disproportionately hurt marginalized communities.”

Aditya Saboo (SFS ’23), a member of GUCR, said he felt the protesters could have left after making their point rather than derailing the event. “I think everybody should protest, just to an extent which is reasonable,” Saboo said.

Alexandra Mucher (COL ’22), another leader of the protest, said she thought the inclusion of students of color was important to the protest. “At the forefront of environmentalism should be the people who are impacted by it the most,” she said. “I think we made the right decision tonight in deciding to make ourselves be heard.”

Saboo offered a different view, saying that the issue was not handled correctly. “I just think it’s not the morally and sort of right thing to do in a way,” he said. “I feel a lot of people’s time was being wasted for an event that was going to take place no matter what.”

Still, Ferguson felt that what the group had done was important. “Thinking in terms of climate change and how it has been affecting our world as a whole, I think that we should be done being complacent, done being indifferent, and we should actually you know seek resolutions to this widespread epidemic that has been occurring for hundreds of years,” she said.

Saw video of the event. The protestor dressed as a clown was the only one dressed appropriately. And all of the protestors did indeed act like clowns. Very sad.

As a SFS graduate in 1973 I am saddened about the intolerance the left has for free speech.. why can’t someone who holds a position opposite yours be allowed to express themselves? The only reason I can think of is that the belief in the hysteria about climate change has become a religion. Blind trust in their position and a rejection of any opposition, rational or not.

Sad to see people actually support climate change deniers claiming their right to free speech. Technically correct but their still dumbasses who won’t face the hard truth. Good for the protestors here. Shame on anyone who denies the facts and supports, either directly or indirectly, the destruction of our own home.

[…] Cuccia and Sarah Watson of the Georgetown Voice have more […]