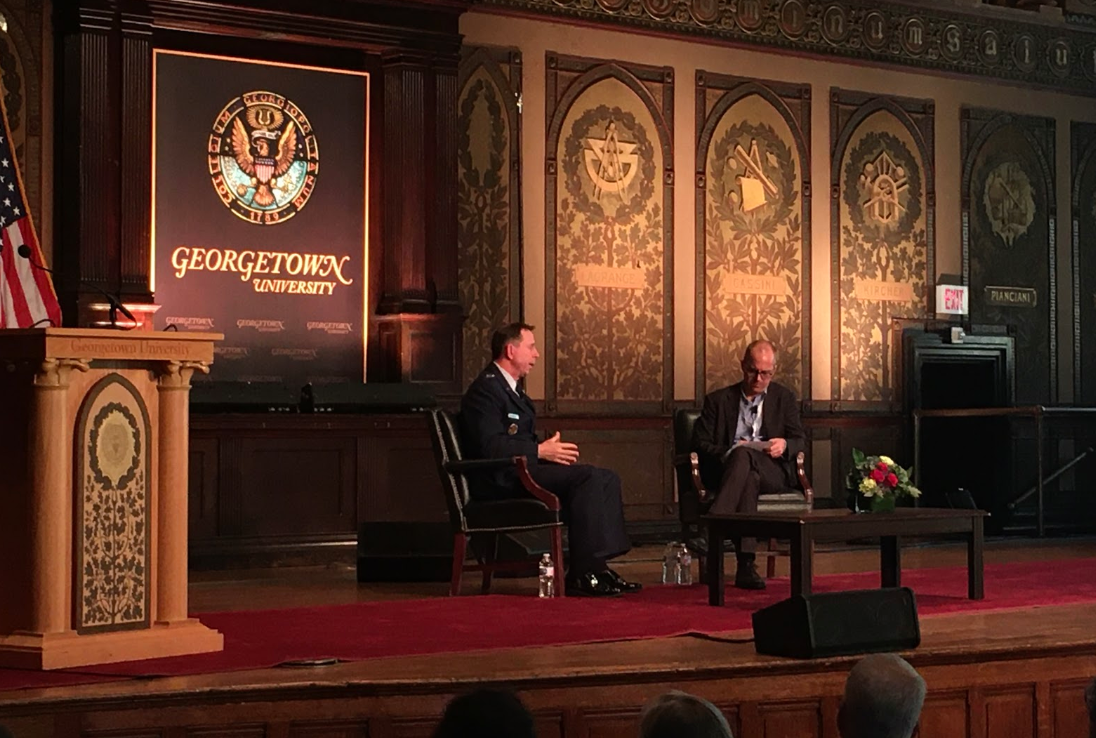 Georgetown hosted the Kalaris Intelligence Conference on Sept. 25 in Gaston Hall. The event brought together experts from the government, academia, and the private sector to discuss the risks and opportunities that artificial intelligence (AI) brings to the government and society at large.

The conference was hosted by Georgetown’s Center for Security Studies (CSS) and Center for Security and Emerging Technology (CSET), a new research center housed within the SFS that advises policymakers at the intersection of AI and national security. In previous years, CSS has paired with a federal intelligence agency to host the conference, but this year, it partnered with the nascent CSET.

Broadly speaking, AI describes the use of computers to perform tasks normally requiring human intelligence. Common examples of AI include image-recognition algorithms and the algorithms that entertainment companies use to provide users with personalized recommendations of content they might like.

In one of the conference’s keynotes, Sue Gordon, former Principal Deputy Director of National Intelligence, explained how AI has already expanded the capacities of U.S. intelligence agencies to recognize known targets in extensive collections of data. She specifically mentioned the ability of AI to recognize one person’s voice in a swath of recorded audio or to spot a known object in a compilation of satellite images.

Gordon emphasized the importance of privacy as AI continues to develop. “We have to harness the ever-increasing information the world possesses in ways that are respectful of privacy and civil liberties,” she said. “My analogy to this is how much better we are when we build a green building than when we try to make a building green.”

Gen. Jack Shanahan also delivered a keynote to the conference. He heads the Joint Artificial Intelligence Center, which uses AI to solve targeted issues within the Department of Defense.

In his talk, he contrasted the U.S.’ ethical approach to rapidly developing technologies with that of other countries.

“Everything we do is very open and transparent. We talk about ethics, not just on the research side,” Shanahan said. “I do not see that same approach from Russia and China.”

To advance AI capabilities in the U.S. government, speakers recommended partnerships with both the private sector and academia.

“The U.S. government is not the leader in this technology and it’s not to ever be. And so what we have to do is become fast followers,” said Gordon. “We do, however, have to invest in the gaps in AI that the private sector isn’t looking at.”

Shanahan explained how institutions such as CSET could fill these gaps left by the private sector. Addressing Jason Matheny, the director of CSET, Shanahan said, “I’m putting a lot of weight on your shoulders, Jason, because I think you can come with some recommendations for the entire society.”

Above all, Shanahan stressed the urgency surrounding AI’s ethical questions, which he said will continue to appear within government and beyond.

“I see every day new examples of companies and institutions figuring out new ways to use AI,” Shanahan said. “It’s really our entire society. Do we embrace AI as our future with all its implications, good and potentially bad?”