Georgetown filed an amicus brief with the U.S. Supreme Court (SCOTUS) on Oct. 4, petitioning the Court to support the Deferred Action for Childhood Arrivals (DACA) program. Filed along with 18 other universities, including Brown, Harvard, and Yale, the brief asks that the Court uphold previous decisions by lower courts denying the Trump administration’s efforts to eliminate the program.

DACA allows undocumented immigrants who entered the U.S. under the age of 16 before July 2007 to attend school and to work in the country without fear of deportation. In September 2017, President Donald Trump ordered an end to the program, arguing that former President Barack Obama lacked the proper authority to begin the program in 2012. Since his initial effort to rescind DACA, Trump and his administration have been embroiled in a legal battle to end the program.

Arisaid Gonzalez Porras (COL ’21), a DACA recipient and president of Hoyas For Immigrant Rights (HFIR), said in an email to the Voice that ending DACA would put the more than 700,000 people affected by the program at risk. They would lose authorization to work and attend school, and would have no protection from deportation. For Gonzalez Porras, the biggest concern would be the fact that the government has her information as an undocumented person living in the United States.

“I see it as being a red dot on their radar and if the program ends, what stops them from starting deportations?” she wrote.

The brief argues that DACA recipients have earned their place at elite institutions. “The DACA students at amici institutions were selected  because they are outstanding  students,” the brief reads. “Like their classmates, these young people were valedictorians,  student government leaders, varsity athletes, inventors, academic award winners, accomplished artists, and role models for younger children in their communities.”

The brief outlines the case of several students at the undergraduate and graduate levels, including three Georgetown students and argues that these students should keep DACA’s protections. Anahi Figueroa-Flores (COL ’21) is one of the students referenced in the brief, which outlines her high school accomplishments and desire to pursue a career in software engineering and advocacy. In an email to the Voice, Figueroa-Flores said that she agreed to be mentioned in the brief because she wants to help with the fight to protect DACA, and that she wants to see a permanent solution for all undocumented immigrants.

“I want undocumented students to be able to pursue their dreams and passions,” she wrote. “I hope that when SCOTUS is reading the brief, I hope they realize that we are more than our achievements—that we are human beings with families, siblings, passions, and dreams.”

Associate Vice President for Federal Relations Katy Button said that Georgetown will continue to fight for undocumented students. “Georgetown has been and always will be deeply committed to advocating for Dreamers,” Button wrote in an email to the Voice. “We hope Congress will pursue legislative solutions that protect undocumented students.”

Gonzalez Porras, however, worries about who is included in social definitions of the term “Dreamer.”

“DREAMER was a term that branched from the word Dream Act, but it was also used to only include high achieving folks, valedictorians of their high school, students that attend elite institutions, and that give back to the economy,” Gonzalez Porras wrote. “What this does is create the good v. bad immigrant narrative forcing the community itself to divide and decide who is worthy of the U.S.”

On a national level, Gonzalez Porras hopes to see a permanent path to citizenship for not just those who qualify for DACA, but other immigrants as well. “Undocumented people are humans. They deserve to be treated as such.”

The brief looked ahead to the future of immigration while also calling back America’s origins. “Ending the DACA program also would send a clear message to the more than one million undocumented children  in the United States that the trails amici’s students  and alumni have  blazed lead nowhere  and are not worth following,” the brief reads. “That message is antithetical to the commitment to equal opportunity on which this country was founded.” 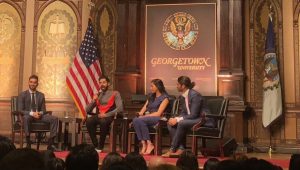