No. 7 Men’s Soccer Defeats No. 4 St. John’s 3-0, Announcing Themselves as College Cup Contenders 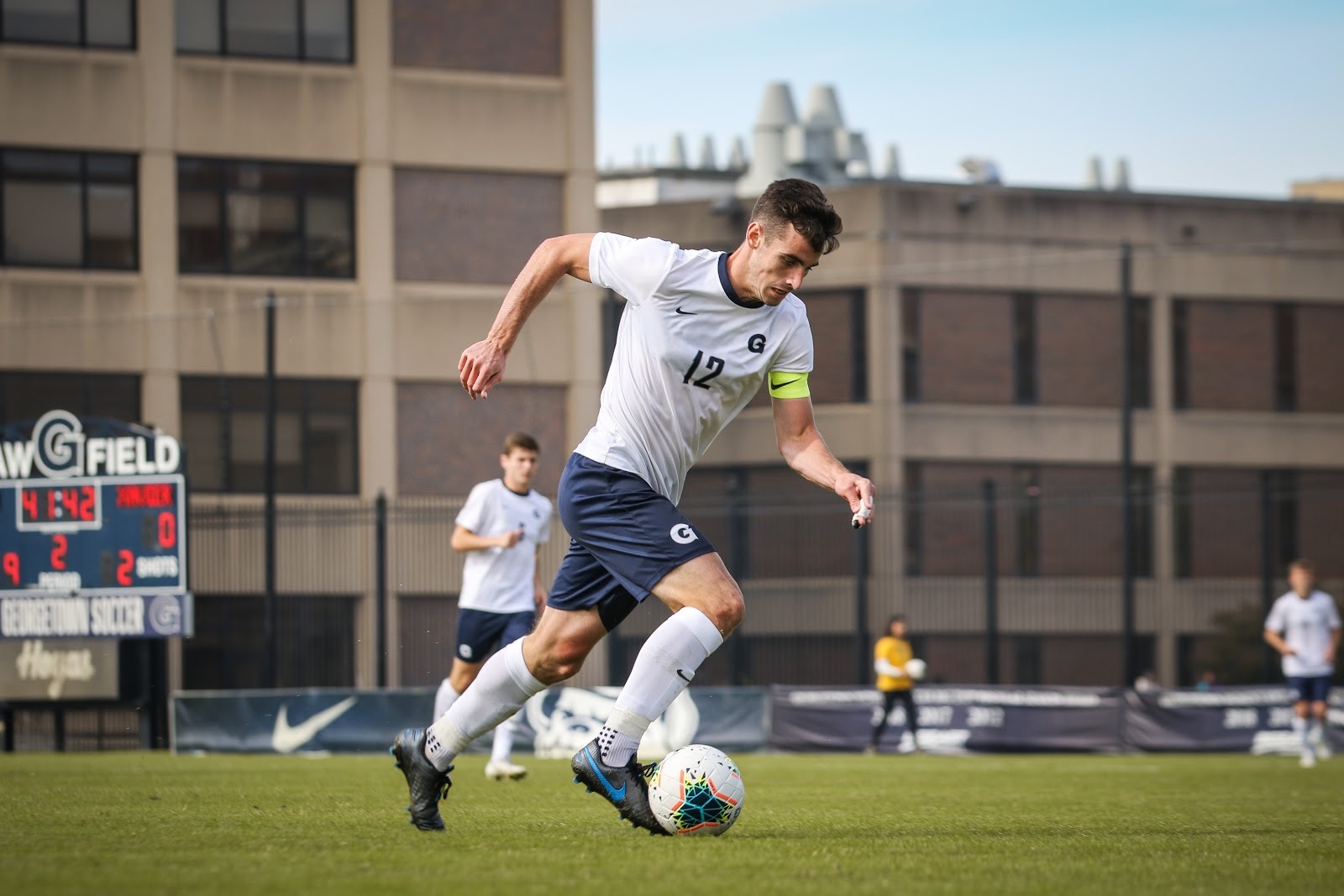 No. 7 Georgetown men’s soccer was electric on the road Wednesday night, putting three past No. 4 St. John’s in a commanding performance that reasserted the Hoyas as the kings of the Big East. Junior midfielder Jacob Montes started the scoring early with a sensational free-kick that was quickly followed up by a goal from senior defender Dylan Nealis. In the second half, junior striker Derek Dodson notched the third and secured the victory for the Hoyas.  Georgetown’s quick tempo proved too much for St. John’s who, after going down two goals early, never recovered.

Despite their dominance, Georgetown didn’t get their first dangerous chance until the 20th minute when Nealis beat his defender and put himself in a fantastic position to score, but St. John’s junior goalkeeper Jan Hoffelner cut down the angle quickly and smothered the attack.

A minute later, Achara dribbled straight down the Red Storm’s throat, performed a “Ronaldo chop” and drove a low shot that conveniently fell straight to Dodson as he streaked towards the net. Dodson touched the ball around the keeper and finished it in the back of the net, but the goal was called back for offsides.

The breakthrough eventually came in the 23rd minute, when Montes whipped a blistering free-kick into the top right corner for his seventh goal of the season.

Less than 60 seconds later, Nealis played a quick one-two pass with Dodson, and this time, the captain finished the job to give the Hoyas a 2-0 lead.

The Blue and Gray continued to pour the pressure on and, in the 36th-minute, junior midfielder Jack Beer nearly made it three off a turnover.

What was especially striking in the first half was the Hoyas’ pace. It looked like they were playing at an entirely different speed. Senior forward Achara put a lot of pressure on the St. John’s backline, and although he didn’t score, he had an outsized influence on the game.

The second half wasn’t as one-sided. St. John’s began to gain more possession and fire more shots at goal, but none of their chances ever posed a real threat.

In the 52nd minute, Hoffelner made a fantastic save off a point-blank shot from Achara, but the rebound fell favorably to Dodson who easily tapped it in from a few yards out.

Georgetown’s freshman goalkeeper Tomas Romero made an acrobatic save of his own in the 82nd minute when St. John’s Brandon Duarte directed a powerful header towards the top right corner, but Romero was equal to it and parried away.

The rest of the match was fairly uneventful. With a 3-0 lead, Georgetown allowed St. John’s to have more of the ball, and would counterattack whenever the Red Storm lost it.

Last night’s win sent a statement to the NCAA selection committee and the rest of the teams in the nation that Georgetown is a leading contender for the College Cup.

On a more somber note, junior center back Rio Hope-Gund had to exit the match in the second half after injuring his right foot. Hope-Gund has been a rock in the back, starting all 14 games and leading a Hoya defense that has only allowed five goals all season. Currently, the status of Hope-Gund’s injury is unknown going into Saturday’s matchup against Marquette (7-6-1, 3-3-0 Big East).

The last time Georgetown and Marquette matched up was for the Big East Championship a year ago, when Georgetown won 2-0. Historically Georgetown has thirteen wins, three ties and one loss against Marquette. Saturday’s game is set for 1:00 p.m. ET. Live stats and a stream are available at guhoyas.com. Follow @GUVoiceSports on Twitter for updates and game recaps throughout the women’s soccer season, as well as coverage of the rest of the school sports throughout the year.