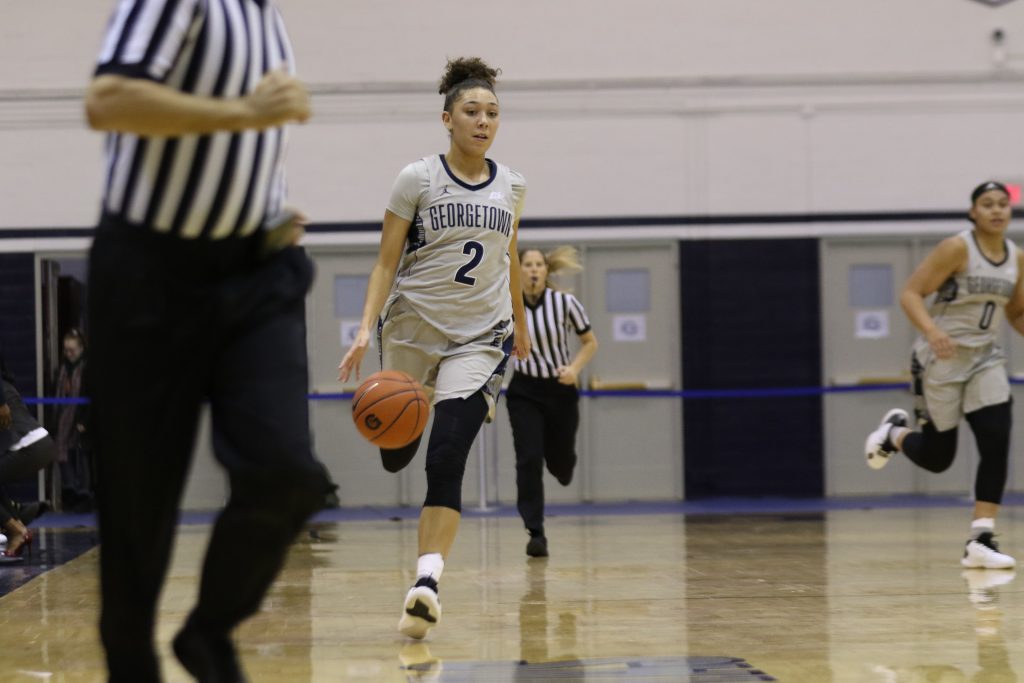 The Georgetown women’s basketball team closed out their non-conference schedule with a much-needed win against the University of Maryland Eastern Shore on Saturday. While the Hoyas brought their signature defensive edge, the Hawks’ poor shooting ultimately gave Georgetown its decisive 57-39 victory. Graduate guard Taylor Barnes scored a game-high 16 points for the Hoyas, while sophomore guard Brooklyn Bailey led UMES with 10 points.

The Hoyas  (3-8, Big East) got off to an early lead with a layup from freshman forward Graceann Bennett and a 3-pointer from Barnes. However, junior guard Amanda Carney answered with a three of her own to finally put the Hawks on the board two minutes in. This kicked off an 11-1 run, featuring a dominant seven point performance by junior guard Kenetria Redfern, which would give UMES (3-9, MEAC) its first and only lead of the game.

Graduate guard Brianna Jones managed to stop the bleeding with a jumper to bring the score to 11-8. This started the Hoyas on their own 18-1 run, from which the Hawks would never recover. Almost immediately following Jones’ shot, senior guard Marvellous Osagie-Erese stole the ball from Bailey and passed it to Barnes for a layup. Another jumper from Barnes resulted in a UMES timeout, but even this could not stop the Hoyas’ momentum, as sophomore guard Nikola Kovacikova sunk a three on the Hoyas’ first post-timeout possession.

Then, excluding a free throw from Carney following a foul on sophomore guard Tayanna Jones to make the score 15-12, neither team scored for the next five minutes, from the end of the first quarter into the first two minutes of the second. Even though both teams had ample attempts following a total of nine turnovers, neither could convert until Barnes broke the scoring drought with a three. Two minutes later, Osagie-Erese converted her steal to put the Hoyas up 21-12 with a jumper. Poor shooting continued to plague the Hawks, however, and the team did not score from the field throughout the entirety of the second quarter, instead relying on two pairs of free throws from junior guard Porsha Sydnor to answer layups from Bennett and senior forward Anita Kelava. Bennett’s own pair of free throws at the end of the quarter cemented the Hoyas’ lead at 28-17 at the half.

The action picked up in the third quarter, as Barnes and Osagie-Erese both scored from beyond the arc. Bailey also sunk a three, making this the Hawks’ first field goal in almost 17 minutes. After two layups from junior forward Tatiana Thompson, Bailey and Barnes traded threes to put the Hoyas up 41-25. Despite a layup from senior guard Dayona Godwin, Kelava’s jumper in the final seconds of the quarter kept the Blue & Gray’s lead near 20.

The Hoyas started the quarter hot once again with threes from Tayanna Jones and sophomore guard Cassandra Gordon. Bailey then scored a layup, but was met with freshman guard Olivia Snyder’s first block of the season upon her return to the basket. Free throws would determine the last few minutes of the fourth quarter. Shortly after Carney sunk two, Bennett earned four with three minutes to go, making her 6-for-6 from the line. A second block from Snyder held the Hawks at 57-35. Two frees from freshman guard Mya Thomas and a layup from sophomore guard Taylor Clayborne in the last 30 seconds were ultimately futile against the scoring deficit, and the Hoyas emerged with a 57-39 victory. The Hoyas out-rebounded their opponents by 10 and shot 35.8 percent from the field as opposed to the Hawks’ 23.5 percent. As Georgetown closes out its non-conference play with a losing record of 3-8, it will look to further strengthen its shooting before taking on the Big East.

The women open conference play on Sunday against Creighton at McDonough Arena. Tipoff is set for 2:00 p.m. ET. For continued coverage of women’s basketball and all Georgetown sports, follow @GUVoiceSports on Twitter.