Home » By The Numbers » Georgetown Senior Auditors Head Back to School 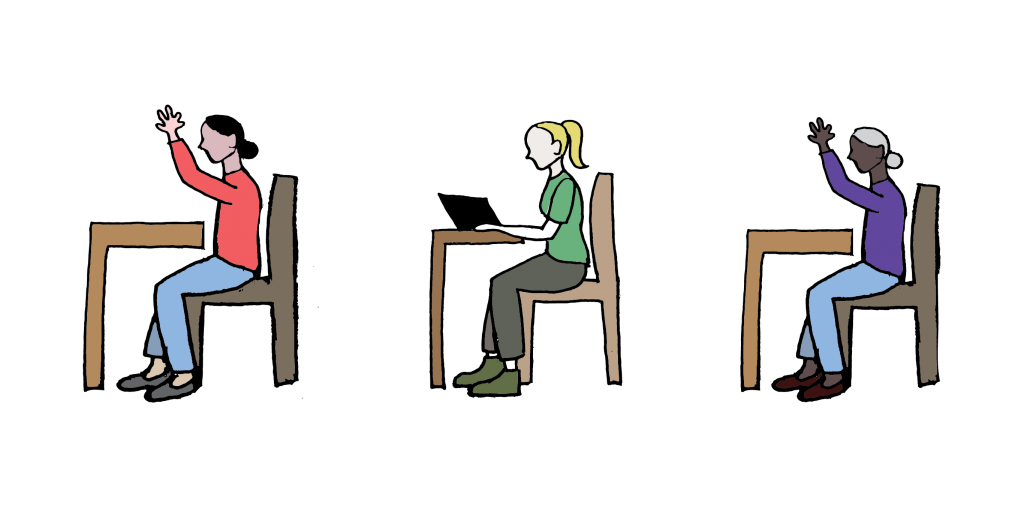 Every Monday and Wednesday, Anne Brill ascends the steps of Healy Hall, always making it to Room 106 a few minutes early for her 2 p.m. English class. She just finished reading a novel of over 900 pages, Charles Dickens’s Bleak House, for Monday’s session. Like the rest of her classmates surely do, she feels a sense of accomplishment now that she has finally completed it.

But Brill is different from the undergraduates in her English class. She is a senior citizen auditor taking Rebecca Boylan’s “London Stories” class this semester. An undergraduate English major at Northern Illinois University in the early 1970s, Brill chose the course because of her passion for the field. “I just love to read literature,” she said.

Georgetown’s Senior Citizen Non-Degree Auditor Program provides people ages 65 years and older the chance to take undergraduate courses in the College. To sign up, D.C.-area senior citizens pay $50 per course and have to ask permission from any professor whose class they intend to take. If there is space available in the course, professors may allow auditors to join. Laura Soerensson, who works in the Office of the Registrar, said auditors at Georgetown fill out add-drop forms that let the registrar know which classes they will sit in on throughout the semester like any other student. This semester, there are 240 auditors on campus.

For many of the adults who participate in the program, auditing a course offers an opportunity to cultivate a continued passion for learning. “I just thought it would be stimulating and good for my brain,” Brill said. “And it’s relatively easy. I mean, I’m retired. I have free time.”

Programs similar to Georgetown’s exist at other universities, too. Some schools, like the University of Oregon, charge no fee for seniors to audit classes. The University of Pennsylvania, meanwhile, charges $500 per class.

D.C.-area colleges provide additional opportunities for senior citizens in the area to audit classes or continue their education. American University’s Osher Lifelong Learning Institute offers courses and activities for seniors. The George Washington University offers auditing opportunities for people ages 60 and older, and the University of Maryland at College Park has a Golden ID Card Program, which gives seniors the ability to access any of the university’s courses.

Auditors at Georgetown come from many professional and educational backgrounds. A majority are retired college graduates who spend their days taking classes in a wide variety of topics. They commonly attend English, History, and Government courses; Anne Ridder (SCS ’82), former assistant dean at Georgetown’s School of Continuing Studies (SCS), says from her 30 years of experience being in charge of the program that these departments are some of their “favorites.”

Trey Sullivan, the current assistant dean of Liberal Studies at the SCS, now oversees the program. He helps auditors sign up for courses and navigate staples of Georgetown life, like NetIDs or GOCards, but he does more than just assist in administrative tasks.

“A lot of these auditors feel forgotten,” he said. “That’s not their words, but as I observe it, they’re not the focus in our society. They’re not the folks who are, quote, ‘the most interesting’ or ‘the most relevant.’ So it’s my role to receive them with hospitality.”

Sullivan sits and speaks with the auditors, checking in with them about their experiences and guiding them through their time on campus. He listens to their stories. From his perspective, his role is to “treat every student with care,” including the senior auditors he oversees.

Though Sullivan said he aims to integrate the auditors into Georgetown’s community, they cannot register for just any class. They can only participate in undergraduate courses at the 400-level or lower in the College, with rare exceptions. Unless they already speak the language and can take courses beyond the advanced level, auditors are barred from participating in foreign language classes.

There are also guidelines for how senior auditors should conduct themselves in these undergraduate classrooms. They are encouraged not to submit essays or take tests, as added grading can prove difficult for professors and teaching assistants. In addition, they are expected not to overtake class discussions. “We essentially tell them you’re there first and foremost as an observer. If you happen to be an expert,” Sullivan said, “and the professor wants you to contribute your opinion, you can do that.”

Though the guidelines for auditors signing up for and attending class are fairly clear, some auditors, like Brill, feel their in-class role can be unclear.

“I kind of feel like we’re not contributing anything,” Brill said. “We’re taking but we’re not really giving. And maybe that’s okay.” To her, the nature of auditing demands that auditors contribute little to class sessions. “It would be nice to feel like we’re giving something in return instead of just benefitting,” she said. “But I know that’s what it is.

When you audit a class, you just sit in and you’re kind of a quiet person in the back of the room.”

However, Brill sees the observational role as important to the maintenance of normal class discussion. In her eyes, an auditor should use the opportunity to learn instead of commandeering class sessions and taking up time undergraduate students might use to discuss texts or concepts. “[The professor] always looks towards the students and wants to get them involved, which I think is the way it should be. I mean, there are times when I’m like, ‘I really want to say something,’ but it’s really not my place to speak.”

Just because Brill does not receive a grade in the course does not mean she neglects the readings and homework assigned by the professor. “I don’t have to write the paper, I don’t have to do a presentation, but I will definitely do all the reading,” she said. “That’s important to me. That’s how I’m getting something out of it.”

Brill also wondered whether it was important for her to attend every class session. When she missed class for vacation, she sent an email to the professor, just in case. “I missed a couple of classes and I was like, ‘am I supposed to let her know that I’m not coming?’ Maybe she doesn’t care, but I just thought to be polite, I would let her know.”

Ridder, who led the program from 1986 when she became assistant dean until her retirement in 2017, remembered only one example of a time she received complaints from professors and undergraduate students about an auditor “taking over” class time. “They participate when asked to participate; they don’t take over the class,” she said. “One out of hundreds and hundreds didn’t get it.”

Ridder saw the program grow from four senior citizens in her first year to 190 when she retired 30 years later. This semester’s 240 auditors come to Georgetown from all over the D.C. area. Ridder said word of mouth helped the program reach the size it is now.

“There were four auditors that first semester that I was working with it, and two of them were walkers back and forth from the neighborhood,” she said. “Their telling neighbors really got it growing.”

Like many auditors, Brill found out about the program from another participant. This year, Brill turned 65 and was finally able to to sign up for the program for the fall semester. “I heard about it from a friend who has taken other classes, and of course, I just became eligible to sign up,” she said. “I looked at the schedule and the classes. I went through all the departments. English is just my love and always has been, so that was number one.”

Brill’s involvement in the program shows the scope of the program has spread. She commutes from Chevy Chase, D.C., located a few miles away from Georgetown on the Maryland border. She drives 15 minutes to the university two days a week.

“Initially it was seen as a gift to the Georgetown community on behalf of Georgetown, kind of some goodwill with the neighborhood,” Sullivan said. Now, the reach of the program has expanded into neighborhoods like Clarendon in Arlington, Virginia and other areas surrounding the District. “We have people coming in from Maryland,” he said. “From all around the DMV area.”

From his standpoint, Sullivan sees the senior auditors that come in as an important component of the university community. He calls their stories “unbelievable,” pointing to the experiences they have shared from their pasts. “We’ve got ambassadors in this program,” he said. “We’ve got people who knew President Kennedy.”

Sullivan said there are auditors who speak five languages and have many other diverse skill sets. “We have nuclear physicists in this program who have made way more money than I’ll ever make and are way smarter than I’ll ever be,” he said.

Ridder also said the presence of auditors has led to real benefits for undergraduate students. She said some students found jobs and internship opportunities after making connections with senior citizens in their classes.

For some, auditing leads them to enroll in a credit-bearing SCS program. Ridder said she saw the occasional auditor enroll in the Liberal Studies program to take additional classes and get a master’s degree.

For other auditors, sitting in on classes is just a hobby and an extension of their academic interests. Brill sees the program as a better way to consume literature than more typical book groups she has joined before. “I love listening,” she said. “I just soak up everything that all the students say.”