Life and Grief Inside An Acorn 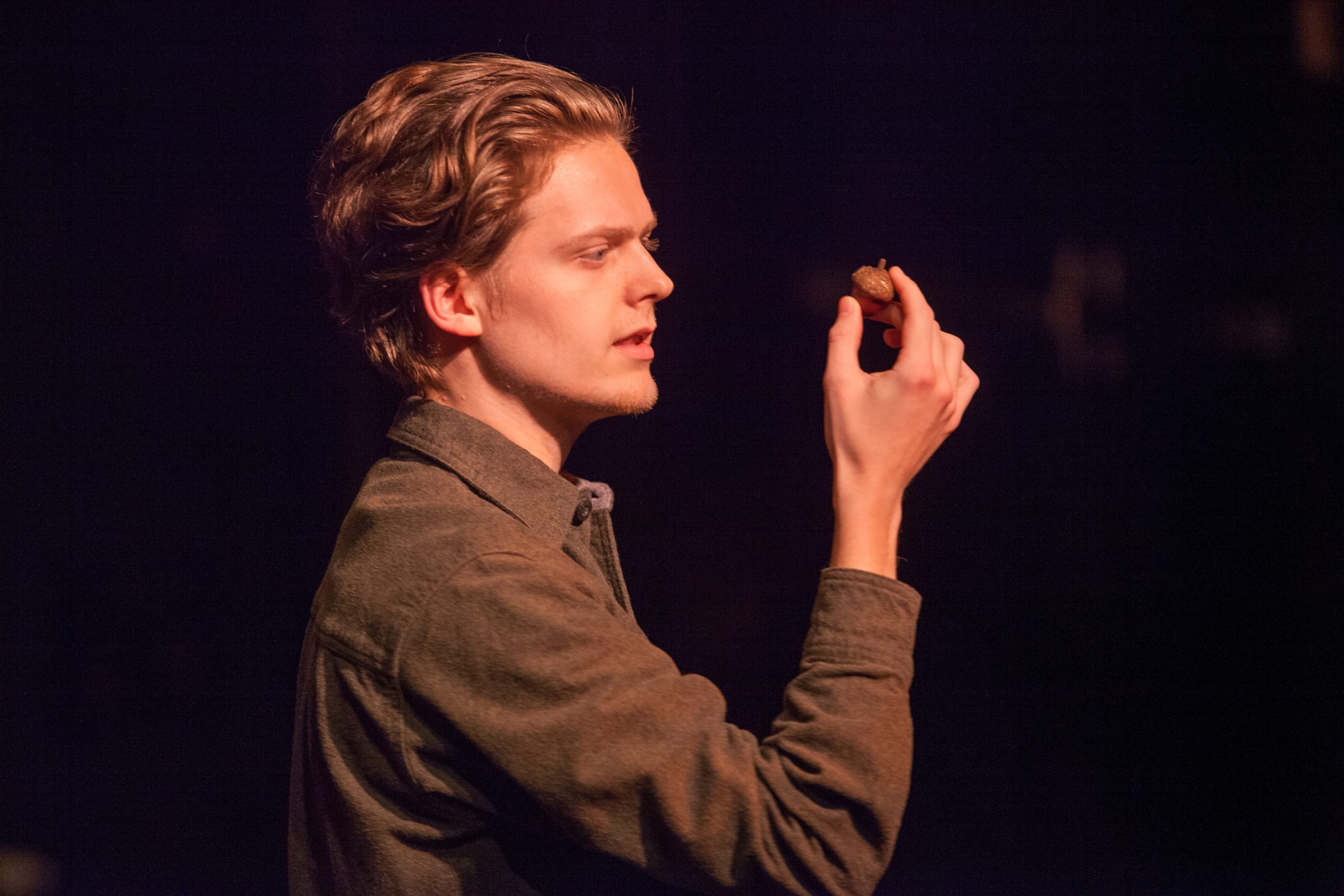 “Optimism is an ugly word. It asks nothing of us.”

“Pessimism is an ugly word. It asks nothing of us.”

“I choose no words.”

Two people stand on opposite sides of the orange-lit stage, yelling at each other, each wearing ragged, almost ill-fitting clothes. They look exhausted, angry, and conflicted, both with each other and with themselves.

An Acorn, written by Caridad Svich and directed by Eliza Palter (COL ’20), is not a play that gives answers to this conflict. In fact, it’s not a production that follows any sort of story, at least by normal theatrical conventions. Rather, watching An Acorn is like watching poetry performed, like seeing a collection of thoughts, memories, and ideas, almost as if they were happening spontaneously. 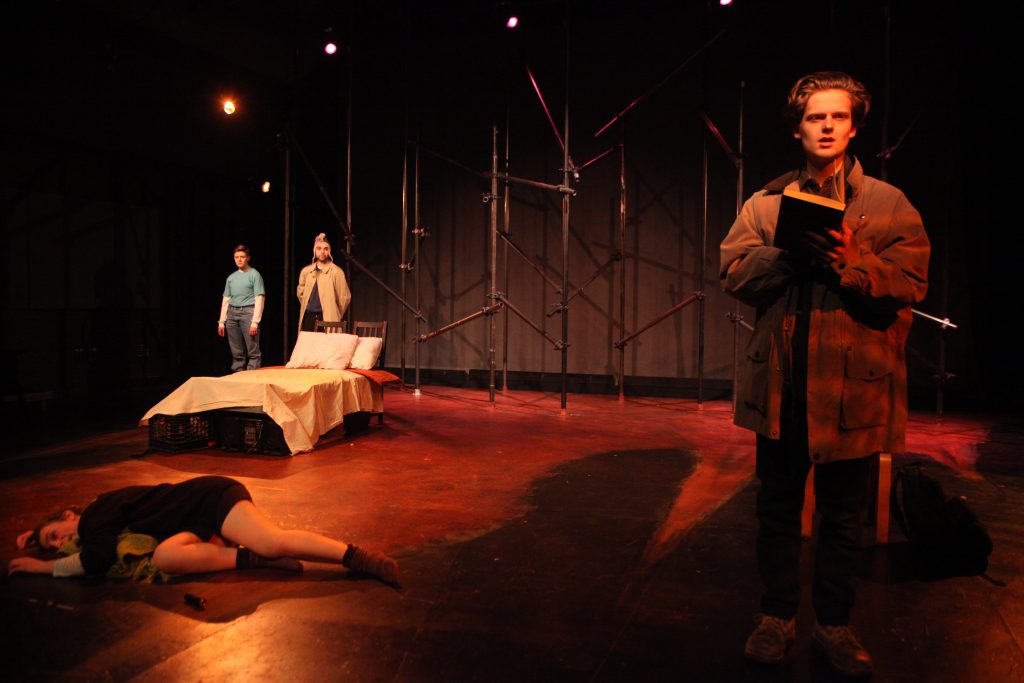 The play mainly focuses on the lives of different Americans experiencing grief, displacement, fear, and poverty in the wake of an environmental catastrophe, but doesn’t limit itself to discussing only climate change. An Acorn also ponders debt and violence, all worsened by the changing climate. It’s non-linear and leaves the audience to fill in the blanks, at times creating confusion about what is actually happening.

Yet this is the magic of An Acorn. It asks difficult questions, and doesn’t really offer, or even consider, any possible solutions. It’s abstract—and therefore might not be everyone’s cup of tea—and at times frustrating. But this creative, bold, different take on environmental grief has a purpose, a method to its madness.

“I wanted to bring a play, a performance, an experience to this campus that reflects a lot of the ideas that I believe we should adopt moving forward in the environmental movement,” said Palter, “Which requires less of an obsession with progress, less of an obsession with plot clarity and a beginning-middle-end moving towards something, moving towards a future, and more of ambiguity and a state of listening.” 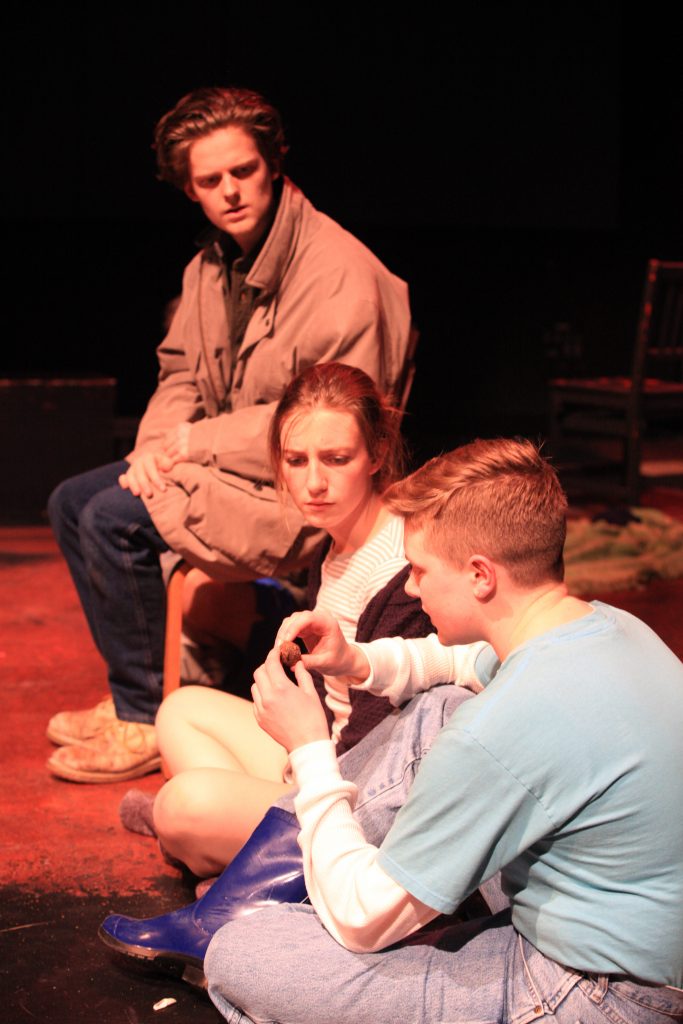 Some of the lines may be the slightest bit cliched (especially the repeated use of the word “sheep” to describe people who mindlessly go about their lives in the face of environmental catastrophe), but even this serves its purpose. It never seems to take away from the overall striking prose or from the immersion of the play.

An Acorn is beautifully produced, which helps immerse the audience in its tense, shattered world. The electronic, beat-heavy music, which plays during each scene, is never distracting, but rather adds to the feeling of oncoming doom with which this play confronts its audience. The lighting, which constantly shifts, always feels thematically relevant, whether it’s a low, glowing orange, or completely dark, save the light from the cast’s flashlights. At various points, the house lights are even brought up, and the actors engage with the audience directly, either confronting or consoling them.

One scene, which is striking both for its beauty and its poignance, involves the cast reading “a letter from the ocean,” illuminated only by the sea-blue glow of a flashlight pointed at a water bottle. In another, low lights illuminate shadow puppets, made by various characters, against a wall.

The set itself is almost entirely sustainably sourced, made from materials found in and around the Davis Performing Arts Center. The layout of the stage is plain, consisting of a few pieces of furniture, some of which are made out of cardboard boxes and milk crates. Upstage has metal piping all arranged to look like bare trees.

“Theatre is a very wasteful field. A lot of people describe sets as ‘pretty trash’ because if you make something beautiful for a show and it’s specific to that show, oftentimes you just throw it in the garbage, because it can’t be used again.” said Palter. “We wanted everything to feel like it could be used in multiple different ways.” 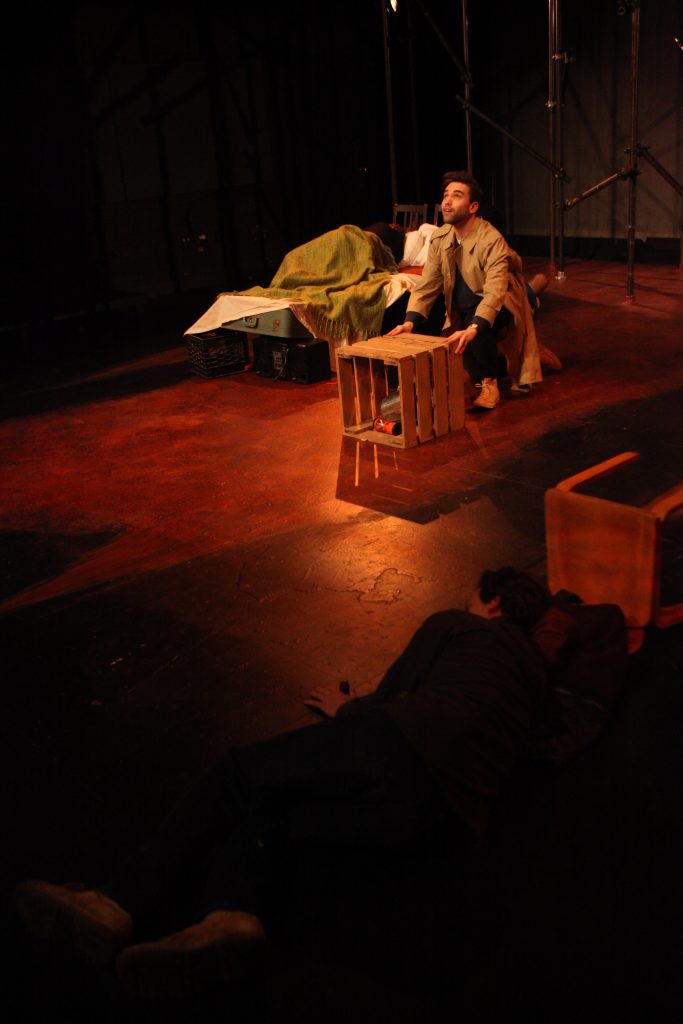 Echoing Palter’s sentiment, the costumes from the play were all sourced sustainably and feature prominently in this production. The clothes are worn worn, layered, and slightly ill-fitting, clearly meant to serve a utilitarian purpose.

“[Palter] told me that she wanted the world [the characters are] in to seem like there had just been—not like an apocalyptic event like in movies or something—but like, a big change that has happened to them because of human destruction of the world,” said Jess Frankovich (COL ’20), the production’s costume designer. She looked at pictures of migrants coming to the U.S. from Central America, as well as people fleeing a hurricane in the Bahamas and the wildfires in California and observed what those people were wearing.”

“People aren’t thinking about brands, they’re not thinking of matching colors, they’re not thinking of asserting their position as members of a certain class. They’re just thinking about survival and warmth, especially in the face of extreme weather because of climate change,” she said. For example, one actor wears a short-sleeved t-shirt over a longer, white shirt, a pair of what look like cargo pants, and a pair of rain boots.

The cast is made up of only five people, each with no distinct role, who manage to deliver strong and compelling performances throughout. It’s clear that environmentalism is already on the minds of many cast members, especially as severe weather dominates the news.

“Since this is my first main-stage play, I struggled a lot with connecting until more real-life events started happening,” said Joseph Ravago (COL ’23). “So, especially, I have lines about places being on fire, and so I really connected with that being about Australia.”

Amelia Walsh (SFS ’20) delivers a performance that is a clear highlight of the play. Walsh’s rage is not only believable, but also deeply moving and expertly conveyed. The scenes that center her are some of the strongest in the play, like the one where she expresses her anger at her significant other and her grief over the environmental crisis. In doing this, she begins tossing pillows about her room, catching and throwing them with other cast members. The stage becomes chaotic as the pace of the tossing speeds up, and you begin to see the desperation in her face. When the tempo slows, you see it in her face: she is exhausted, afraid, and angry as hell.

Surprising and mournful, complicated and relevant, beautiful and troubling, An Acorn is not a play that is easily forgotten. It is a must-see at Georgetown, if not for its subject matter, then for its unique, artistic take.

An Acorn ran from Jan. 29-Feb. 1 at the Davis Performing Arts Center.

Lily Kissinger
Lily Kissinger is a freshman in the College of Arts and Sciences. When she is not writing, she can be found listening to Billy Joel or facetiming her dog.