It’s production week for Black Movements Dance Theatre (BMDT)’s upcoming Spring Dance Concert: Legends, Leaders, Warriors and Other Great Souls. Dancers dressed in all black are spread across the floor stretching. BMDT’s Artistic Director Alfreda Davis comes to the front of the studio and announces, “These coming weeks, you’ll only be able to do five things: eat, sleep, study, check in with your family, and dance.”

For over three decades, BMDT has celebrated African American identity and experience through dance. Though BMDT classifies itself as primarily contemporary-modern, the dancers train throughout the year in all techniques and styles. At this upcoming showcase, which will take place on Feb. 14 and 15, they will perform a classical pointe routine and hip hop routine on top of their traditional modern pieces.

It takes a demanding process to achieve this degree of variability. BMDT’s choreography is consistently complex and intense throughout its many different styles. Davis’s expectations are high, and she pushes her dancers to reach them. The corrections she shouts during run-throughs always result in immediate improvements and adjustments. When she wants them to be sharper, stronger, or faster, the dancers will push themselves to physical limits to manage it. The results of all this hard work are nothing less than a demonstration of both powerful athleticism and seamless grace.

BMDT’s upcoming showcase will be the culmination of over a semester of this hard work, featuring nine pieces created by guest choreographers, students, and Davis herself. This annual concert taking place during Black History Month is intended to continue BMDT’s tradition of exploring the diasporic black experience as well as the individual identities of its members. This year’s theme is specifically intended to celebrate both notable figures in African American history as well as anyone that has contributed to the betterment of the world.

Guest choreographer Simone Stanley’s piece is meant as a commemoration of African American dance legend Katherine Dunham. The dance incorporates Dunham’s personal technique, producing an impressive and creative fusion of traditional African movements with ballet. The piece is also meant to recognize how Dunham politicized dance throughout her career in the 20th century. Student Director Aliyah Williams explains, “Dunham was bold enough to challenge the idea that black bodies couldn’t be ballerinas on stage.” Dunham committed her life to providing the opportunity for organizations like BMDT to exist and thrive, and it’s only fitting that they can now pay homage to her work.

Presenting and celebrating these narratives is a major reason Williams believes BMDT is such an important group at Georgetown. BMDT provides a critical perspective on campus in considering the intersections of identities. Williams asks, “What other group at Georgetown is exploring blackness through dance?”

Though the Dunham piece commemorates a historical icon, Williams’s own piece is intended to reflect her personal experiences here at Georgetown. Choreographed to “Bigger” by Beyoncé, the piece explores struggles with mental health which can often lead to feelings of isolation. Its beautiful contemporary choreography conveys the notion that even when one feels alone or off-track, they are still part of a community that shares their experiences and can support them.

The finale, which Davis choreographed to Nina Simone’s “Go to Hell,” has been over two decades in the making. This time building the piece has been spent figuring out how to best convey Simone’s message of frustration and rage at the discrimination black women in America face. The piece doesn’t just focus on a history of division, however, but is also meant to explore how these divisions can be overcome. Davis explains, “We all face different struggles, different issues, but we all feel. I want to present the common denominator in all of us.” Dancers of different backgrounds and identities are given the opportunity to shine individually, while also collaborating and forming a sense of community on stage.

Davis hopes the audience will take away this message of both celebrating and overcoming our differences from BMDT’s showcase. The goal of the performance is to create an opportunity for discourse around issues of identity and community, and BMDT achieves this effect through thoughtful creativity. “Note that it’s very important what y’all are doing,” Davis repeatedly tells her dancers during rehearsal.

Black Movements Dance Theater’s performance of Legends, Leaders, Warriors and Other Great Souls will take place Feb. 14 and 15 at 8 p.m. in Gonda Theater at the Davis Performing Arts Center. Tickets are currently available here and will also be sold at the door. 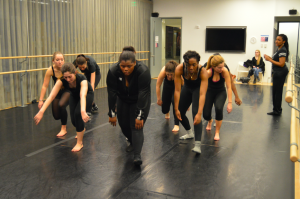 Black Movements Dance Theatre and The Power of Expressive Motion