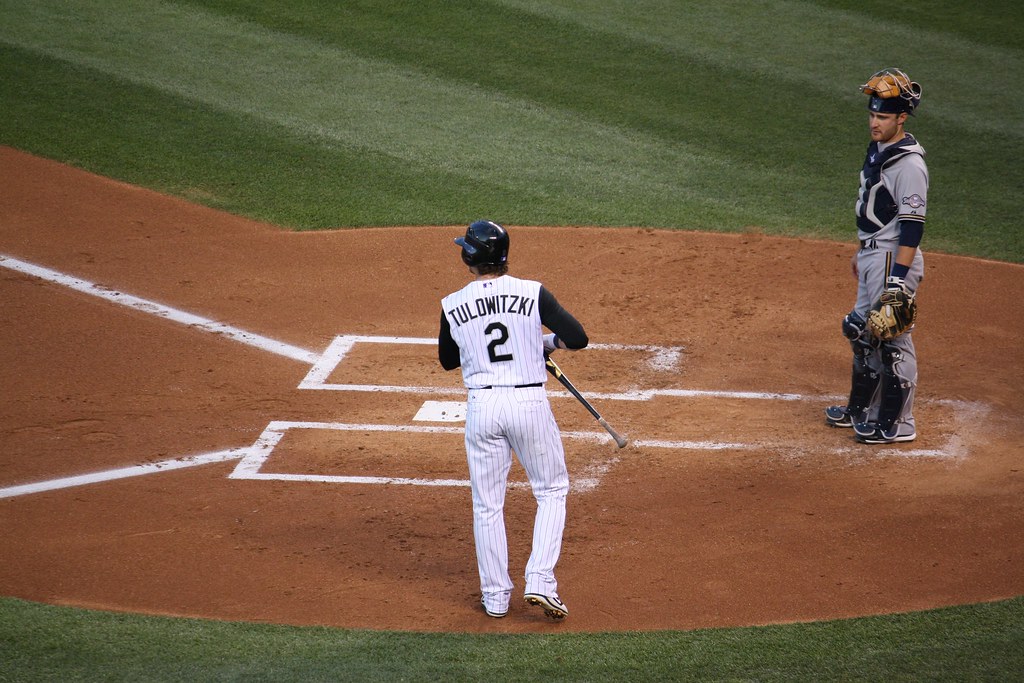 You shouldn’t feel bad for Troy Tulowitzki, the impossibly gifted shortstop from California. His tale is not unique – there are countless once-promising athletes who succumbed to relentless injuries. He lived his dream of playing baseball for a living, ascended to the pinnacle of the profession and made a boatload of money while doing it. So don’t spend all of your sympathy points on Tulo. But, his retirement from baseball in July barely registered as a blip in the baseball news cycle. It’s going to be tempting to forget Troy Tulowitzki, and you shouldn’t do that.

Now that the dust has settled, Tulo’s accomplishments are nothing to scoff at. At the same time, they’re hardly jaw-dropping. #2 won two Gold Gloves and two Silver Sluggers. He twice tasted postseason baseball with the Colorado Rockies. Indeed, two is the most helpful number when trying to summarize Troy Tulowitzki’s career. He only played in 150 games twice in his career, and that’s what most fans will remember about Tulo.

Tulowitzki was born on October 10, 1984, in a laboratory. At least it must have seemed that way when he hit .536 and went 15-1 on the mound as a junior at Fremont High School. Or when he was second-team all-California in basketball. But there was no doubt where Tulo was going to settle.

Troy Tulowitzki was a shortstop. He followed along the road that Cal Ripken Jr. mapped and Alex Rodriguez paved when they introduced the big shortstop – seriously big – that could field his position and hit the cover off the ball. And if A-Rod was the T-1000, the most perfect prospect ever created, Tulo wasn’t far behind. The Colorado Rockies knew what they saw in Tulowitzki: a 6’3”, 205-pound shortstop Adonis who had hit .310 while sporting a career .962 fielding percentage over three seasons at Long Beach State University. The Rockies snapped up Tulo with the 7th pick in the 2005 MLB Draft.

And for a man whose legacy will be dominated by the number “2”, statistics don’t do justice to the feats that thrilled Coloradans for the next decade. Encapsulating just how breathtaking Tulowitzki was only makes his decline that much more painful to stomach. Teammate Charlie Blackmon called Tulo “the best player, like, ever.” Dan Mullen observed that he “pounced on balls that no shortstop had any business getting a glove on,” calling Tulo “at his best, Mike Trout at shortstop.” “Tulowitzki is what Jeter, his idol, always tried to be,” opined Jeff Passan before continuing: “Tulowitzki is also a better hitter than Jeter ever was – a better hitter, frankly, than almost every shortstop in baseball history.”

It seems that Jamey Carroll, playing third base, should have completed the final out of the 2007 NLCS to send the Rockies to their first World Series. Instead, Carroll, who was ranging to his left, lets the ground ball off of Eric Byrnes’ bat pass him by. Perhaps he didn’t think he could muster enough on a throw with his momentum going away from first base. But nobody lets that ball go unless they have Troy Tulowitzki playing next to them. And here comes Tulo, who starts much deeper than Carroll, and frankly was not very close to the third base-shortstop hole when the ball was hit. And Tulo’s putout is so smooth: the pickup on the run, transfer to his right hand, and all-out throw to beat the sliding Byrnes. At full stretch, Rockies legend Todd Helton backhands the ball and raises his arms overhead in triumph without even waiting for the umpire’s call. The 50,213 at Coors Field knew they had just watched a special connection, the veteran franchise player combining with the heir to his throne, this precocious, mullet-sporting shortstop oozing with swagger, to give a football city their first chance at a baseball title.

The Red Sox pushed aside Colorado in four games in the World Series. Tulo would reach the postseason three more times, again with the Rockies and on two other occasions with the Blue Jays on the downswing of his career, but he never got another opportunity on the game’s biggest stage. As the Tulo experience at-large would unfold, the potential burned brightest at the beginning.

The tremendous Joe Posnanski recently asked his followers on Twitter to name the first player that came to mind when thinking about a “five-tool player.” In other words – who could do it all: field his position with a bazooka for an arm, run like the wind, hit effortlessly for contact and for power? The names that popped up most frequently in his responses – Willie Mays, Ken Griffey Jr., Trout, and Mickey Mantle – are players with untouchable legacies, as first-ballot as first-ballot Hall-of-Famers get.

But, as Posnanski points out, the eleven players most often mentioned in response to his prompt were all outfielders. In the infield, Posnanski thinks A-Rod to be the finest (and perhaps only) five-tool player.

Tulo had the chance to join him in that club. He was that good.

His counting stats will never measure up simply because Tulowitzki just couldn’t stay on the field enough. It’s well-established that Tulo was a magnificent fielder. He didn’t have straight-line speed as much as he had simply preposterous athleticism. Passan continued with the Jeter comparison: “Jeter had the jump throw – Tulo had the jump throw and about 50 other tricks.” He finished first in fielding percentage among NL shortstops four times. For a player who played in 150 games or more only twice, as we’ve established, it’s ludicrous that Tulo led the National League in double plays on three occasions. He completed the 13th unassisted triple play in baseball history as a rookie.

And, oh, Tulo was a menace at the plate. From 2009-14, he hit .309/.385/.553 – numbers that hadn’t been seen by a shortstop since A-Rod. He would wiggle his lead foot in the air on the pitcher’s windup before driving it into the ground, and the rockets that came off his bat drove Tulo past the tired arguments about thin-air stats inflation and squarely into conversations about baseball’s best player, with a chance to become an all-time great.

Even by cumulative numbers and awards, Tulowitzki was blowing past the next-best shortstops. If Tulo was going to get 120 games in, you could count on him finishing among the National League’s most valuable players. In 2014, with only 91 contests to his name, Tulo somehow finished sixth among NL position players in wins above replacement (WAR). From 2009-14, a six-year stretch in which he could only average 113 games per season, the game’s foremost shortstop collected fifty percent more WAR than his next closest contemporary at the position.

One of the great tragedies in recent baseball history is that the Rockies could never give their lineup the pitching help it deserved. Colorado had quite an imposing group to complement Tulowitzki throughout his prime, featuring Carlos Gonzalez, Helton, and later, an emerging star trio of Nolan Arenado, Blackmon, and DJ LeMahieu. But to call their rotation and bullpen during this period below average would be an insult to mediocrity, and the Rockies could never outhit their pitching woes enough to earn a playoff berth after 2009.

Tulowitzki ended up signing a 7-year, $134 million extension in 2010 with three years remaining on his current contract. That megadeal seemed like a prudent move for the Rockies and their homegrown star whenever he was on the field, but the narrative around Tulo had irreversibly changed by 2014, his age-29 season. He missed time due to knee, left groin, left hip, right quad, hamstring, right ankle, right calf, and other ailments in his career, but the leg injuries stand out as particularly gutting. In an era when every argument’s beginning, middle, and end are statistics-based, there was something so pleasing about how Tulo commanded the six spot on the diamond, with such alarming grace and finesse for a player of his stature.

Robbed of his legs, it was only a matter of time before Tulowitzki called it quits on his career. He had too much pride to bounce around AL teams on one-year contracts, playing a serviceable designated hitter. Because Troy Tulowitzki was a shortstop.

After two and a half unceremonious seasons in Toronto (where his injury count only piled higher), Tulowitzki tried for one more crack at the can with the Yankees last season. And when Didi Gregorious got hurt, Tulo had chanced upon his dream job on Opening Day. He was the shortstop for the Bronx Bombers, the job his idol, Jeter, had made into something more like a mythical lifestyle.

Tulowitzki strained his calf and went to the injured list after only five games in pinstripes. He would never play another Major League Baseball game.

Athletes rarely get to go out on their own terms, and Tulo was no different. Modern sports fans have been spoiled to be able to watch Messi, Ronaldo, LeBron, Trout, and Brady at the peak of their powers, so perhaps our appetite for greatness has been sated. Perhaps it doesn’t hurt as much that someone so brilliant at the quintessential American position slipped through our fingers. Because we had Tulo in our grasp for fleeting moments – an unfathomable jump throw from left field here, a hanging curveball deposited into the Coors Field concourse there.

Zach Kram wrote that “Tulowitzki was the promise of the perfect baseball player,” which makes sense because the perfect baseball player’s career would invariably end with a plaque in the Hall of Fame. Tulo’s career ended with another visit to the 60-day injured list and a quiet midseason retirement at only 34 years old. The promise had been broken. There would be no enshrinement in Cooperstown. But that doesn’t mean I’ll forget Troy Tulowitzki.

An Ode to Washington’s Nationals