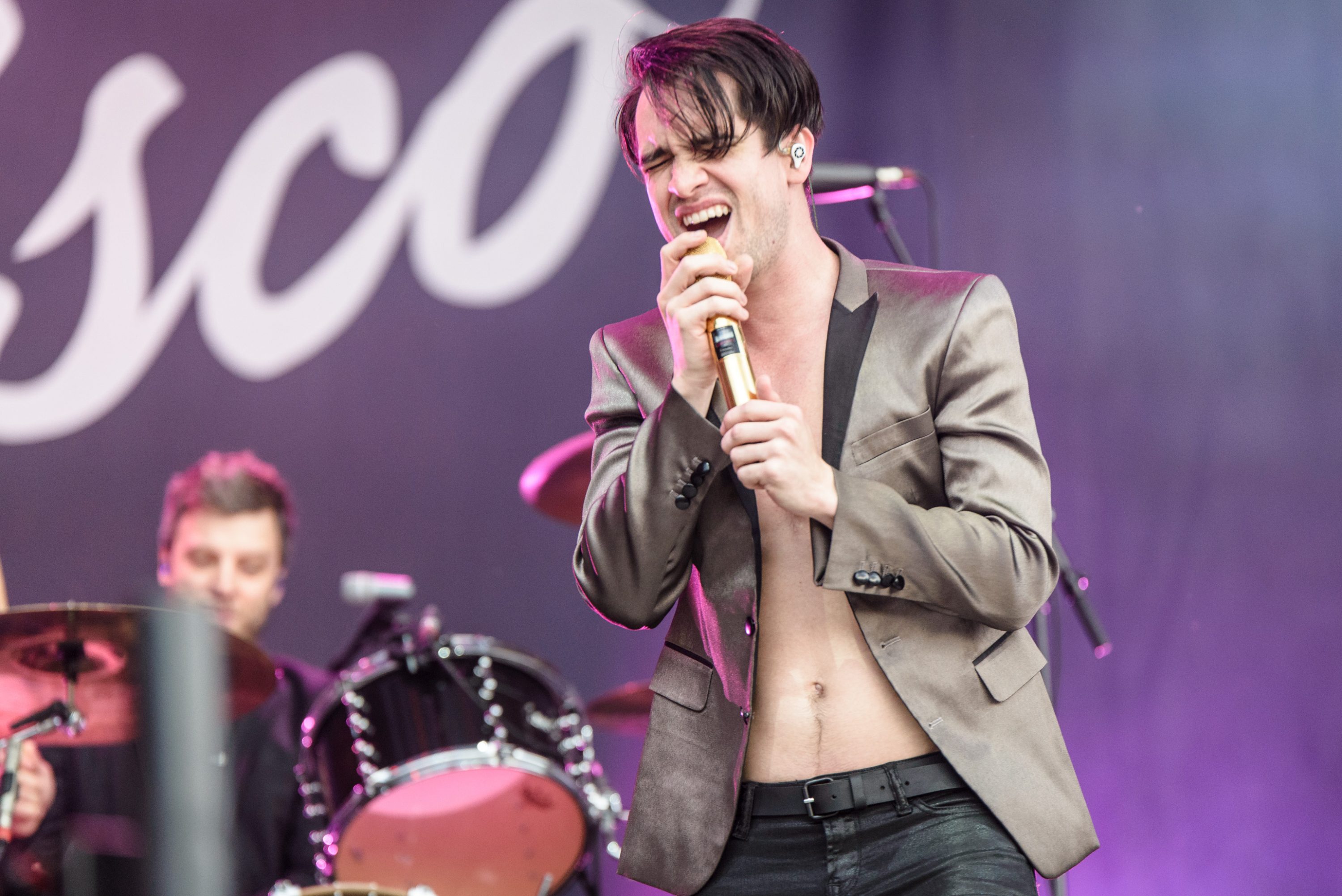 On a humid June night, my friends and I danced on the discount-ticket lawn to Panic! At The Disco’s throbbing melodies and Brendon Urie’s sonorous voice. Our long shadows stretched up the indigo hillside, our sweaty bodies bleached in the stadium lighting. Before us, the stage glimmered like a Las Vegas dancefloor; Urie’s thin frame curled in a backflip. We had just graduated from high school and into newfound self-expression, and Urie’s performative recklessness seemed fitting to usher in my new era of freedom and mistakes. I didn’t know it then, but that moment was the beginning and end of an illusion.

It was 2016, and Panic! was touring for their most recent album release, Death of A Bachelor. But at the concert, though Panic! performed a song from every album, they performed only one from my personal favorite: Pretty. Odd. (2008). Perhaps it was because that album, Panic!’s second studio album, is itself pretty odd compared to the rest of the band’s discography. Situated between Panic!’s raucous debut and the tragic Virtues and Vices (2011), Pretty. Odd. is an uncanny burst of sunshine that has never since resurfaced in Panic!’s work. Pretty. Odd. is the hole in the illusion, the gap between what Panic! was and what I thought I was doing there.

Panic! At The Disco catapulted into the music industry in 2005 with the release of A Fever You Can’t Sweat Out, a provocative conglomeration of emo pop rock. The songs wear hopelessly long titles: “The Only Difference Between Martyrdom and Suicide is Press Coverage,” “Lying is the Most Fun a Girl Can Have Without Taking Her Clothes Off,” “But It’s Better If You Do.” These peculiar phrases are pulled from other works: the first is from Chuck Palahniuk’s satirical novel about a person who was raised in a death cult; Natalie Portman spoke the latter two as a stripper in the movie Closer (2004). The lyrics are likewise loquacious and irreverent, proclaiming the haughty confidence of the teenagers who wrote them.

Fever lays the groundwork for the best of what Panic! would create: the band’s sensational imagery and elaborate narrative style is now signature. The album itself is foretelling in the sense that it is a collection of promises, of self-dares, that only a band of teenagers still sleeping in their tour bus could get away with. “London Beckoned” blends their dreams with demands: “We’re just a wet dream for the web scene / Make us it, make us hip, make us scene.”

Susan Sontag wrote that naivety brews the best camp; Fever is why I believe her.

With their second album, Panic! slowed, softened, and sunk deeper into their narrative style. If Fever comprises dares and promises, Pretty. Odd. comprises letters, whispers, lullabies, poems. Individual songs range from sunny and dazed to intricately introspective; as a whole, the album radiates content resignation. As if to reflect their gentle shift, the band dropped their exclamation point, and remained Panic at the Disco until 2009.

Through Pretty. Odd., Panic!’s verse grew distinctly poetic. Lyrics ripe with nature motif float along Beatles-esque melodies, which capture the sympathetic high of classic rock and summer evenings. “Northern Downpour,” a melancholic ballad, is the core of the album’s style and theme. Over a soft guitar rift, arises Brendon Urie’s pensive croon: “If all our life is but a dream /Fantastic posing greed / Then we should feed our jewelry to the sea / For diamonds do appear to be / Just like broken glass to me.” The piano only dares to enter on the second verse, the first reference to writing and memory and a note: “Northern downpour sends its love.” A warm energy builds toward the song’s sole demand, that the moon “forget to fall down.”

Pretty. Odd. has a celestial quality, manifest in personification. One song’s title, “The Piano Knows Something I Don’t Know” suggests a speaker blissfully mystified by the world. It is the same sensibility that renders the more moody songs so peaceful: “I know it’s sad that I never gave a damn about the weather / and it never gave a damn about me. . . / I know it’s mad, but if I go to hell will you come with me?”

It is a small miracle that the melodramatic narrative of Pretty. Odd. survives into Panic!’s subsequent three albums—considering that Ryan Ross, lead guitarist and primary songwriter of Pretty. Odd. and Fever, left the band in 2009.

Panic!’s trajectory from Virtues and Vices (2011) forward is, more than anything, the process by which lead vocalist Brendon Urie became all of Panic! At The Disco, and Panic! At The Disco became Brendon Urie. Panic!’s campy theatricality, which remained alive and well until recently, evolved from emo rawness to something more cinematic. Fever and Pretty. Odd. faded into Urie’s origin story—even though Urie was not a primary songwriter until Virtues (on which, notably, Ross retains a songwriting credit). The illusive lore pairs conveniently well with the rumor that Urie and Ross had once dated, suggesting that Ross left the band when they broke up.

The lyrical content narrowed to Urie’s burgeoning persona. Urie sang his secular tales of love, loss, and vice through religious metaphor in an echo of his abandoned faith. At first, this was brilliant: The hit chorus of the 2013 track “This Is Gospel,” “If you love me, let me go,” is uplifting and empowering. Unfortunately, it’s easy for such success to inspire stale re-creations later on.

That is, Pray for the Wicked (2019). One album prior, Death of a Bachelor (2016) elegantly blended Frank Sinatra’s sonorous style, inspired in honor of Sinatra’s 100th birthday, with the Panic! sensibility. Pray for the Wicked makes it seem as though Urie’s foray into jazz was only a stepping stone to the likes of Bruno Mars (see, for example, “(Fuck A) Silver Lining,” which opens the album).

But the real problem of Pray for the Wicked is its apparent misunderstanding of what has made Panic! successful so far. It is as though Urie and his team of composers merely glimpsed at Urie’s archetype—disenchanted, party-going ex-church boy—and conjured generic circumstances accordingly. “One of the Drunks” is “about” parties and alcoholism, similar to the addiction-ridden heartbreak of Too Weird to Live, To Rare to Die (2013), but it lacks the sharp verse that once gave nuance to Panic!’s expression. The logic of “Say Amen (Saturday Night)” is even more cringe-worthy: the branded Christian reference is more of a sarcastic joke with a catchy tune than a tailored metaphor. “Say Amen” has the impression of a song that Panic! would sing, looking at Urie’s archetype, but the illusion lacks what I have always loved most about the band: the poetry of Pretty. Odd. The Panic! I thought I knew dissolved.

I have been lying, subtly, for years. I brewed my own illusion as I attempted to make sense of my life through music. The appeal of emo pop music is the mirror it holds to your personal idiosyncrasies. I hung a poster of Brendon Urie in my college dorm room. Finding myself as a pink-haired college student in a P!atD T-shirt, I joked that I was the punk I always thought I had been in middle school. But the first songs that I ever heard of Panic!’s were off Death of a Bachelor, released the year I graduated high school, when I attended that lovely summer concert. I have since espoused a lasting personal connection to the band. But what if the value I saw in the music was something I wanted to see, and not something that was there? A lie of nostalgia let me dodge the question.

Why does it matter? It’s true that Panic! was part of my coming-of-age experience. Panic!’s music introduced me to an outlook on loss, growth, mistakes, and a certain queerness that I found compelling, fulfilling, and attractive. The lyrics confronted peculiar and complex themes with depth and style; the intricate, melodramatic verse lent the songs their distinct humanity.

The question then, in considering the albums that mean the most to me, is whether I’m pursuing content, style, the lives of composers, or some amorphous memory I’ve buried in myself. Perhaps that memory, that nostalgia, has left me incapable of objectively critiquing Panic!’s, or Urie’s, evolution of creative choices. Perhaps it is time to let go.

When is Brendon Urie working on Panic! at the Disco’s seventh studio album?