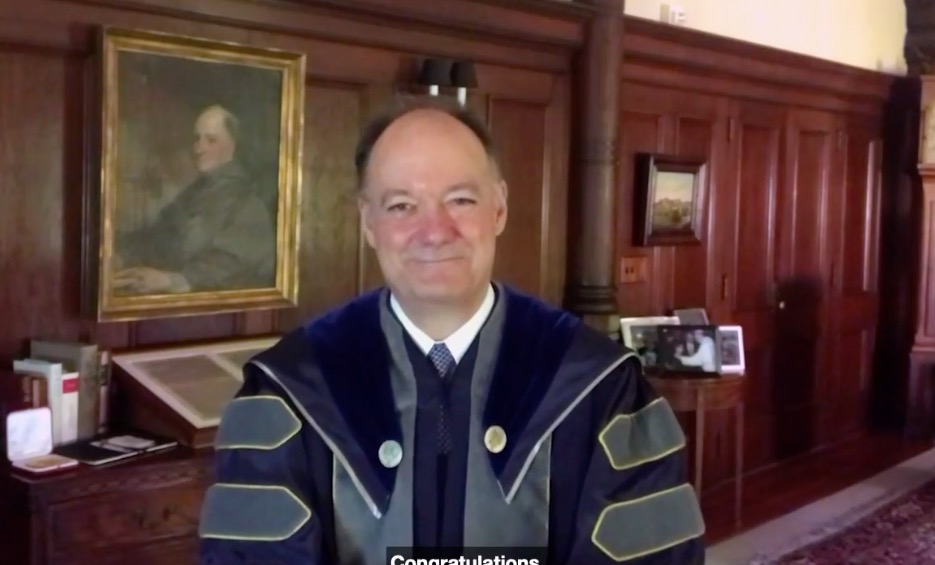 Instead of sitting in a crowd of family members and fellow graduates on Healy Lawn during a weekend full of commencement ceremonies, members of the Georgetown class of 2020 tuned into videos broadcasted on Facebook Live and YouTube for recognition of their academic accomplishments.

The university’s scheduled virtual commencement services began with a ceremony for the School of Continuing Studies on May 13 and ended with a Baccalaureate Mass on May 17. The central event of this virtual commencement weekend occurred on May 16, with the Conferral of Degrees in Course unto graduates of all Main Campus, Medical, and Law Center programs.

Broadcasted on the university’s Facebook page, the Conferral of Degrees amassed 6,000 live viewers and over 3,700 comments—most of them personalized messages of congratulations. The circa-25-minute-long ceremony featured a video montage of commendation and advice from prominent alumni and an address from University President John DeGioia. DeGioia reaffirmed the university’s commitment to hosting an in-person commencement gathering for the class of 2020 at a later date and praised the Georgetown community’s response to the extreme changes brought about by the COVID-19 pandemic. “It has been a source of consolation and inspiration that you have accepted responsibility for caring for everyone around you,” he said.

Jack Ryan (COL ’20), who watched the ceremony from his home in Sacramento, California, was grateful to have some kind of recognition for the scheduled commencement weekend. “It was much better than having to go through this weekend without any sort of ceremony whatsoever and having to wait for an official in-person ceremony,” he said. “I’m definitely glad they did something and I thought they put together a really nice video.”

For Angela Perez (COL ’20), however, the virtual ceremony was primarily a reminder of what she was missing. “This could have been something different and it kind of feels like I’m living in an alternate universe where everything that could go wrong did,” said Perez, who watched the ceremony from her home in Queens, New York as her relatives tuned in remotely. “There’s like a version of me out there who actually got to walk down on the lawn and have a proper graduation.”

Some students turned to the university’s additional virtual commencement ceremonies for a more personalized experience. Each undergraduate school hosted its own Tropaia and general class recognition service on May 15. At Tropaia ceremonies, students are presented with awards for recognition in certain academic disciplines.

Carolyn Kirshe (MSB ’20), who received the McDonough School of Business Marketing Faculty Award for Academic Excellence, appreciated the Tropaia’s opportunity for individual acknowledgment as opposed to the more general nature of the Conferral of Degree ceremony. “The broader commencement ceremony I found out like an hour before that we wouldn’t even be named,” Kirshe said. “It was less personal and therefore less meaningful.” Last year, the university hosted commencement ceremonies for individual undergraduate and graduate schools in which each student was named as they walked across the stage to accept their diploma.

While in years past each school’s graduation service would feature a guest speaker, the Tropaia ceremonies for the MSB, NHS, and SFS centered the words of university faculty and students. The ceremony for the College featured a six-minute video message from comedian Mike Birbiglia (COL ’00) in which he advised members of the class of 2020 to embrace the unexpected. “You’ve been robbed of this moment and that might be the best-case scenario because you’ll be forced to create that moment for yourself,” he said. “Celebrate your plan C, cheer for your plan D, hope for your plan E. That’s what will make you the graduate you were meant to become.”

The decision to hold these virtual commencement festivities was relayed to the student body in a May 5 email. On March 18, DeGioia announced that in-person commencement ceremonies for the class of 2020 would be rescheduled. “We have made the determination that it will be necessary to postpone Commencement activities to a time in which we can safely convene as a community,” he wrote in a general email to the student body. The statement came after petitions circulated amongst students and parents requesting that the university delay an in-person commencement instead of canceling the event entirely. The petition for seniors and parents ultimately amassed 1,172 signatures, and the schoolwide one had 2,250.

In addition to current virtual events, other universities in the District have also offered some form of future live ceremonies to their class of 2020 graduates. Catholic University plans to hold theirs on Aug. 7 and American University on the weekend of Dec. 11. Howard and George Washington have stated their intentions to host ceremonies for the class of 2020 next year.

Amanda Hu (SFS ’20) looks forward to Georgetown’s promised in-person commencement gathering but believes it is important to delay the event until it is accessible for everyone. “I would want my grandparents to be there,” she said. “I would not bring them if it were happening sooner.”

Hu is set to enroll in graduate classes in the Fall semester to earn her Master’s in Security Studies as part of a five-year program. She recognizes that this would help her attend any future graduation ceremony. “I think it’s a little bit easier for me since I’m going to probably be in D.C. anyways,” she said.

Others may encounter more logistical challenges with this rescheduling, as graduates leave the District and try to find full-time employment. Though Perez wants to attend the in-person commencement, she is wary of all the coordination it will require. “It’s going to be extremely difficult to get everybody back together again safely,” she said, referencing her family from the Philippines and international students. “I just still feel robbed.”

To Kirshe, the awaited commencement ceremony may take on an additional significance precisely because it was postponed. “Whether it happens in the next few months or next year, it might be nice in its own way for our class to all reunite—kind of like a one-year college reunion that is all the more meaningful because we weren’t able to be together when we graduated,” she said. “I hope to see as much of my class as possible.”