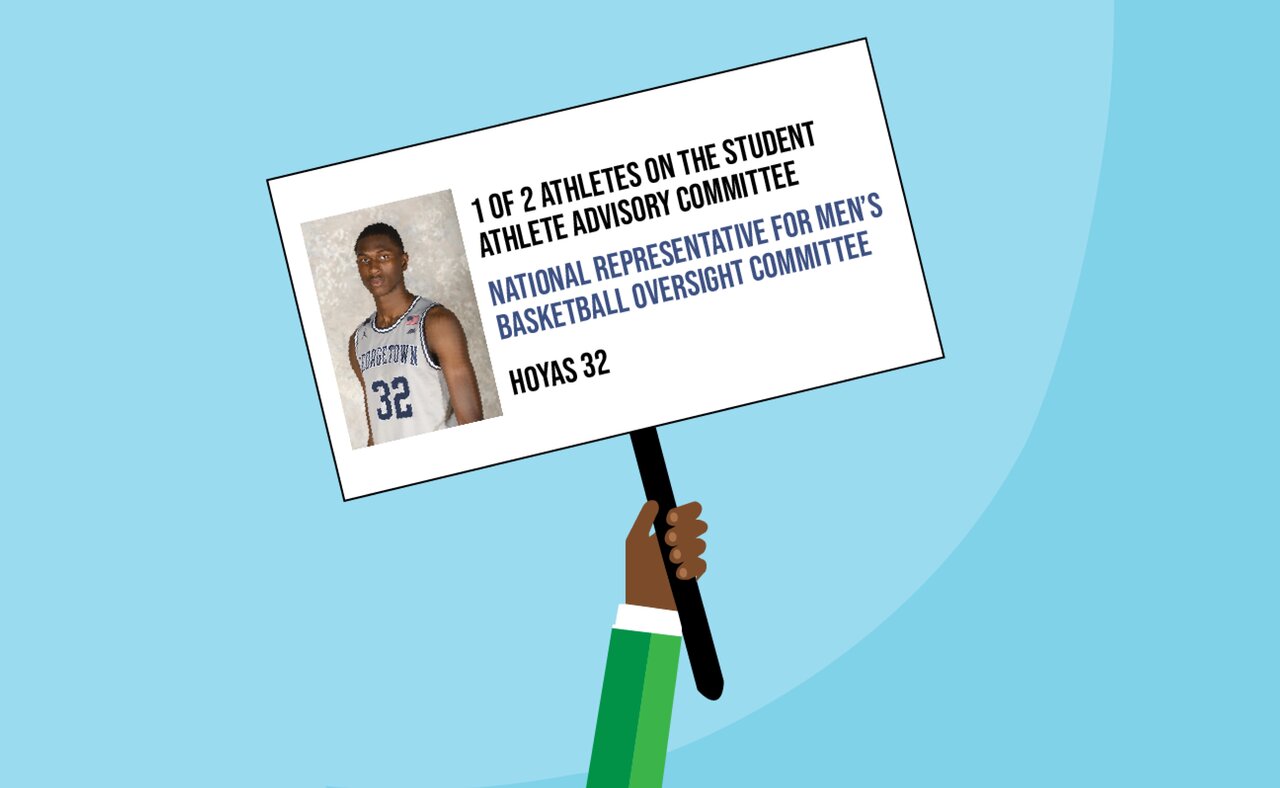 Amid the turbulence of college sports in 2020, Georgetown basketball has a new entry in its long history of advocacy on and off the court. This fall marks the ascension of sophomore center Malcolm Wilson as a national representative for student athletes on two NCAA committees: the Student Athlete Advisory Committee (SAAC) as well as the Men’s Basketball Oversight Committee.

Participating in these bodies presents the opportunity to help consider NCAA policy and channel athlete perspectives, a particularly pressing task at a time of unparalleled uncertainty and athlete activism across the sports landscape. As he approaches this daunting new responsibility, Wilson spoke with the Voice about his role and the perspective he brings to representing student athletes.

It was in the summer doldrums that Wilson found both the drive and opportunity that would lead him to this position. At home during quarantine in Columbia, South Carolina after a redshirt freshman season, Wilson found time to reflect on his first year. Though he had not pursued student-athlete advocacy in the past, a year of experience provided a blueprint for action.

“It was good to see other students and how they were getting things done. That just made me want to do more than what I was doing,” said Wilson. “I was approached and asked about whether I’d be interested. And I said yes.”

In close consultation with coaches and other counselors, he then navigated a multilevel application process that included passing both intraconference and national applications.

Both SAAC and the Men’s Basketball Oversight Committee play distinct roles within the NCAA’s labyrinthian overall structure. SAAC is a general body of Division I student athlete representatives from each conference. Its purpose is to represent student athletes and improve their experiences, declaring in its mission a commitment “to enhance the total student-athlete experience.” By bringing together individuals from a variety of sports and schools within Division I, the SAAC is able to provide student athlete perspectives as it reviews and comments on NCAA policy measures. It also can issue recommendations and help set certain bylaws.

As opposed to the broad SAAC role, the Men’s Basketball Oversight Committee reflects a narrower, though equally important focus. It is responsible for directly weighing in on NCAA Men’s basketball policy, including season and postseason structures as well as potential rule changes. The Oversight Committee is also charged with maintaining and improving the public perception of college basketball overall.

Among the members of the Oversight Committee are multiple Division I athletic directors and men’s basketball head coaches, as well as other significant conference officials and administrators. One of only two student athletes on the 16-member body, Wilson is joined by Baylor’s sophomore point guard Jared Butler, and the two have already spoken as they prepare for their term.

Wilson is clear on his fundamental goal. “My role is to be a representative for the student athletes, the men’s basketball student athletes across the nation,” Wilson said. “We’re really supposed to be another voice in the room on decisions being made that affect us.”

Wilson is not arriving with preconceived notions or agendas. Rather, he says his consistent focus is adding the student athlete perspective to any decision-making process in order to “bring the experience of a student athlete and use that to kind of weigh out the things that are being put forward.”

Entering fall 2020, both the SAAC and Oversight Committee are confronted with the ongoing challenge that the COVID-19 pandemic poses to college sports nationwide. Speaking just after Georgetown’s basketball team was able to return to campus, Wilson described player safety as a prerequisite for starting the men’s basketball season. Because he only officially joined the Committees this fall, Wilson noted that significant pandemic planning during the summer predated his term. He nonetheless expressed confidence in the plans and the upcoming oversight process he will have the opportunity to participate in.

In fact, these issues were presented at their first virtual meeting in September, where the Oversight Committee approved a number of NCAA measures to prepare for the shortened upcoming season. Pandemic adaptations were joined on the docket by a policy proposal originating with the SAAC and approved by the NCAA to ensure that contests would not be held on election day to facilitate student-athlete participation. With just a month in the books, these measures show the real changes Wilson can be party to over his term, which runs until May 2022.

Despite the adversity of current conditions and the enormity of NCAA bureaucracy, Wilson also expressed confidence that student athlete perspectives would be meaningfully listened to. “I think that all of the coaches and all those within the NCAA, they really value what me and Jared would have to say,” said Wilson. “Hopefully, they [the NCAA] wouldn’t ask for me to come if they were going to just sit me in the corner and ignore me.”

Grappling with the challenge of representation, Wilson was open about the difficulty of channeling the broad, varied experiences of student athletes nationwide. In light of being one of only two students on the Oversight Committee, Wilson noted the importance of adequate student athlete involvement.

“The more voices, the better from student athletes,” Wilson said. “At the same time, too many voices can kind of slow things down. So it’s good to have representatives.” Within that framework, Wilson affirmed his cardinal commitment to weigh in constructively on student athletes’ behalf.

Though this is a new experience for Wilson, key preparation and support comes from the legacy of the Georgetown basketball program. The precedents set by former men’s basketball head coach John Thompson’s stands for social justice and the ongoing, outspoken support of Head Coach Patrick Ewing for student athlete activism weigh on Wilson. Especially when athletes at all levels are calling for change, Wilson was clear that being on these committees is just one avenue for him.

“I see myself using my platform to really push for the things that I believe in. That’s what I’m on the committee for, is to speak up about how I feel,” said Wilson. “Whether it’s through the committee or social media, or face to face, that’s how it’s gonna be done.”

With the Georgetown basketball program and community still mourning the loss of Coach John Thompson Jr., Wilson also shed light on how he remains an important influence. He illustrated how he draws on Thompson’s ideas, referencing Thompson’s saying about being more than the eight to 10 pounds of air in a basketball.

“I think that this role really works into that, because I’m doing more than just being a basketball player,” Wilson said. “I’m really trying to get involved within the group on campus, but also other people, I’m going to do my best to represent them too.”

This vision of basketball as more than just a contest or box score clearly demonstrates how Thompson’s legacy reverberates through the program and connects to the broader empowerment of athletes today. On a personal level, Wilson’s participation in these leadership roles also fulfills Georgetown basketball’s commitment to excellence and personal development. Hailing back to Coach Thompson, Hoyas were defined by rigid academics as well as athletic standards. This idea is also integral to the SAAC’s mission, which includes the notion that the student athlete experience should include a genuine commitment to personal and leadership development.

Engaging with student representatives, athletic directors, coaches, and other administrators as they weigh live decisions will be a new experience. Wilson encapsulated this role’s significance for him. “This is really going to give me the opportunity to be a leader on my team,” he said. “Even for people back in South Carolina, who reached out to me, it’s a tremendous opportunity.”

On the whole, Malcolm Wilson fortuitously picked one of the most difficult and urgent times to assume the mantle of representing student athletes. As he prepares for his first season on the court with the aspirations to a Big East championship, he has taken on an entirely new challenge. Yet despite the complexities of grappling with pandemic adaptation, NCAA minutiae, and broader social justice, he retains his central goal. Succinctly put, he says, “I want to do the best for everybody and myself.”