What Can We Learn From College Football’s Contrarians? 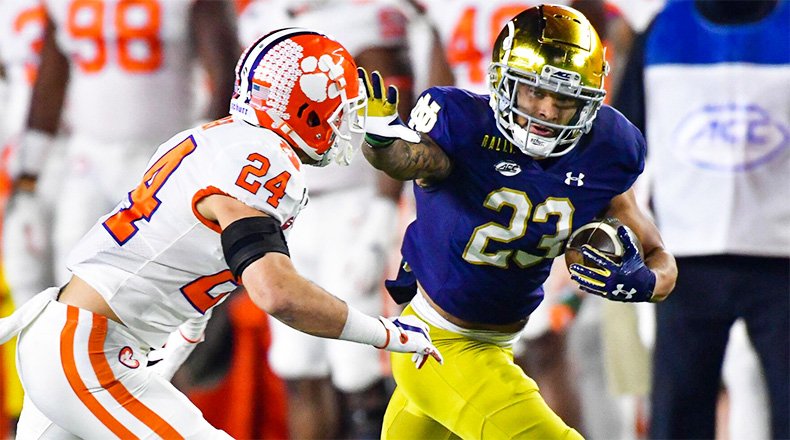 For as much fun as following college football is, those that can see the forest beyond the trees will point out that the game has become a bit repetitive. The same handful of teams are in the College Football Playoff conversation year-to-year. The same conferences are competitive, and since all we talk about is the CFP nowadays, we miss out on some great stories happening among the 126 other teams.

The thinking about how to build a contender has also become single-minded. Long gone are the days of awesome stylistic clashes between Alabama’s ground-and-pound attack and Auburn’s hurry-up, or Florida State’s pro-style offense versus the Oregon Ducks blitzkrieg. If you want to survive in 2020, the thinking goes, you better have installed the spread yesterday. And don’t bother hiring a head coach with a defensive background, no matter his qualifications – your options are a players’ coach that will be able to recruit like crazy or an elite offensive mind that can scheme up touchdowns in his sleep.

This leads to the best players always signing with the same schools, as evidenced by Alabama finishing with the #1 recruiting class seven years in a row between 2011-2017. . There’s no real Ben-Simmons-to-LSU stuff going on at the top of recruiting boards because it’s too risky in football. Recruits go to the school with the coaches and resources that offer them the best chance to make it to the NFL in three or four years’ time.

It’s easy to appreciate the teams that are approaching things a little differently. Mind you, there’s a reason the Alabamas and Clemsons of the world are doing what they’re doing. It’s a winning formula, and it’s an easy sell to fans. We probably aren’t going to see a program throwing caution to the wind like Georgia Tech running the triple option or Coastal Carolina hiring the former CEO of TDAmeritrade as head coach (look it up) for a long time. But for the teams that have been floundering for a decade too long, maybe pushing the reset button has to involve something more than firing your coach. I’d like to celebrate the teams that have created their own identity with some success.

Notre Dame: The perception of Notre Dame has been marred by some ugly losses in the national championship and semifinals. But make no mistake: this is a team firmly entrenched among college football’s elite, one tier below the sport’s current 1A grouping of Alabama, Clemson, and Ohio State. ND is awesome because they have a well-rounded offense built around who they are generally able to recruit: offensive linemen and tight ends. The Fighting Irish have two five-star recruits on their roster, while Georgia, Ohio State, Alabama, and Clemson all are able to trot out ten-plus five-stars. The receivers aren’t studs, and Ian Book is a three-year starter who was going to Washington State before his ND offer, but Brian Kelly’s team fought its way to the College Football Playoff despite this perceived lack of perimeter talent utilizing a relatively run-heavy attack, allowing Book to pick his spots through the air.

Notre Dame isn’t every high school player’s cup of tea. It has rigorous academic standards, a somewhat remote location relative to where top players are coming from, and the school’s Catholicism might turn off some. So though I wouldn’t back the Irish to win a championship in the next five years, it’s hard to argue they’re not maximizing the hand they’ve been dealt.

Texas A&M: I’m sure Texas A&M would like to join the Georgia/Alabama grouping in the SEC after the school’s massive investment in its football program, but it’s achieved its #5 ranking this year based on a different formula. Of the six highest-rated recruits on A&M’s roster, three are defensive linemen and the top-rated player is an offensive tackle. Their best player (arguably) is a 225-pound running back, Isaiah Spiller, who was not among the top 100 players in his recruiting class. It’s not as pretty a product as Alabama or Florida might offer, but the Aggies showed this season they can pick off teams like Florida and the Gators potential All-American quarterback Kyle Trask with the roster currently constructed.

Wisconsin: The poster child for punching above the weight class that recruiting rankings say you should be in. The Badgers are down at 27th in the 247Sports Team Talent Composite, but have four ten-win seasons in five years under Paul Chyrst. That’s no small feat for a team that many recruits would prefer fourth among Big Ten teams. They’ve done it through developing offensive linemen like crazy and taking pressure off of perimeter players by running tailbacks like the powerful Jonathan Taylor twenty-plus times a game.

Washington: The Huskies have prioritized high-character players, termed “OKGs” (Our Kind of Guys) by former coach Chris Petersen, during their recent run of success. Defensive backs were critical to the team’s ascent, and rather than outsourcing their head coaching search and looking for an offensive guru when Petersen stepped down after last season, Washington promoted defensive coordinator Jimmy Lake, who produced five second-round NFL Draft DBs out of a mostly lightly-recruited crop.

What are the lessons we can take away from these squads?

Some teams I think could learn something from the aforementioned squads:

Texas: Of the ten highest rated recruits on Texas’ roster, none are offensive linemen. They’ve chased after that quarterback of the future and added offensive athletes, but have little to show for it during current QB Sam Ehlinger’s tenure despite never finishing lower than 8th in the end-of-season recruiting rankings in the last three years. In 2021, the Brockermeyer twins, five- and four-star offensive linemen from Fort Worth, left the state to go to Alabama. Of the ten top offensive and defensive line recruits from the Lone Star state this year, none were signed with the Longhorns even before Tom Herman’s firing. That’s unacceptable for a school with Texas’ level of resources.

Nebraska: Nebraska is still a bona fide college football giant. They have funding, a crazy fanbase, and lucked into a terrific head coach in Scott Frost, who is an alum. But their pipeline to Southern recruits from the school’s Big 12 days is all but gone. As Notre Dame has proved, it’s possible to win with recruits from the Midwest, the best of whom are often linemen. Meanwhile, the Cornhuskers have two Top 300 offensive or defensive linemen in their last four recruiting classes and are still vastly underperforming in the win column. Frost is an offensive wizard who had incredible success airing the ball out at Central Florida, but my guess is he’s trying to pivot a bit to tailor his offense to the strengths of the high school players coming out of Nebraska, Iowa, Minnesota, and the like.

There are, however, many more teams in college football than the ultra-prestigious Top 25, and those teams always need to look for a competitive advantage. Here’s how I would describe the recent strategies of the other 100ish programs:

Take chances on unproven but promising offensive-oriented head coaches or hire an overqualified defensive-minded HC. Run the spread if you have the horses and take calculated risks in roster-building and in-game decision making to try to punch above your weight class.

Success stories that fit the above include Memphis, Central Florida and, surprisingly, Iowa State. But this has been an awesome year for some contrarians.

Buffalo: The Bulls started 4-0 and didn’t win a game by less than 19 points in 2020 until they lost the MAC Championship to Ball State. Five years ago, they hired Lance Leipold out of Division III Wisconsin-Whitewater to head the team, and the results have been amazing. Upstate New York is a region largely devoid of talent, but this edition of UB features six offensive starters from New York or Canada supplementing star running back Jaret Patterson, who has rushed for a simply mind-boggling 920 yards in those four contests.

Coastal Carolina: Long live the Chanticleers. The program has been on a meteoric rise since the famous hire of TDAmeritrade’s finest Joe Moglia in 2012, and only joined the FBS in 2016. Coastal is 10-0 this year under Mogila’s handpicked successor, Jamey Chadwell, running an explosive spread-option attack that often keeps the ball on the ground. Because this story is just too good, Moglia identified Chadwell as a coach he wanted to add to his staff when he overheard the then-Charleston Southern coach talking to recruits in the stands while Moglia was reading a book pregame in 2015.

North Carolina: The cool contrarians aren’t only limited to the Group of Five, however. Last year, the Tar Heels made the collective college football world scratch its head when they brought back 69-year old Mack Brown to coach. Little did we know, Brown still had some juice left in him to hit the recruiting trail like a madman, immediately flipping quarterback Sam Howell from Florida State. UNC currently has the 13th-best recruiting class in the nation.

Some teams I think could learn something from the aforementioned squads:

Syracuse: It has to be painful for SU to watch Buffalo look so good behind an upstate New York backbone. At his introductory press conference in 2016, Dino Babers said, “Why can’t we go out and recruit the best players in the country? And it starts here in the state of New York.” It’s hard to say Babers has lived up to that statement, though. In the last four cycles, ‘Cuse has two of the five best players from each class in NY (two out of 20 players). The Orange have one top 500 offensive lineman and 0 top 500 running backs in that time. Its spread offense yielded a 1-10 record this year after a disappointing 5-7 campaign in 2019.

Michigan State: This is a pure prognostication: Michigan State will never win nine games under first-year coach Mel Tucker unless they run for 180 yards per contest. MSU is currently rushing for 95.2 and throwing about 30 times per game. When you think of the Spartans, you think of quality running backs like Javon Ringer, Le’Veon Bell, and Jeremy Langford. The state of Michigan does not produce enough talent to feed two teams (Michigan and MSU) that are trying to do the same thing. Under previous HC Mark Dantonio, Michigan State won double-digit games five times with some wear-you-down rushing offenses. For Sparty to reach near those heights again, they’ll need to hit the state of Michigan hard, which could yield the linemen necessary to allow them to recommit to the run game.

College football fans’ year-round fascination with filling out coaching staffs and recruiting classes must seem utterly bizarre to other sports observers, but it’s in those areas where a program will make or break down the line. The thinking about best practices to pursue has become quite stale, though, so it’s always refreshing to see people do an honest assessment of their own school’s quirks and tailor a unique vision accordingly. 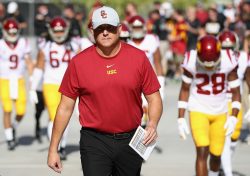