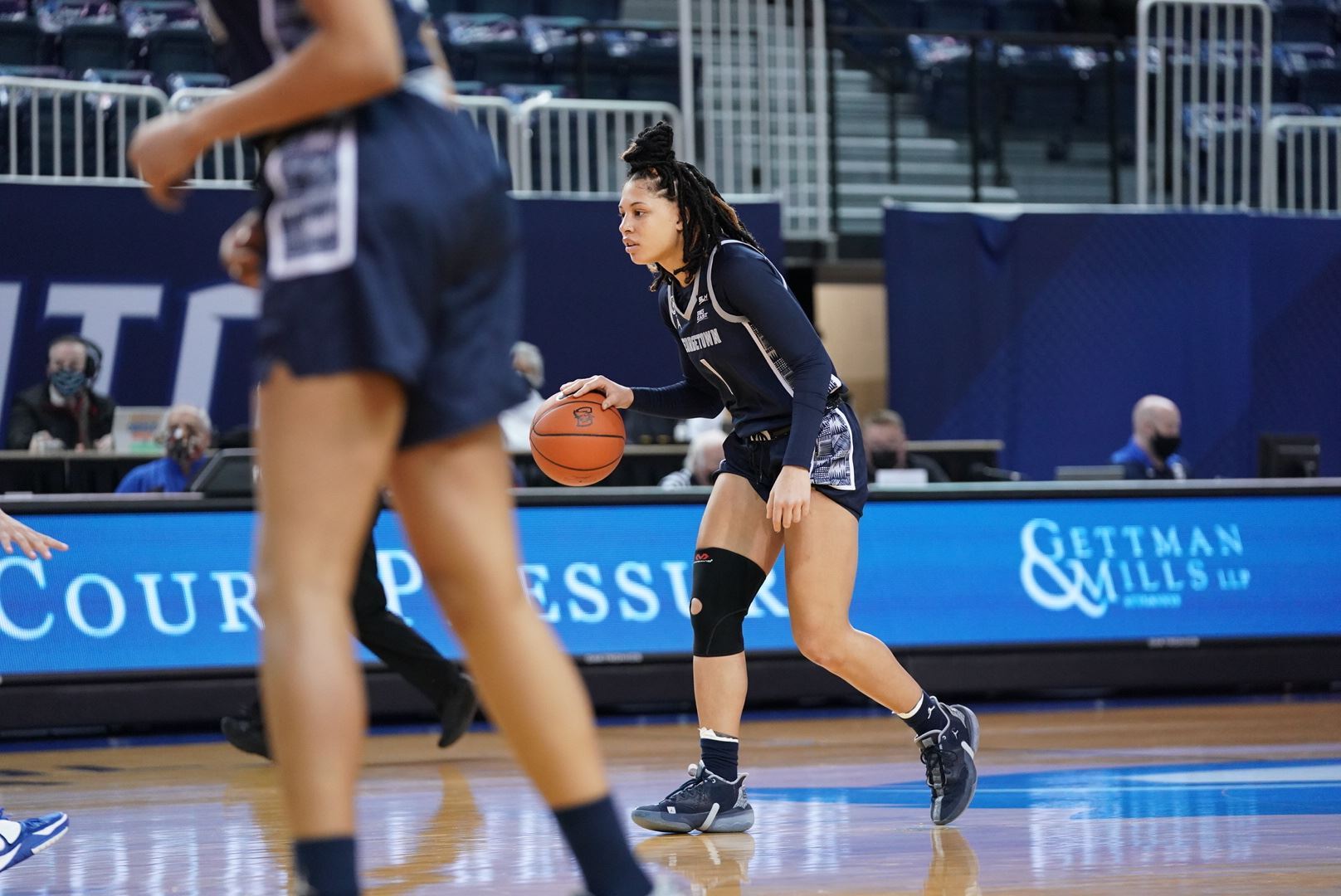 The Georgetown Hoyas women’s basketball team (1-10, 1-10 Big East) fell to the No. 2 Connecticut Huskies (16-1, 13-0 Big East) by a score of 64-40. After a close first quarter, the Huskies’ talent advantage came through as they pulled decisively ahead to claim the victory. Standout freshman guard Paige Bueckers continued her sterling season with 19 points and 9 assists, while junior guard Christyn Williams broke a recent slump with 19 points and 7 rebounds. For the Hoyas, their spirited effort was headlined by freshman guard Kelsey Ransom, who with 15 points, 4 rebounds, and 3 assists continued a promising first season of her own, undaunted by the top-ranked Huskies. Freshman guard Yasmin Ott added 8 points and graduate guard Milan Bolden-Morris scored 6 to help lead Georgetown’s effort.

The Hoyas came out strong against their vaunted Big East opponent and set a competitive tone. Ransom began the scoring with a transition bucket off a quick steal, but a three from Williams followed by two made free throws by junior forward Olivia Nelson-Ododa (who led the Huskies with 19 points when the two teams played earlier this season) gave Connecticut an early lead. Yet it was back and forth from then on, as Ransom along with Bolden-Morris spearheaded Georgetown’s offense, with all of Bolden-Morris’s 6 points coming in the first quarter. Together, the two combined for 10 of the Hoyas 12 first quarter points as they took advantage of the Huskies’ inability to get in sync early. In that first period, Connecticut shot a mere 4 for 12 from the field while committing 7 turnovers.

Even as Georgetown’s opportunism kept the game close, Connecticut was able to fall back on steady outside shooting from their key contributors. During an otherwise tough first quarter, Bueckers and Williams shot a combined 3 of 4 from deep, portending their key roles as the game went on. Meanwhile, the young Georgetown team’s offensive struggles this season continued, as the Hoyas closed the quarter on what was to be the first of several multi-minute scoring droughts.

The game started to get out of hand in the second quarter, as Georgetown was outscored 16-9 and relinquished the lead for good. Sophomore forward Graceann Bennett opened the quarter with an excellent play, snagging an offensive rebound and threading the needle past several defenders to secure the second chance points. Conversions like that proved few and far between, however, as the Hoyas struggled to execute while the Huskies found their poise, led by Bueckers and Williams.

In the closing sequence of the second quarter, with the Hoyas struggling amidst a 16-2 Connecticut run, Coach Howard’s squad struck back. Ransom made a tough play, finishing through contact on a drive inside and drawing a foul. A Connecticut turnover gave Georgetown the final possession, and although they came up empty, Ransom’s continued scoring punch combined with the reclassification of a Connecticut three as a two left the No. 2 team in the country only up by 8 at halftime, 29-21.

As the third quarter wore on, however, the Huskies continued to surge ahead, winning the period 18-7 and building a 19 point lead. Their dynamic offense was able to score at all levels, while the Hoyas simply could not keep up. Even as Ransom personified their determination, the lack of another consistent offensive presence prevented Georgetown from cutting into the deficit. Ott, who made several eye-catching plays throughout the night (including two made threes), was the only Hoya other than Ransom to record points in the third.

Bueckers continued to be the center of gravity, always able to provide a response when her team needed. In one notable third quarter sequence, Bueckers took a tough foul from junior forward Jillian Archer and appeared to be moving somewhat gingerly. Yet on the succeeding possession, she nonetheless broke down the defense with a striking midrange jumper. Beyond her 19 points (actually below her season average), Bueckers’s ability as an initiator was also on display, dishing out 9 assists in the winning effort. Playing well into the fourth quarter, Bueckers continued to show the challenge she will face for Big East teams for the foreseeable future.

“Paige is a nightmare. Paige is going to be a nightmare for the next three years,” said Howard. “I’m saying three because I’m hoping she won’t use that extra year that the NCAA gave back. I’m praying that she’s going to be the number one draft pick and she’ll be out of there.”

Nonetheless, matching up against Connecticut highlights where Georgetown has progressed this season and the deficits that remain. Ransom’s energetic 15 point effort shows one bright spot, and the team’s all around fight was another encouraging sign.

“For Kelsey, she believes she can play against anyone. You could put the Lakers out there and she’s that kind of kid that plays with an edge,” said Howard. “She’s the motor. I’m proud of her, every day she wants to get better, she’s working at it, she’s learning. They’re all learning as they go.”

Both teams made some lineup changes in the fourth quarter, with new faces getting minutes in the closing sequences. Freshman guard Teaghan Flaherty and sophomore guard Taylia Stimpson were among those who played out the final period. Even with the adjustments, the Huskies continued to show the decisive advantage that makes them one of the nation’s leading programs. Across all statistical categories, they secured an advantage, winning on the boards by a margin of 37 to 26 while committing only 16 turnovers to the Hoyas’ 21. Connecticut also shot 44% overall, including 32% from three, while the Hoyas struggled to the tune of 31% (a mere 25% from three).

“I’m always really proud of these young ladies and how they fight. I’ve been with teams that play UConn before and I’ve seen teams that lay down but this team for two games has fought,” reflected Howard. “UConn is just so good at every position and that’s what we have to fill out, we have to fill out a little more scoring. I don’t have to fill out the effort, because we have the effort, but we have to fill out that scoring.”The Hoyas will look to continue their development and add to the win column against Creighton (4-8, 3-5 Big East) on Monday. Tip is scheduled for 4:00 p.m. EST at McDonough Arena, and the game will be broadcasted on the Big East Digital Network, streaming on FloHoops. For continued coverage of women’s basketball and all Georgetown sports, follow @GUVoiceSports on Twitter. 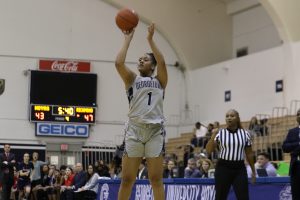 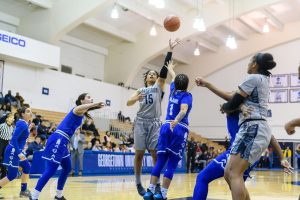 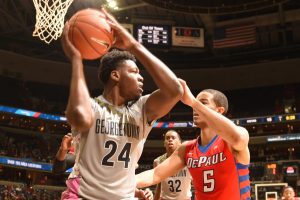