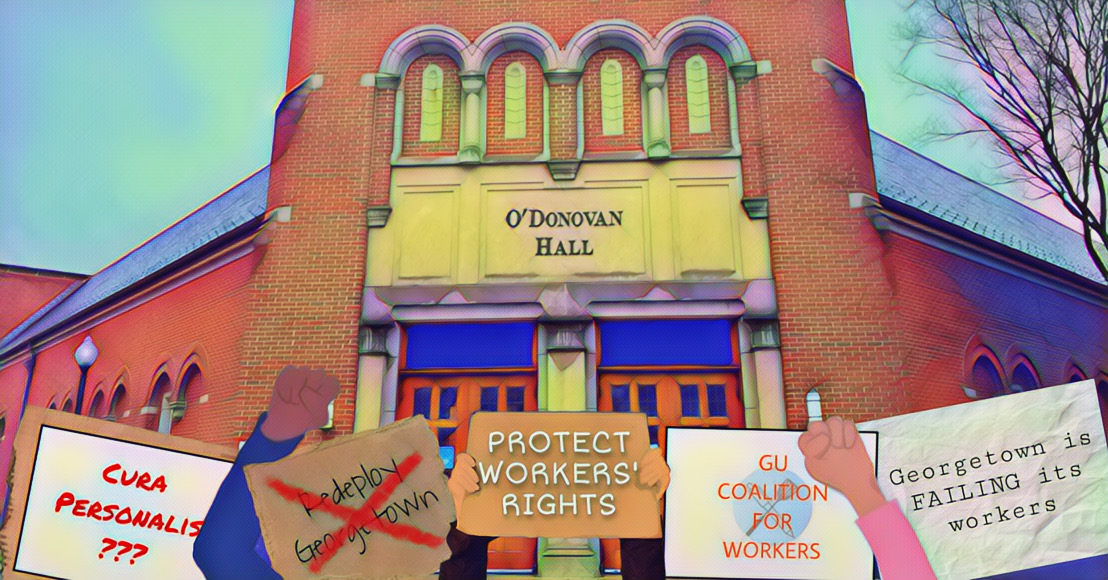 Few groups have been hit harder during the COVID-19 pandemic than essential workers.

At Georgetown, where workers have been long underappreciated by administration and students alike, employees have put their health on the line to serve the greater university. On a daily basis, they risk exposure to a deadly virus to prepare food, check badges, and keep students safe, all while receiving little to no support for themselves. And that risk is not equally shared. Despite being a majority white institution with an overwhelmingly white administration, Georgetown hires an in-person workforce composed primarily of people of color—a microcosm exemplifying the disproportionate burdens placed upon BIPOC workers even before the pandemic.

When the university adopted the Just Employment Policy in 2005 after a student-led hunger strike, it committed to guaranteeing dignity, a living wage, and appropriate grievance procedures for all employees. Now, as detailed by the recent statement released by the newly-founded  Coalition for Workers’ Rights, the university is in breach of its own contract to treat workers with dignity. The Editorial Board believes that Georgetown must take immediate action to address the coalition’s each and every demand.

Composed of undergraduate students, graduate workers, and staff at Georgetown, the coalition calls on the university to improve its treatment of employees, citing inequitable employment practices towards both those hired directly by the university and those indirectly hired through Aramark.

Thus far, the administration has responded only by acknowledging their concerns without initiating any dialogue with the workers themselves. Instead of hoping a public relations non-response will quell widespread frustrations, the university needs to commit itself to tangible actions and respond to each demand put forth by the coalition, as outlined below. The university’s lack of action does not support workers, and it is not leadership.

First, if Georgetown wishes to protect the health of its employees and show any respect for workers, the university must end its Redeploy Georgetown program. The Redeploy program, which became mandatory for some workers in spring 2021, reassigns selected university employees into public health and safety positions they were never hired for and takes away health benefits from those who refuse to be repositioned. These positions, which encompass “visitor registration, wellness screening and perimeter access support,” have put employees in the direct line of exposure to COVID-19, especially those who must escort students who have tested positive for the virus to quarantine locations.

On top of forcing workers to decide between their livelihood and their health during a pandemic, Redeploy Georgetown disproportionately harms Black and female workers. Roughly 59 percent of those in the program are employees of color, especially Black women, continuing the university’s history of exploiting the labor of Black and Indigenous people and relying on the undercompensated work of people of color.

Second, it is imperative that Georgetown provide assistance for workers hired through Aramark, the university’s dining contractor. Despite being subject to the living wage requirements of the Just Employment Policy, Aramark has slashed working hours and provided meager benefits for its workers, many of whom have faced significant financial and emotional hardship during COVID-19.

The company’s pay and the benefits from Ararmark’s Employee Assistance Program were not enough to support Stacey Walton, an Aramark employee who works at Leo O’Donovan Dining Hall. When Walton’s story became public, undergraduate students raised over $17,000 for Walton through a GoFundMe, citing the food and housing insecurity she faces. Georgetown is failing its employees if the students, many of whom are facing financial strain of their own, are the only ones doing anything to support struggling workers.

With 1,000 students on campus for the spring semester, all campus workers are at a higher risk of getting sick, but Aramark employees working in spaces like Leo’s are particularly vulnerable, as many have reported students congregating en masse in the dining hall, not following social distancing guidelines, and failing to appropriately wear masks while picking up food. It is critical that Georgetown better protect Aramark workers by strictly enforcing compliance to campus safety protocols at the bare minimum.

Along with making the livelihoods of its workers an active priority, Georgetown needs to increase transparency in its decision-making processes regarding workers and include their perspective in all conversations about reopening. As the presence of students on campus inherently puts the health of workers at risk, employees must be consulted when the university develops plans to bring students back to Georgetown, especially in regard to the Summer Hilltop Immersion program and fall 2021. The decisions made by Georgetown in the coming months will have a disproportionate impact on the university’s workers compared to the administrators making those calls. The least the university administration can do is to let workers and their interests be represented.

Going forward, Georgetown must make sure its employees never feel this unheard again. To even begin to accomplish this, there must be a workers’ representative who is a voting member of the university’s Board of Directors. This will give Georgetown’s workers a place at the table with those in power at the university, ensuring their perspective will be included in larger decisions impacting the entire Georgetown community. Institutional change is required to support those who carry this institution on their backs, and the administration must take the steps necessary to amplify the voices and demands of workers.

Georgetown students, too, have to do more to respect workers on campus. The mere fact that a number of dining hall employees and Redeploy health screeners have reported feeling unsafe around unmasked or obnoxiously casual students is appalling and wholly unacceptable. It is a disservice to not only the workers, but also to their families and communities. The onus is on students to wrap their minds around the power that they wield in relation to those that cook for them, clean up after them, and keep them safe during a pandemic.

Undeniably, students changing their behaviors needs to be the first step in supporting workers. Yet students also must understand that it is their responsibility to use the tools they have to advocate to the administration. The employees themselves, for fear of job security, cannot and should not be the only ones expected to advocate for their well-being—students must leverage their platforms, their bodies, and their tuition dollars to fight for workers. The 2005 hunger strike led to the most tangible worker reform in university history with the Just Employment Policy. In 2021, social media posts are not enough; students should protest for workers’ rights the same way they protest for student groups on campus: sit-ins, hunger strikes, petitions, and more demanding forms of advocacy.

It is important to note that community organizing and raising awareness through social media posts are just small parts of the overall work needed to build student-worker solidarity. Supporting workers will require multilateral support, whether it be through mutual aid funds for employees, pressure campaigns, or direct action.

As students, we must educate ourselves thoroughly on the issues that campus workers experience on a daily basis. It is unconscionable that a full-time employee like Walton had to resort to GoFundMe in order to cover her housing and food costs after draconian pay cuts in violation of the Just Employment Policy. Her story is one of many among workers at this university, and knowing the extent of the injustices facing each and every worker is a crucial step in being effective allies to our fellow community members.

For too long, student issues have been treated as separate from workers’ issues. By understanding that students, administrators, and workers all inhabit the same campus and that Georgetown employees deserve the same support that they give this university, we can work to bridge the divide between students and workers, presenting a united front that President John DeGioia and his administrators will be forced to pay attention to. Georgetown’s workers must be listened to, their demands accounted for, and their livelihoods respected. 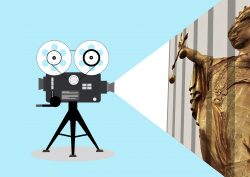