Similar to many other D.C. establishments, Martin’s Tavern has a host of public health guidelines aiming to prevent the spread of COVID-19 while offering a semi-regular dining experience to patrons, among them an hour-and-a-half time limit imposed on meals. Riggs, a Black woman, wrote in a Facebook post that staff at the restaurant pressured her to leave early, under the guise of enforcing the time limit.

“They love our money; they love Black dollars,” Riggs said in an interview with the Voice. “That’s what’s so weird about this whole dynamic to me. People are more than willing to accept those Black dollars but not willing to extend equal respect.”

Riggs arrived before the dinner rush, ordered food, and invited a friend to join her later. Under an hour into the meal, according to Riggs, she noticed two older white women talking to her waiter and pointing to her table. Shortly thereafter, the waiter asked when her friend would arrive, and Riggs began to feel pressured out of the restaurant. When her friend joined, the waiter sent over the restaurant manager, who informed her that they had to leave. The time limit policy was not enforced of their white counterparts at the restaurant, according to Riggs.

“A woman at the table next to me said, ‘Excuse me, but if anybody should be asked to leave, it’s us. We’ve been here way longer than she has, but no one said anything to us,’” Riggs said. “Even after that, [the manager] turned back around and just continued.” She believed the manager fixated on having her leave the restaurant and said the parties at the tables next to her were never admonished about the time limit.

“In the midst of this awful thing that was happening to me, it made my spirit glow when that young lady stood up as a perfect ally in the moment,” Riggs continued. “It gave credibility to my position, which was important.”

When Riggs returned to her friend’s car parked near the restaurant a few hours later, the two white women still sat at her table. At this point, she felt obliged to share her story on social media and promptly received similar accounts detailing racial discrimination at the restaurant and other D.C. establishments.

Following Riggs’ experience of racial discrimination at Martin’s Tavern, leading student officers of Georgetown’s Philodemic Society began to reconsider the club’s longstanding tradition of gathering at the restaurant after debates.

The Philodemic Society, Georgetown’s oldest student organization, has had a relationship with the restaurant for generations. Before classes went virtual, members of the club would flock to Martin’s to eat French fries and French onion soup and continue socializing immediately after their weekly debates.

“It’s kind of a way of continuing the dialogue, hanging out and getting to know people,” explained Philodemic Society President Aida Ross (SFS ‘22), “[Martin’s staff] know that Thursdays around 10:15 to 10:30, they’re just going to get a bunch of Philodemicians in their restaurant.”

Neither Ross nor any of the other Philodemic officers have been in communication with the restaurant since in-person club meetings came to a halt in March of 2020.Club officers shifted their attention back to Martin’s when Riggs’s Facebook post describing her experience at the restaurant was shared throughout the Georgetown community. After another member of the organization shared an Instagram thread of the post with Ross, she and other club members collectively decided to end their relationship with the restaurant.

“Yes, it is a tradition and, yes, it is something that has had a lot of importance for us,” Ross said, “But at the same time we pride ourselves in trying to actually create a better environment and a more welcoming, anti-racist environment, so we don’t see how we can continue a relationship with a with a restaurant that is actively racist.”

On March 11, the Philodemic Society released a statement via its mailing list announcing the termination of the club’s relationship with Martin’s. “We cannot continue to build a positive, inclusive culture by patronizing a space that exhibits racist and anti-Black treatment towards its customers,” the statement explains. “We, the Philodemic Society Officer Corps, also reaffirm our commitment to supporting members of our community, especially Black students and students of color who face discrimination of any form.”

After local media coverage and community backlash, Riggs arranged a meeting with William Martin, the restaurant owner, and recounted having a constructive conversation about how to address the incident and improve the restaurant’s environment in the future. Riggs asked for diversity and inclusion training for staff and management, business relationships with Black-owned vendors, contributions to a Black student college fund, management training and job placement for Howard University students studying hospitality, and to fire the staff involved in discrimination towards her.

Though she said Martin seemed amenable during the conversation, Riggs added, “I don’t want this to be something that he just agreed to to get the heat off of him and his business.” When she sent her list of requests to Martin, she received a response from his lawyers.

The restaurant could not be reached for comment as to their agreement to the demands. After meeting with Riggs, the owner shared a post apologizing for the incident and said they discussed solutions but did not provide further detail.

The Philodemic Society’s decision to cut ties with the restaurant mirrors the club leadership’s broader work on making Philodemic’s culture more welcoming and debate topics more inclusive. Club officers hope that by changing this tradition, the Philodemic Society will take a step towards promoting a more supportive and anti-racist community.

“Traditions can be changed, traditions can keep up with the time, and we want to make sure that we continue the conversation, the dialogue, the social aspect that happens between members, just in another place that’s more comfortable,” Ross added. 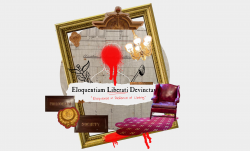 How the Philodemic Room portraits came down, and what’s next