The GUSA Senate passed a resolution in support of reevaluating the tenure rejection of professor Mubbashir Rizvi, a Georgetown anthropology professor, at their meeting on April 25. The resolution follows a student petition with 661 signatures supporting the reevaluation at the time of publication.

The petition cites incidents of racism and Islamophobia against Rizvi and argues that the professor’s tenure decision was based on university discrimination.  It includes a combination of favorable student and faculty testimonies, his CV, and several pieces of Rizvi’s peer-reviewed scholarship as qualifications for tenure.

Rizvi’s tenure was reportedly denied because the university did not think his teaching performance was satisfactory or think his research was sustainable. The petition points out, however, his student evaluation average of 4.23 out of 5 during his third-year review and favorable accounts of his research from professors at Georgetown and universities around the country.

The petition argues that Rizvi’s tenure review process was filled with procedural violations. For instance, it claims that Rizvi was pressured into accepting the position of director of undergraduate studies in addition to teaching a full course load. It also reports instances of discrimination Rizvi faced from the anthropology department, such as asking him to teach courses on terrorism despite his focus on Muslim diaspora communities.

The GUSA resolution reiterates the concerns of the petition, calling for a transparent reevaluation of Rizvi’s tenure.

Speaker Melanie Cruz-Morales (COL ’22) spoke in favor of the bill, condemning the university’s alleged discriminatory actions. “I see a lot of things that are obviously racially charged in his experiences, like when Dr. Rizvi had to change the name of one of his courses to take out the reference to the Muslim world,” Cruz-Morales said. “It is important to acknowledge how professors are treated differently based on what level they are in their careers.”

The resolution passed unanimously. There were no abstentions.

Additionally, the Senate passed a resolution to change the student code of conduct to reduce sanctions for marijuana use, increase the conversion rate of fines to work sanction hours, and progressively eliminate the use of fines in the disciplinary process.

The SAO has also supported increases in the rate of conversion for work sanction hours. Instead of paying back a fine incurred for a code of conduct violation, students can complete university-supervised work to cover the fine. The current rate for work sanctions is $10 per hour, which SAO argues should be increased to $15 per hour to meet the D.C. minimum wage. The resolution supports such a change.

Finally, the resolution argues that Georgetown should move away from using fines in its punishments entirely. It cites the Office of Student Conduct’s decision to discontinue the use of student fines for conduct violations due to the financial impacts of the COVID-19 pandemic.

Sen. Leo Rassieur (COL ’23) introduced the resolution, arguing that the current code of conduct policies disproportionately impact low-income students. “This summer is a particularly important time to review the code of conduct because it is a transition from a COVID-19 era to a ‘normal’ era,” he said.

The resolution passed unanimously. There were no abstentions.

The Senate will hold their next meeting on May 2 at 6 p.m. EST over Zoom. 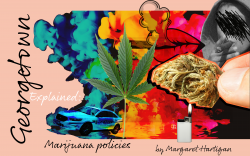