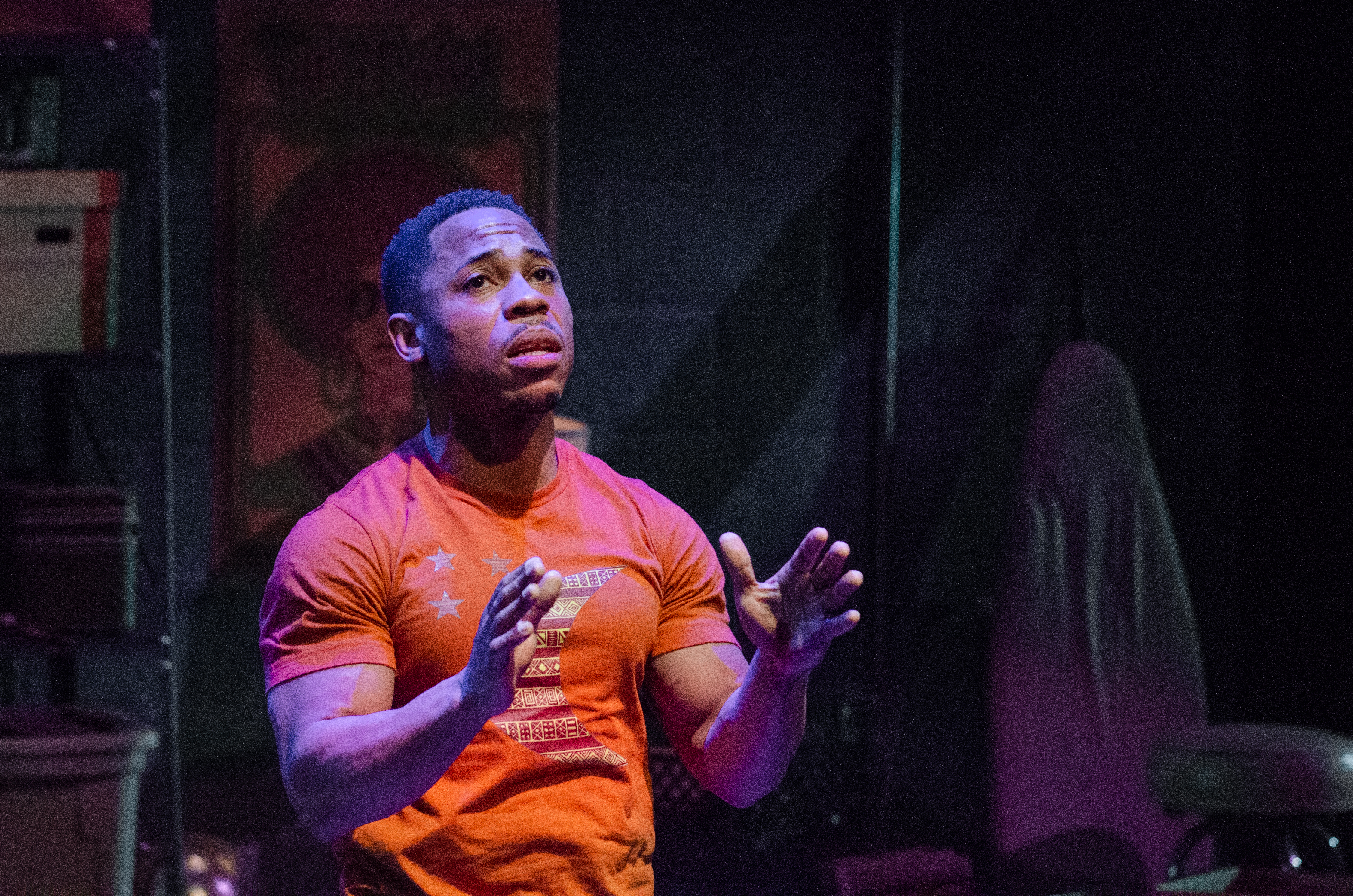 There is a certain beauty in watching a show and thinking, “this could have been done so poorly.”

It means not just that all the right choices were made, but also that they each felt like a choice, that nothing about the beauty before you was left to chance. Each swelling note, heartfelt mimic, and wide-angle shot in Round House Theatre’s virtual production of Colman Domingo’s autobiographical A Boy and his Soul feels as though it has been freshly plucked off a vine and delivered to the audience on a platter. The production is available as part of Round House’s reimagined virtual season on Vimeo from March 22 through April 18. Filmed over the course of two days in the theater, the one-man show reflecting on the experience of growing up as a Black, queer man in 1980s West Philadelphia is honest, meaningful yet playful theater. Simply put, it is a joy.

The star of the production is Jay, played by the fantastically effusive Ro Boddie. Jay talks the audience through his life, using a series of soul records and songs to bring his experiences with family, music, love, and loss to life. His continued return to a box of records, distressingly left abandoned in the basement of his family’s old home, ties together a series of scenes from his childhood and young adult life. What could easily feel like disjointed jump cuts are instead expertly linked by Boddie’s strong sense of character, with sound designer Matthew Nielson’s tracks weaving the whole runtime into a single feeling of yes.

To say the show is a delight is to say the same of Boddie’s performance. He brings a confidently deliberative quality to the character, drawing the audience in with each scene, even through the barrier of the screen. To Jay, who is normally played by Domingo himself, Boddie brings an understanding equal to what would be expected of a playwright. Though he keeps the show lighter, the gentle brush over the periods of loss and anxiety also seems characteristic. And when Boddie is up, he is up. The music-video-esque scenes where he croons the music of his childhood are guaranteed to bring a smile, and his dancing along to his own voice shows the earnest, nerdy kid his character grew from.

Though Boddie is the only actor, Jay is far from the only character. The character’s past is told through scenes with his mother, stepfather, sister, brother, and aunt, all of which Boddie plays and has developed a distinct character for. Light caricatures of loved ones, these personalities feel wonderfully filtered through Jay’s perspective as Boddie brings them to the stage. Connections between the characters are all the more evident when the mischievous glint in Jay’s eye stays put during his mother’s scolding or as his stepfather devours chicken.

The show is gracious enough to give the audience a small primer on soul and R&B music, naming Marvin Gaye, Earth Wind & Fire, Aretha Franklin, and the Isley Brothers. The light education does not feel like lecturing though—Jay’s sheer enthusiasm for the topic keeps the audience engrossed in the story, and his rifling through a tonnage of records is a delightful visual. You certainly do not have to be in love with soul to see the show. It will captivate you regardless.

Luckily for Nielson, the show is a sound designer’s dream. Scripted inclusions of songs as plot points are supplemented with a journey through some of the best songs of the decades. Nielsen mixes classic soul, disco, and R&B to create the soundtrack to Jay’s early life, equally comforting and compelling. It is often hard to realize when the music, which is as much a part of the surroundings as the mustard yellow armchair, turns off, but it leaves a hole in the space each time it does.

Perhaps the most exciting part of the filming are the moments when the camera gets close enough to Boddie to see the lines on his face or the words on a record. These close-ups, an appreciated addition to pandemic-era theatre, is the chance to see scenic designer Paige Hathaway’s work up close. The onstage basement, which over the course of the play becomes a train, a concert hall, a hospital, and several clubs through Harold Burgess’s expert lighting and Boddie’s earnest descriptions, becomes a stand-in for Jay’s family’s whole house, full of warmth and family, even when Jay is alone in the room. Boddie’s childish energy and love for the place is not hard to understand, with Hathaway’s realistically scattered boxes, low piano, and distinctly 70s poster of a woman with gold bangles hanging in front of her afro.

The production elements as a whole are refreshingly simple. A Boy and his Soul avoided the allure of doing more just because you can, keeping the behind the scenes functions as honest as the performance. This was especially notable given that the show was filmed over two days, and very well could have felt like a highly-edited TV spot. Filming and editing forgoes attempts to redefine what theater should be, and simply captures what it is. With a supportive crew for an audience, while the show is not theater as we have known it, it gets encouragingly close.

If there are weak points in the production, they unfortunately open and close it. The recording begins with a mention of the COVID-19 pandemic and shots of Boddie walking into the theater before the show and receiving his rapid test. While the acknowledgement of the pandemic has become almost requisite in art produced over the last year, the introduction of it before the story even began felt like an apology the show did not need. It does not help that the show has a slower start, leaving the audience to ruminate on the outside world for a touch longer than palatable.

Boddie’s handsomely real performance falters only in the final ten minutes, when a slightly gimmicky script traps him in a single emotional timbre. Though throughout the play the audience members may feel as if they are watching a glorified monologue, it is normally an acceptable, if not thrilling, revelation. However, in the final scene, suddenly something feels off, as a new and unexplainable level of drama enters Boddie’s persona.

Though the show’s weaker end is lamentable, the overarching experience remains stunningly earnest. The unparalleled levels of understated honesty about being a Black gay man in Philidelphia combined with the exuberance of a love for music and family make for a show that is the best response you’ll ever hear to “take an hour and tell me your life story.”