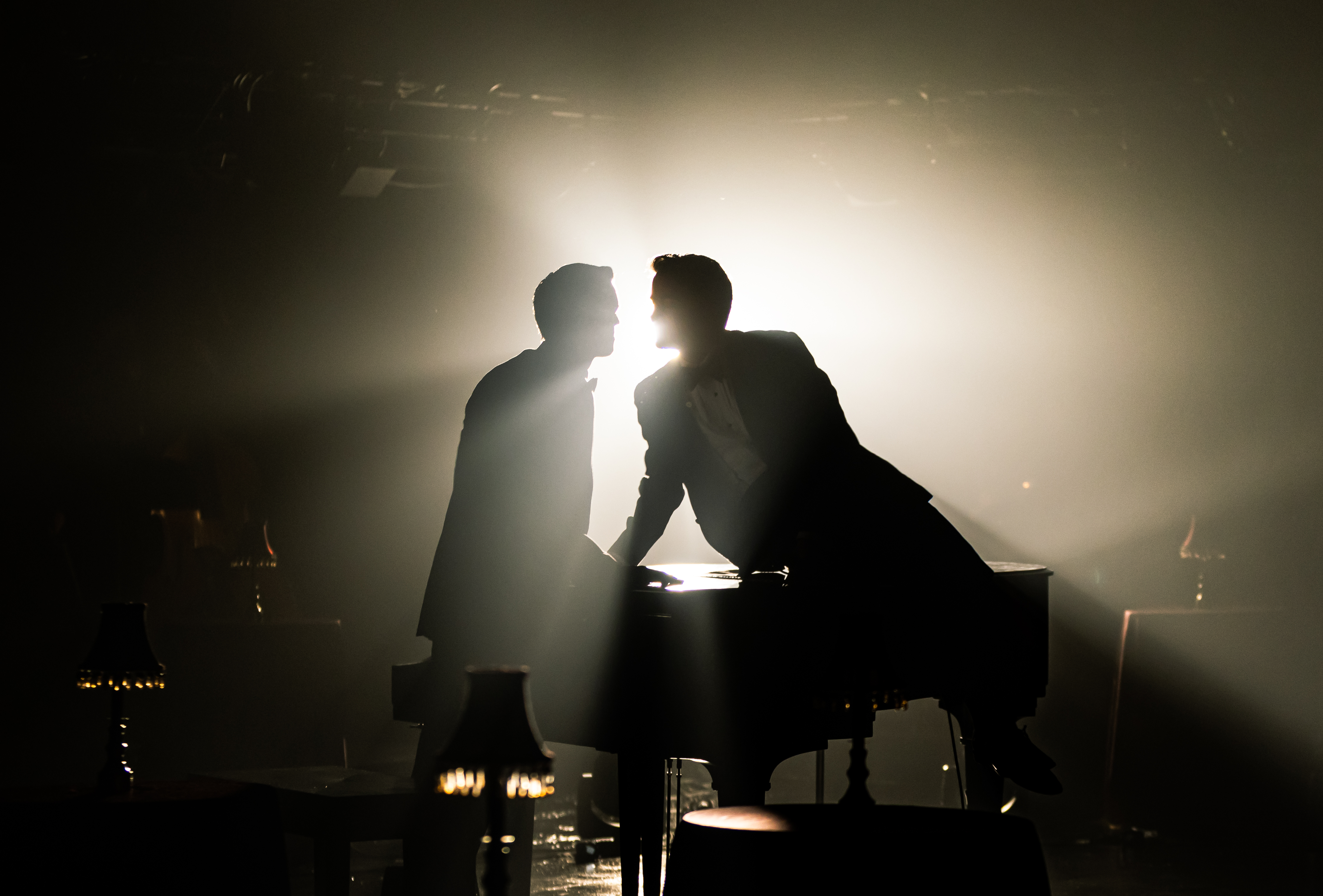 Christian Douglas as Arthur and Sam Bolen as Trevor in Midnight at the Never Get. Photo by Christopher Mueller, courtesy of Signature Theatre

The premise is deceptively simple. It is a cabaret show about the fabulous and dramatic lives of a songwriter and a performer at the close of the golden age of Broadway. The performer awaits his lost love in a shadowy, gilded nightclub. The fact that the love is also a man keeps the “theater about the theater” trope from going stale. The audience should sit back and expect entertainment, interaction, strife, and ultimately, persevering love.

Of course, that is not what they will get.

Instead of the comforting old-timey story it promises, Signature Theatre’s production of Midnight at the Never Get jolts the audience from its chosen theater-at-home watch spot. The Tony-winning musical from Mark Sonnenblick disarms our preconceived notions of what it means to love and be loved, and how close we can hold that love to our hearts. A tragically earnest performance by Sam Bolen, one of the concievers of the show as well as its original star, brings the nightclub into viewers’ homes in a performance that cannot be paused. Though Midnight at the Never Get was undoubtedly built for the stage—and the production will definitely leave audiences missing live theater like never before—the end of the show will have viewers thankful for their solitude as they can weep, scream, or do both in privacy.

“Mark Sonnenblick has written a musical that is romantic and heartbreaking,” Associate Artistic Director Matthew Gardiner wrote. “It’s a story about the tectonic power of a love affair and the trace it leaves behind, for better or worse.”

The show follows New York City crooner Trevor, who creates a mental representation of his love and songwriter, Arthur (Christian Douglas). The two meet and begin to date and collaborate, finding success in a small cabaret show in an illegal gay bar called the Never Get. As the show continues, they face rejection from records and clubs, fight over what it means to make art that is queer, to be an aritst that is queer, to be queer itself, and, ultimately, separate. Their story is recounted by Trevor to an imagined audience in a renovated Never Get. All the while, Douglas, shrouded in darkness, plays at the piano, occasionally pulled into the story as Trevor reenacts the past.

The true theme of the show—the instability of memory—creeps up on the audience much like one imagines forgetfulness might. The show opens with a Bolen’s powerful rendition of “The Mercy of Love,” a number that, if it came at the end of the show, would render any viewer speechless. He quickly moves into a playful mood, embracing his role as a gay man from Idaho with his first shot at the spotlight. Though the opening scenes can feel campy and overplayed, Bolen is quickly forgiven for this as Trevor’s insecurities are revealed.

Trevor and Arthur’s first moments are truly sweet to watch and, for me as a queer person, refreshingly unfocused on coming out. Bolen and Douglas have innocent, excited chemistry and they expertly deliver the banter that forms the basis of their relationship. The pair’s first true duet in “The Bells Keep Ringing” is pure serotonin. In fact, the best moments of the show are when the two share the stage, though the plot keeps these instances rare.

The show’s twist comes suddenly, and not entirely agiley. A bright light shines behind Bolen as he repetitively pleads “Not yet.” The clear iconography of death is out of place in the so-far-upbeat show. Something in either the script or performance feels off; both too much and too little has been given away.

By the middle of the show, Trevor and Arthur have secured an act at the Never Get (they go on at midnight, giving Midnight at the Never Get its name). Their cabaret performances within the cabaret-staged show are nothing short of glorious; a number mocking the police surveillance of LGBTQ+ communities as Trevor pretends to date a cop especially succeeds. The chance to see Douglas in performance mode, after serving as an accessory to Bolen, is particularly delightful. Trevor and Arthur’s identities as gay men become increasingly salient in the build-up to Stonewall. As the Never Get is raided, Arthur is asked to change the pronouns in his love songs, and Trevor becomes progressively more frustrated with how much of his life he must hide. Though his memory seems to be failing, he recounts his many arguments with Arthur over whether and how they should get involved in the movement for queer liberation.

Though the show recounts a fictional 1969 argument, the anger and conviction from Bolen and Douglas feels fresh—and still applicable. Arthur insists he will not change the words to his songs, even if it will help the two get further in the industry. Trevor is upset over more systemic issues, which he discusses with their friend, simply called “John.” Though both are undoubtedly proud of their identity, Arthur shies away from any form of protest or demonstration, insisting that the activists who disturb shows and eventually participate in Stonewall are not advocating for gay rights the “right way,” and are off-putting, unsophisticated and divisive. Trevor, it seems, simply thinks the activists are right.

While the extended political debate takes the audience slightly away from the main plot, especially as Bolen and Douglas drop some of their mannerisms and patterns of interaction, it earns its place in the show. Not only is the outburst from Douglas perhaps his best moment, but the debate reminds the audience, especially anyone in the LGBTQ+ community, of the struggle to be presentable to those in power. Even now, queer people like myself, especially queer youth, must often choose between being their fully expressive self and being taken seriously or seen as normal. Though it is clear that Trevor’s pride lays in his identity and Arthur’s in their love, the production leaves the question of how to be queer and of how to be proud open-ended.

The men’s political split foretells the end of their relationship. One of the most beautiful songs in the show, “I Rely on You,” features Trevor singing about his dependence on Arthur as Arthur tells him he’s moving to California. Though the two keep dating, the distance grows, and eventually Trevor reveals Arthur has left him and married a woman. Trevor’s lapsing memory and the occasional bright light come together by the close of the show for an ending that is poignantly unsatisfying.

Bolen’s strongest moment comes in the last song, “A Little Less to Love,” and the audience’s questions are answered in an effective, if not heavy-handed, fashion. Though the final scene is powerful in its own right and well executed by the actors, the overdone lead ups throughout the show and highly expository script bring the audience out of a natural rhythm. Still, the sheer power of the moment and Bolen’s heartbreaking uncertainty help the scene channel all the emotion of the show into a romantic desperation that is sure to reach the audience.

Signature’s fairly minimal staging allows Bolen and Douglas to stand out, though the set design and Ryan Hickey’s sound design certainly helps bring the 1960s to the 2021 screen. Though the filming of the show means it occasionally feels like a movie, complete with rolling credits, fades, and camera angles that never show the whole set, much of the close-up action helps the show redefine where it is, something necessary for a filmed performance. Rather than taking place in a raucous nightclub, as it was designed to be, and slowly transforming, the entire show feels as though it is unfolding in Trevor’s head, reinforcing the themes of memory and recreation. The beauty of the production will not fade come end of June; you will wish you could stream it again and again.

Signature’s Midnight at the Never Get is love in its purest sense. The show is all about the thrill and doubt and politics and complications and pain that defines that love, and chasing it anyway. Midnight will haunt your relationships and memories, and you will be better for it.

Midnight at the Never Get is available to stream until June 21 in HD on Marquee TV. Single tickets are available for $35 and subscriptions to the full season for $200 at SigTheatre.org.