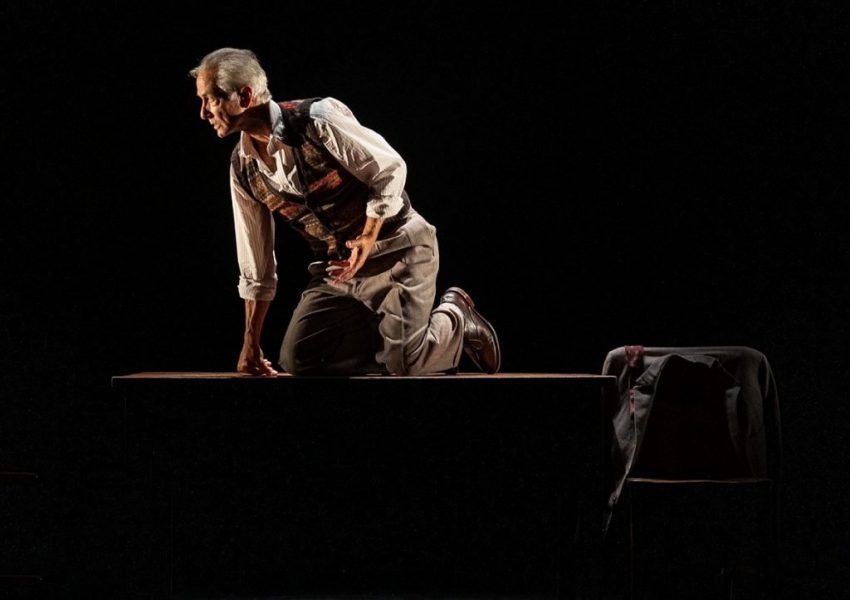 With just one actor (David Strathairn) and stark scenery, Remember This: The Lesson of Jan Karski harnesses the power of storytelling to convey a message that transcends time and the confines of a stage. The curtain opens to an austere set, inviting audience members to encounter the story with their own experiences in mind. In viewing the production without the distraction of auxiliary props, viewers are able to concentrate on the profound reflections of Karski’s legacy. The show incorporates movement and lighting sequences that enhance the actor’s narration as he conducts audience members through the encounters of the protagonist. Remember This is not a show that is meant to be grappled with during its ninety-minute run time, but rather, the play lays a foundation for audiences to reckon with the question of what it means to bear witness to injustice in their own lives.

Strathairn depicts Karski’s profound life experiences and moral compass through this one-man show, put on at the Shakespeare Theatre Company in collaboration with Georgetown’s Laboratory for Global Performance and Politics (The Lab). The solo performance effectively conveys Karski’s deep sense of individual responsibility. In addition to demonstrating the man’s virtuous individuality, Strathairn’s keen changes in body language and voice expertly depict the dialogue necessary to understand the story. He embodies the various characters present in the story all the while remaining committed to his representation of the protagonist. The actor utilizes the power of the script to transport the audience through Karski’s footsteps and memories. His ability to centralize this message utilizing few props and accompaniments is impressive and crucial to underscoring the story’s significance.

To start, the production highlights Karski’s upbringing in Poland and his sense of commitment to his country, and it continues through his witness and experience of the atrocities in Europe during World War II as well as his post-war responsibilities of bearing this knowledge. A self-described “insignificant little man,” Karski’s story reaches across the world and is far from insignificant. A Polish resistance fighter during World War II, he rose to international prominence after reporting on the Nazi attrocities taking place in Europe. Some of the eye-witness information Karski smuggled out of Poland formed the basis for some of the earliest accounts of the Holocaust. He would later be categorized as a hero for his virtuoso-like memory, humility, and honesty about the horrors to which he bore witness. Following the war, Karski emigrated to the United States, where he earned a PhD from Georgetown and would go on to teach in the Government department for four decades.

Although Karski’s life story is deeply ingrained in Georgetown, Washington, D.C., and communities around the world, his significance is often unknown beyond a silhouette of a World War II hero. Derek Goldman, Chair of the Department of Performing Arts and Co-founding Director of The Lab, found inspiration for the production during the university’s centennial celebration of Karski’s life in 2014. After he was approached by colleagues suggesting he explore this story in a theatrical context, Goldman recruited co-writer Clark Young and Strathairn to retell Karski’s story as a play. The three remain the core collaborators working on the production today.

In 2014, Goldman and Young travelled to Warsaw, Poland, where they retraced some of Karski’s steps. Young recalls that this trip opened his eyes to the ways in which the country was still dealing with this history in a way that was “fresh and raw and disturbing.” With this newfound sense of inspiration and understanding, the pair wrote Karski’s story into a book entitled Remember This: The Lesson of Jan Karski that serves as the script for both the play and the upcoming film starring Strathairn.

The play was initially developed as an ensemble piece, with Strahairn playing Karski, and featured an ensemble of Georgetown students. It premiered in this form in 2019 in a one-time performance in Gaston Hall, but its production was halted due to the pandemic. Eventually, it evolved into the one-man show that it is today, emphasizing Karski’s solitary nature and showcasing deep regard for individuals’ ability to try to make a difference.

In addition to the creation of the play, Goldman, Young, and Ijeoma Njaka—The Lab’s inclusive pedagogy specialist—developed a class entitled “Bearing Witness: The Legacy of Jan Karski Today” that seeks to use Karski’s story as a central framework to spark dialogue and understanding between students. The course is currently being offered for the second time this semester, and it incorporates Karski’s primary materials as well as Strathairn’s performance in Remember This to question what it means to bear witness to injustice. With Karski at the center, students in the course grapple with their own encounters with injustice and how to proceed with the responsibility of having witnessed such realities.

“The questions and the challenges that Karski’s life raises are still very present in the contemporary moment and very urgent to think about,” Goldman said in an interview with the Voice.

Julia LoCascio (NHS ‘22) was one of the first audience members to see the show when she attended a rehearsal in 2019. After this viewing, LoCascio enrolled in the inaugural running of the course, where she deepended her awareness and perspective on the lessons of Karski through conversations within the course as well as his primary accounts.

“While we are not currently suffering through World War II or the Holocaust…there are certainly things in our world that are not as they should be,” she said.

Karski’s story has broad relevance and a widely applicable message. Despite the extraordinary circumstances that made his life notable, the lessons from his story are timeless. Goldman emphasizes the importance of experiencing this story in the present moment; he notes that the production’s message differs from its genesis in 2014 to its one-off performances in 2019 to its current premiere. Each time frame compels audience members to bear witness to different realities, underscoring the enduring nature of the lessons to be taken away from Karski’s life.

“Theatre is ultimately a specific encounter with specific people on a specific date,” Goldman said.

Karski’s story is further relevant to Washington, D.C. both in terms of his life and the city’s role as a political hub. Chris Jennings, Executive Director of the Shakespeare Theatre Company, reflected on the intersection of theatre and politics in an interview with the Voice.

“While our work is mostly classical, we are based in D.C., and this is a story that is of great importance and has great relevance to being in the nation’s capital, and it’s important that a theatre like ours can serve as a host for it,” he said.

Jennings centered the importance of theatre as a groundwork for societal discourse.“Our civil engagement demands and requires that theatre have a voice,” he said.

Goldman also indicated that the earliest purpose of theatre was to bring an issue into the public arena in order to spark dialogue, a function that remains at the heart of Remember This.

“The artistic event is only as interesting as the kinds of actions and discussions that come out of it,” he said.

Throughout the show, the stage is set with a wooden table, two wooden chairs, and various clothing articles. The minimalist set ensures that Karski himself is the focal point, highlighting the power of his story. Storytelling transports the audience through a heavy and challenging history, leaving them to question what their individual responsibilities are in bearing witness to the current moment.

The power of the production lies in the profound resonation of Karski’s story with its audience members. The one-person cast and minimal set emphasize the authenticity and significance of his life and legacy; the story in itself is strong enough to teleport audiences into his history and bring his history into the present moment.

Given the magnitude of Karski’s story, Goldman considered the challenge of remaining true to the figure’s humility, even as the production honors him. In reflecting on the development of the play, Goldman noted the importance of keeping the production “lean and specific and direct in the way that it applies to the current moment.” The minimalist design elements to the show support the preservation of the truth and living element of Karski’s story.

The ‘lesson of Jan Karski’ pushes individuals to grapple with the reality of living amidst injustice and, in essence, asking themselves what it means to bear witness. The core of Remember This is not educating its audience on the story of Karski, but rather highlighting his messages that individuals matter in the way we utilize our voice and knowledge in the world. Karski’s story is not easy to digest; it recounts the realities of torture and injustice through an incredible reflection of individual courage.

“One thing a play can do is provide escape from [challenges]. This play’s not trying to do that, it’s trying to actually look at that,” Goldman said.

The role of theatre as a catalyst for questioning and social change manifests itself in Remember This. To effectively engage in the story, audiences must bring Karski’s story out of the theatre and into their realities. The power of his legacy lies in its ability to transcend time and apply its lessons of truth, individuality, and courage to the contemporary moment.

This article has been updated for spelling of names. 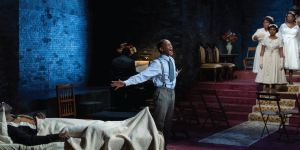