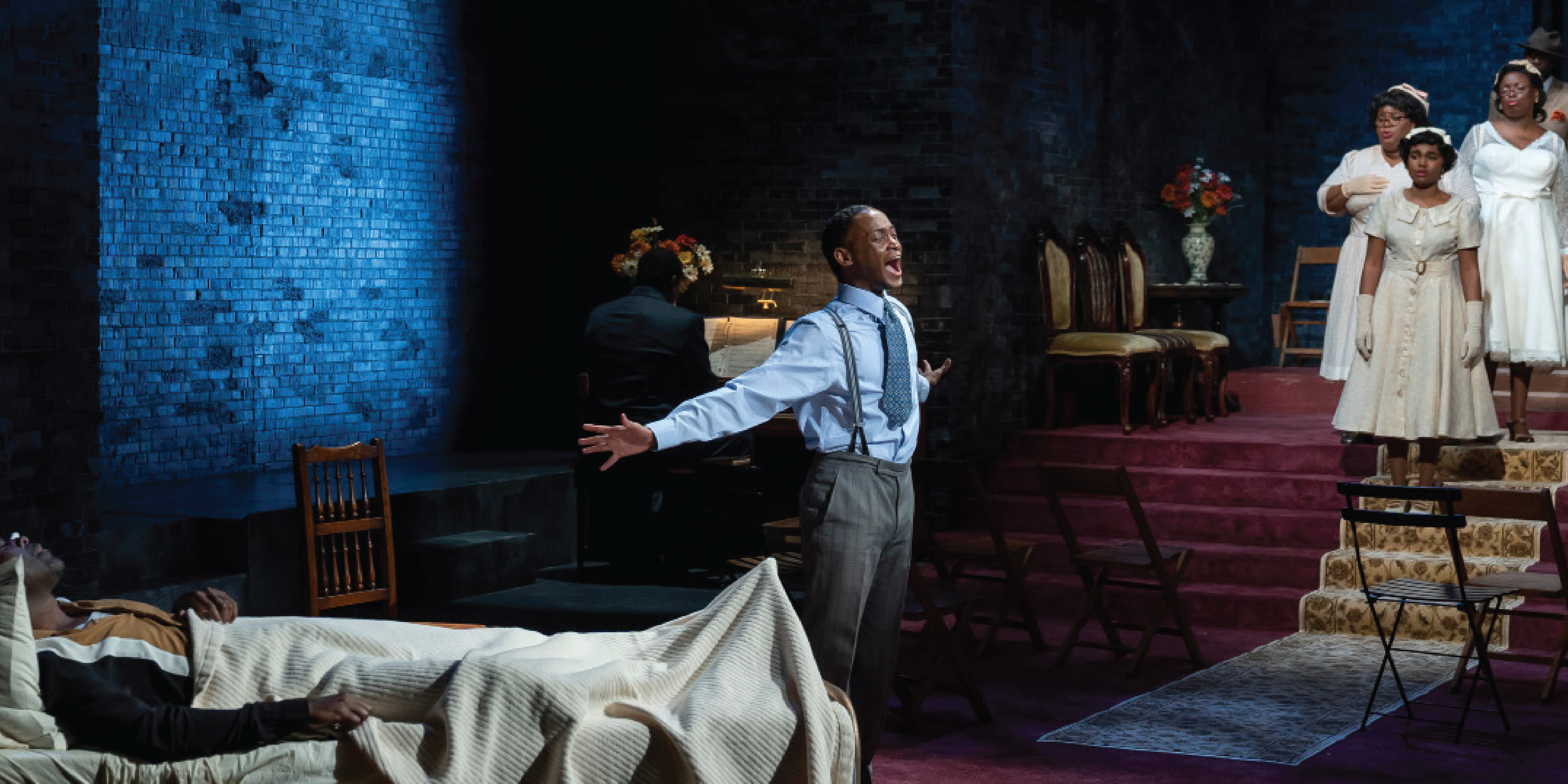 “The greatest poet in the English language found his poetry where poetry is found: in the lives of the people.” This sentence appears in a 1964 James Baldwin essay titled “Why I Stopped Hating Shakespeare,” but really, the words could be about Baldwin himself. Even in the 21st century, his works tell stories loaded with humanity that feel incredibly real. It is no surprise, then, that the Shakespeare Theatre Company chose to produce The Amen Corner, Baldwin’s first play.

The Amen Corner, which runs through March 15 at Sidney Harman Hall, is a major part of “Amen, Baldwin! A Living Celebration” and accompanies exhibits, classes, and celebrations at the theater and around the city this February, honoring the life and legacy of Baldwin and his work. The conversation even reached the Georgetown community, with a discussion on the play that took place on Feb. 25.

First produced at Howard University in 1955, The Amen Corner tells the story of Margaret Alexander (Mia Ellis), the pastor of a small congregation in 1950s Harlem which falls into tumult over the course of the play. Problems arise in both her personal and religious lives when her estranged husband (Chiké Johnson) finds her in New York and her son (Antonio Michael Woodard) decides to embark on his own journey away from his childhood home. 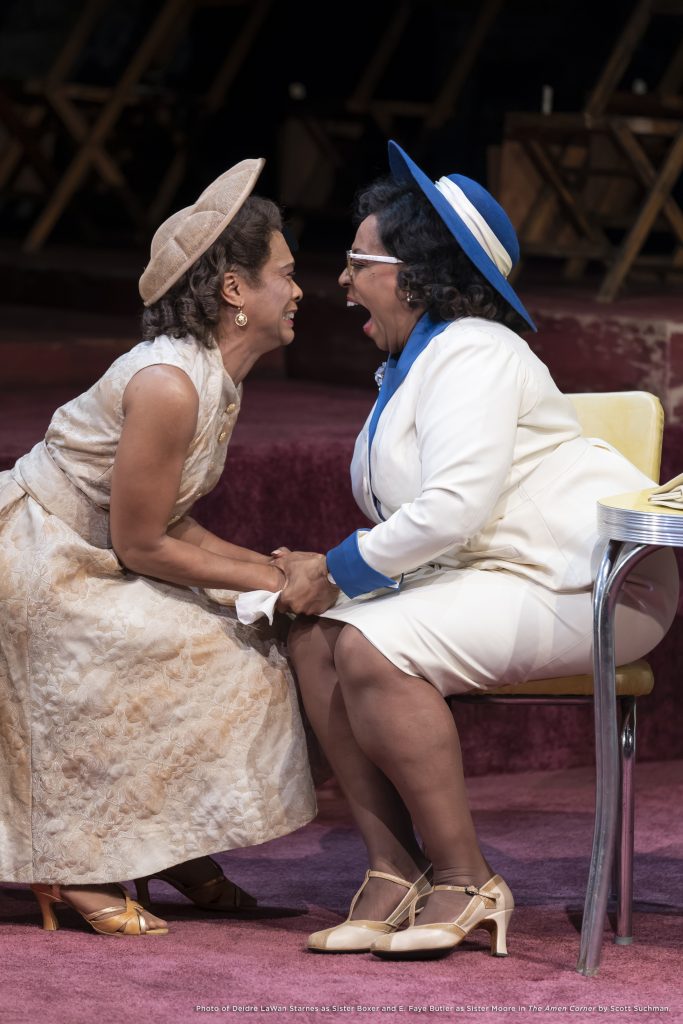 The stage at Sidney Harman has been transformed into a street corner which converges with a myriad of apartment buildings, alleyways, and Margaret’s church. The space is impressively laid out, with many exits for actors in the alleys between the massive edifices. Rooms in Margaret’s home make up the downstage area. In this constructed corner, there exists both religious and domestic life, intrinsically intertwined with the set design.

When the lights dim and then refocus on center stage, the entire theater space, including the audience seating, functionally transforms into this church. As the spiritual music swells, house lights come up, bringing the audience into the congregation. The moments of audience illumination feel more like a church service than a professional theatre production, successfully creating audience interaction and immersion unusual for a large theater.

This particular production works distinctly with music as a way to explore the black church. Music Director Victor Simonsen arranged 17 songs for the production, adapted from Baldwin’s text. Some of the musical moments relate to known church spirituals, but others are original melodies of Simonsen’s creation. The actors that make up Margaret’s small congregation sing each song genuinely, celebrating joy and requesting help for hardship. Though the songs can drag on and make certain scenes take a tediously long time, they increase the feeling of immersion into the congregation Margaret leads.

As an actress, Ellis compellingly grapples with the issues Margaret faces: a son growing up, a terminally ill ex-husband coming back into the picture, and a congregation pushing back against her leadership because of issues tied up with her reputation and gender roles. Her performance is striking in its simplicity, not reliant on gimmicks or overacting to represent the deep and complicated turmoil Margaret—at once a great leader and a truly broken person—experiences throughout the play.

It is hard, though, to point to only one standout performance. Harriet D. Foy, who plays Margaret’s sister Odessa, delivers heart-wrenching monologues in defense of Margaret as a pastor, drawing on the pure anger and pain she feels because of the church elders’ attempt to betray her sister. The church elders themselves bring a comedic edge to the play. The perfectly timed jokes and innuendo coming from these actors, especially E. Faye Butler, who stars as Sister Moore, contribute to the audience experience nearly as much as the starkly contrasting moments of poignant sadness. 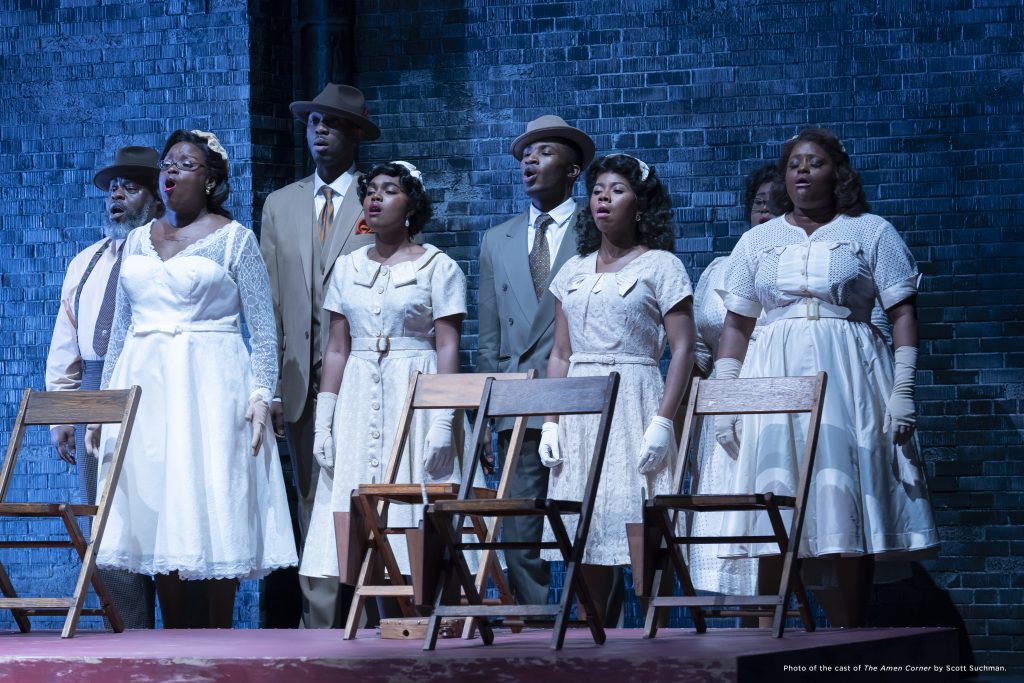 Antonio Michael Woodard portrays David—Margaret’s young son who dreams of autonomy and a musical career—as the timeless figure of someone just following a dream. Chiké Johnson, who plays Margaret’s husband Luke, exudes a similar energy, but one that has been weathered and worn down over years of failure. Johnson plays heartbreak well, but he plays hope, which his character finds in David, even better.

As director Whitney White references in her director’s note, the overarching gift of the play is allowing audiences to see truly humanized black characters both within their individual lives and as a larger community. “It is such a gift to see Black characters in such a multifaceted way,” she wrote. These actors embody that work and mission, not flat or one-dimensional in their performances, but instead portraying characters in a way that feels full of life.

The Amen Corner, while distinctly tied to the period in which it was written, holds timeless lessons. Above all, it is a play about estrangement and reconciliation between members of a church community. It grapples with large-scale religious questions, pondering the suffering of innocent people and what it means to live in the service of God. Margaret poses these questions actively onstage, culminating in the moving monologue she delivers at the end of her extreme suffering, in which she calls upon her church community to join her once more.

An important commentary on religion and issues of belief, Baldwin’s play and the characters in it reach a conclusion of faith in spite of hardship and grief. Even after losing her husband and, in some ways, her son, Margaret stands strong and returns to face her rebelling congregation. Pained and broken, she asserts her worth and her ability to lead.