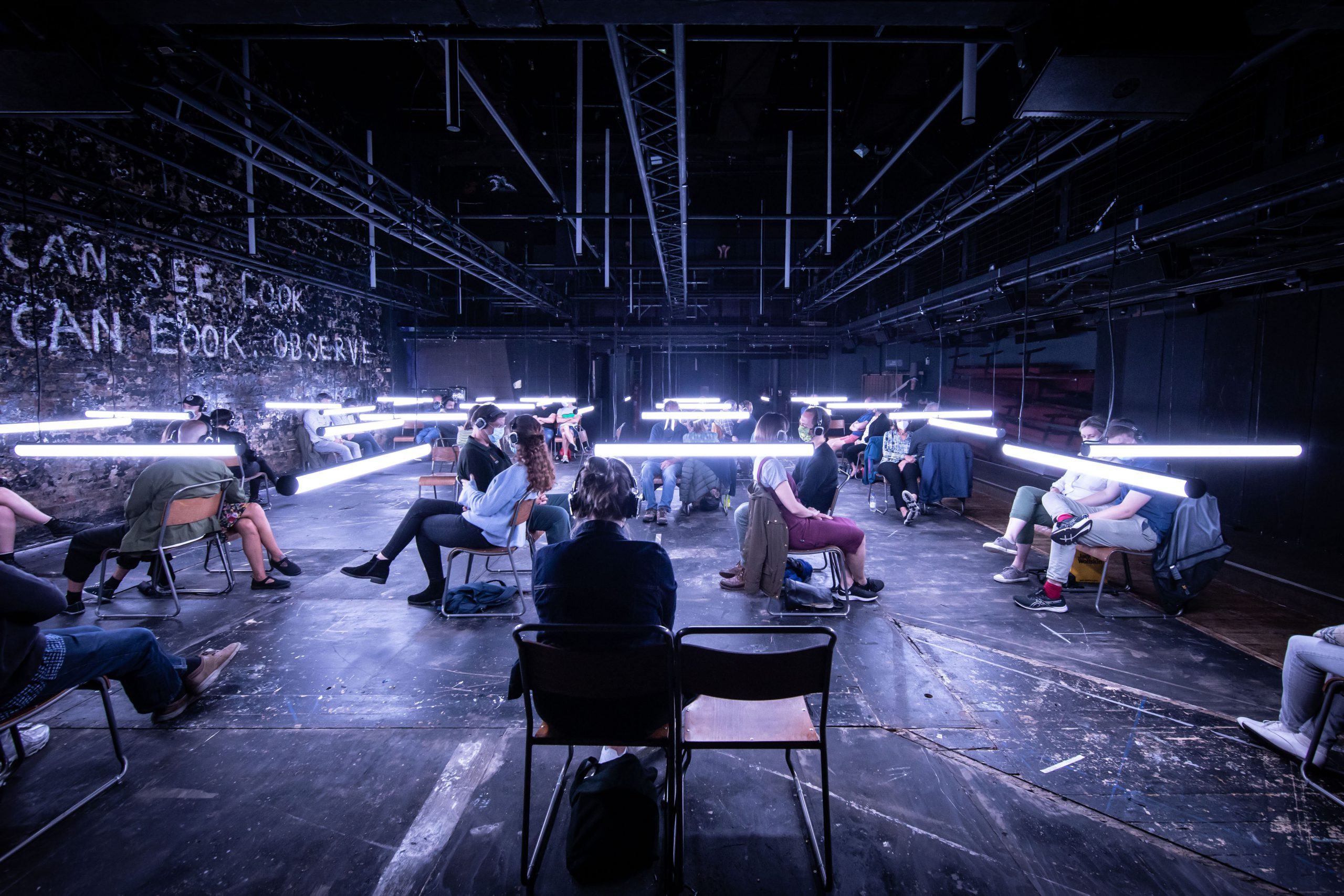 Shakespeare Theatre Company’s Sidney Harman Hall has opened the house once again. Well, not “house,” exactly. The theater’s in-person debuting return, an actorless show, begins the moment the audience files onto the stage. Rather than seating people in the audience, the show transforms the stage into a black box theater, with the curtain closed to the rows of seats beyond. Theater employees instruct audience members to put on a set of headphones, and as the lights make their first change, the audience suddenly plunges into the world of Blindness.

The plot of Blindness, adapted from a novel of the same name by José Saramago, follows a contagion of blindness that overruns society. Through masterful storytelling, Simon Stephens’s adaptation walks audiences through the development of the epidemic: from a seemingly normal day and the first known patient all the way through a military-enforced quarantine to an entire country full of blind people. Though audiences may be wary of a show featuring pre-recorded audio as opposed to live actors—it was recorded at the Donmar Warehouse in London—Blindness is worth the trek to Sidney Harman Hall.

Fitting for the pandemic times in which it has been produced, Blindness examines not only the contagion and its resulting despair and paranoia, but the human connection and hope expressed during times of strife. The show leaves audiences with an overarching message about the importance of bearing witness: “If you can see, look. If you can look, observe.”

Arguably, the main character in the production is Jessica Hung Han Yun’s lighting. Exposed fluorescent lights create movement within the show, changing color and mimicking oscillation in their original positions before plunging downward and flinging the audience into darkness. The darkness is total, rendering audience members completely unable to see for long durations of the show. Even exit signs provide no light; in case of emergency, there are flashlights attached to each seat that can be used to signal to an attendant that one must leave the theater. The total darkness is all-consuming and absolutely terrifying. Every so often, namely at major turning points in the storytelling, the lights will flicker on. These glimpses of terror and hope are so few and far between, though, that the darkness—intentionally—begins to feel never-ending. The result is petrifying but ultimately thrilling, and even cathartic.

That being said, the show’s perception of blindness can feel like a mimicry of disability. Certainly, putting the audience in total darkness is an attempt at giving sighted people a sort of momentary blindness, like that experienced by the characters in the story itself, who do end up regaining their sight. However, the show also presents blindness as an epidemic, which is sort of an odd formulation, but one that does come from the source text. At its center, the story is one of debilitating epidemics rather than disability, in spite of the show’s design being centered around blindness itself.

The lone actor, Juliet Stevenson—whose voice is featured though she is not present in the space—plays a myriad of roles at once: the narrator, the wife of an eye doctor, and various supporting characters throughout the narration. The eye doctor’s wife, the heroine of the story, somehow retains her sight through the blindness epidemic. When her husband is shipped off to a quarantine facility, she travels with him to infiltrate it, trying to advocate and provide support for those who have gone blind. Stevenson’s performance is moving and versatile. She inhabits the different voices seamlessly, as if she actually enters the different personas, though she is not even in the room. Without any visual or physical acting, she takes on the voices and cadences of an entire society. She represents fear, pain, and desperation so well that audiences will struggle not to be immersed in the frantic emotion coming through their headphones. At times she storytells, at times she speaks directly to you, and at times she converses with other characters, who are left unheard as well as unseen.

Standout design does the bulk of the work in creating the world of the play and supplementing the parts of the story conveyed through Stevenson’s voice. Ben and Max Ringham’s sound design, which takes a myriad of forms—music, sound effects, ambient noise—does a lot of this legwork. For the audience, what comes through the headphones constructs the world they are immersed in, and constant ambient noise builds a sense of presence in the world of the play. Additionally, futuristic and dystopian sound effects add to the sense of terror, and incorporated music pushes moments forward with ease. Perhaps the most impressive part of the design is the localization of the sounds. The audience can hear Stevenson walking behind them and footsteps traversing the room, though it is simply a pre-recorded sound coming through headphones. Sometimes, Stevenson murmurs so close that you can nearly feel her breath as she whispers in your ear.

Though the show does not even try to resemble anything like a “normal” one, returning to the theater is nothing short of exhilarating. During one plunge into darkness, the curtains open unbeknownst to the audience and dim lights slowly come up on an empty house. Looking at where thousand-person audiences once sat and, soon enough, will sit again, it is impossible not to feel the purest form of hope. For people who enjoy theater-consuming and theater-making alike, the familiar sight of an empty house feels harrowing and joyful. It seems at once a promise—a light at the end of the tunnel—and a reflection, showing us how much the arts have struggled and lost over the course of the past year. Though this kind of show is far from typical, the very fact that it takes place in-person is an indication of theater’s resilience and imminent return.

Both thrillingly terrifying and a total joy to experience, Blindness represents a magical in-person return for Shakespeare Theatre Company. It is an immersive experience just as much as it is a theatrical one, and though it is untraditional in nature, the themes of the show itself can easily be heard loud and clear after over a year of the COVID-19 pandemic. More than anything, Blindness reminds us to move forward through darkness and dark times as best we can. 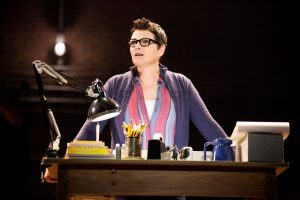 Fun Home Remembers the Joy and Pain of Looking Back

Sometimes stupid cool shit is all that matters