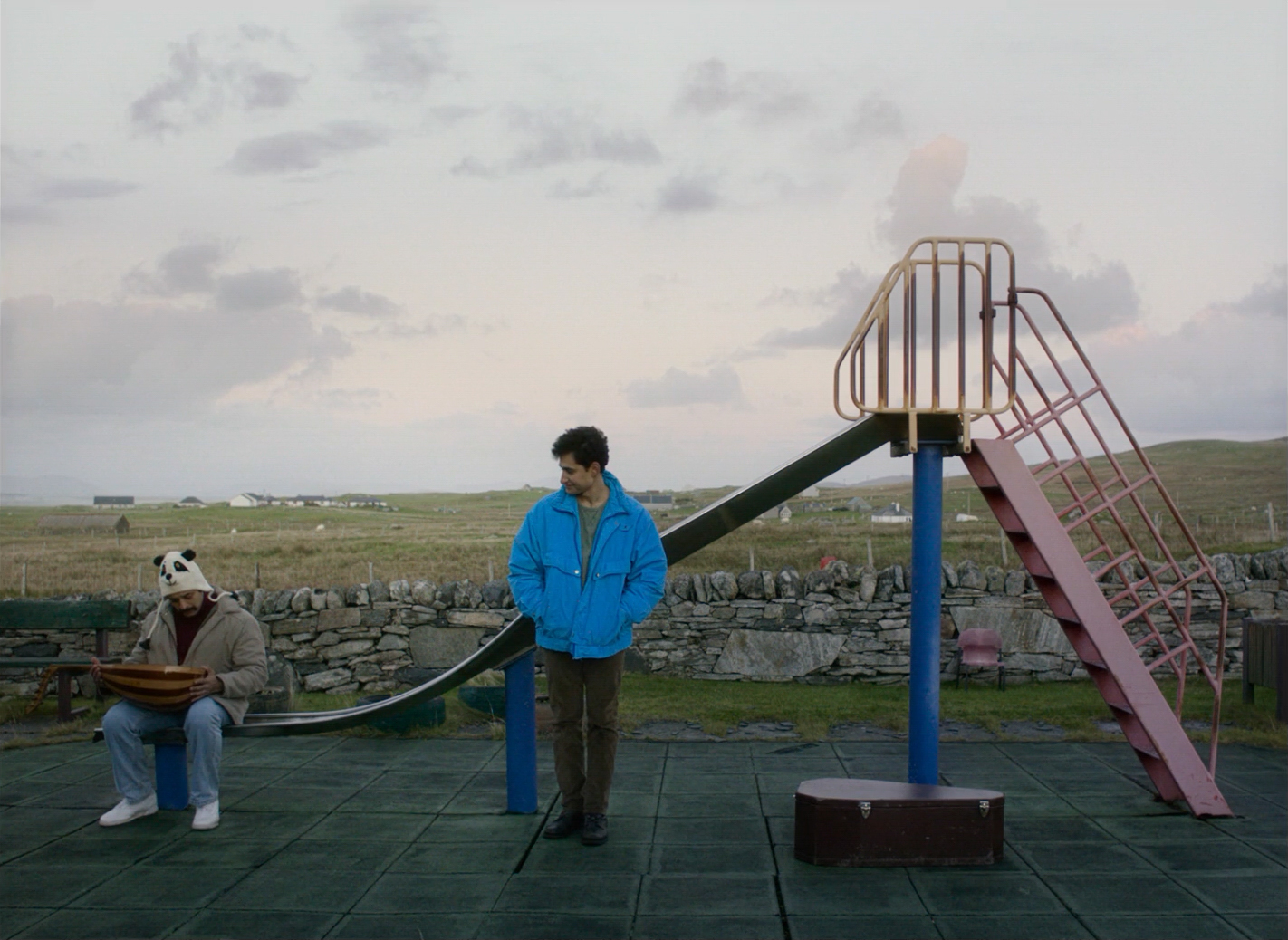 On the secluded Scottish Uists, Syrian refugee Omar (Amir El-Masry) awaits an update for his pending asylum application. Each day, in an almost Sisyphean display, he traverses the windswept island with a cumbersome oud case in hand—that is, the hand not currently wrapped in a pink plaster cast. Back in Syria he was the star progeny of his oud-playing grandfather, he tells his friend Farhad (Vikash Bhai). But, due to his injury, he hasn’t picked up the instrument since he left home.

Some of the refugees on the island have been there for years, anticipating the letter that will approve them for asylum in cities throughout Europe. Hailing from countries like Libya, Nigeria, and Afghanistan, these men are treated as though they are more in need of a re-education (they attend “Cultural Awareness 101” classes) than a relocation, even as their future hangs delicately in the balance. Limbo (2020) sharply satirizes the bureaucracy that red-tapes their lives, capturing one of the unseen dilemmas of the refugee crisis: the indefinite liminal space between departure and arrival.

Director and screenwriter Ben Sharrock had Omar’s pear-shaped oud case specially made to appear more like a coffin—as though it were entombing that part of his past life. For Omar, music is a connection to his country of origin, to the traditions that predate him, and to his parents, now living in Turkey. Far-flung and unable to perform, he is mourning the loss of that connection.

In a Zoom interview, Sharrock sat down with the Voice to discuss how he, like Omar, relates to the world through art.

I know you have a background studying Arab and Muslim representation in film, so were there any narratives or stereotypes that you were afraid of falling into when writing Limbo?

Way back in university, my degree was in Arabic and Politics. In my final year, I ended up writing my dissertation on Arab and Muslim representation in American cinema and TV. So, when the refugee crisis became very prevalent in the media, I was very sensitive to representations of refugees. There was this, I felt, process of dehumanization where we had [either] the demonizing or pitying of refugees.

What I was really focusing on was how to humanize the refugee experience—to avoid stereotypes or tropes, and what we’re used to seeing. At that point, there was a lot of focus in the media and in other films on the journey of refugees: showing the most tragic circumstances. I think the amount of [those types of representations] makes it difficult for people to look beyond that. So it was really about looking at refugees as human beings, like us, that are interested in similar things and have lots of things in common with us. [Limbo’s] just about people. It’s about human beings.

The film deals with very difficult moments in these characters’ lives, but it also has a lot of comedy in it. Did you ever have an issue trying to balance the two?

That sort of use of humor and drama is something that is quite integral to my sensibility as a filmmaker. It wasn’t so much that I looked at this subject matter and thought, ‘I’m going to use humor with it.’ I felt that in the context of this broad subject matter of the refugee crisis, humor is a really useful way to access this subject in a different way. Ultimately, what I want to do with this film is to raise awareness of the subject matter and to attract people to watch a film about refugees who might not [otherwise] do that.

I think we’re at a really interesting point in time in terms of art and representations of issues going on in the world. You just touched on it a bit, but what do you think the role of the director or screenwriter is in that sort of landscape?

I don’t think it’s one singular thing. There are so many writers, directors, and filmmakers that are there to make films that are purely entertaining, that are escapism. And I think that can be great as well, because people, at times, will need that escapism in their lives. For me personally, I am very interested in challenging and reflecting what’s going on in the world. I’m very interested in sociopolitical subject matter and marginalized groups of people, and I feel a responsibility to say something about the human condition in the context of the world right now. That’s what’s interesting for me.

There’s this quote in the film: “A musician who doesn’t play music is dead.” What does it mean to you, as an artist and director?

That line in the film is something that’s very built into the metaphorical underlayer of Omar’s emotional journey. It’s about Omar suffering through grief, for the loss of what he regards as his former identity. So much of the film is actually motifs and metaphors related to death, because he’s going through this grief. For example, the oud case being a coffin for his soul is another line that’s used. The oud case itself was specially made to look like a coffin. In some way, [Omar is] inactive, and his soul comes alive when he plays music. That’s his release that we see at the end of the film.

I think that, for me, if I wasn’t making films, I would create art in a different way. I think that it’s something I have inside me. I have a need to look at the world in a certain way. I can’t really escape from that. I was deeply interested in and passionate about the refugee crisis, and my way to respond to the injustice that’s going on in Europe and across the world is through making films. But if I wasn’t a filmmaker, I would probably do it another way.

Did you have any references or inspirations for the visual style? It’s this desolate island, but it’s shot in this sort of fun way.

Also, I’m a big fan of the Academy ratio, so what was the decision-making that went into that?

That was [a decision made] for two reasons. In part, to create that feeling of Omar being trapped on the island, and the feeling of him being closed in and trapped by the frame. It was also about how we as the audience see the refugees—and how that corresponds with how the media sees refugees, as well—which is really, physically, putting them in a box.

I heard that this was the first time anything had been filmed on this island, and that it has very limited service, similar to the fictional version of the island in the film.

We were the first feature film to shoot on this island. I wrote the film, in part, on the island, so it ended up being written into [the film] in many ways. I also thought a lot about visually piecing together the story world of the film and what that would look like with the island. And then it was very difficult to think about shooting it anywhere else.

Once we were all there, it fed into everything. It definitely fed into the performances, because it was real. What they were experiencing—with the freezing cold temperatures, wind, rain, and everything—all of that was real. So I felt like it helped them bring that to life even more. You know, it’s much better than shooting against a green screen with a fan blowing the hair. [Laughs.]

We were all working toward the same mission and the same vision. And we were all there on the island, locked in as this big family, living through the stress and challenges of shooting a film there, together.

This interview has been edited and condensed for clarity. 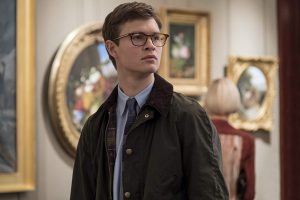