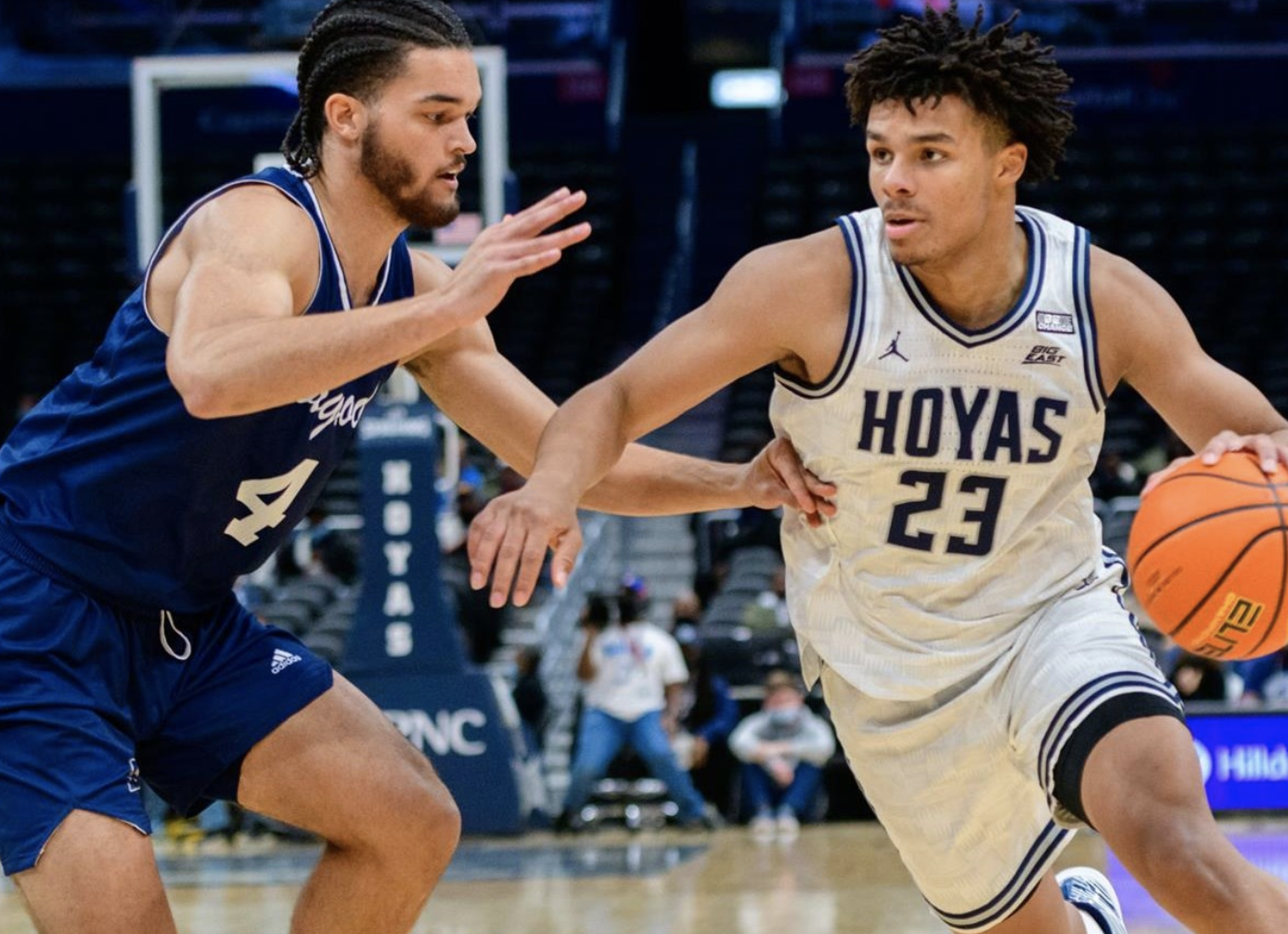 On Nov. 30, the Georgetown Hoyas men’s basketball team (3-3, 0-0 Big East) defeated the Longwood University Lancers (4-4, 0-0 Big South) by a score of 91-83 at Capital One Arena. The Hoyas came out on top carried by a standout performance by sophomore Collin Holloway, who recorded a career-high of 23 points. Four other Hoyas also put up double digits, including 15-point performances from graduate student Kaiden Rice and freshman Aminu Mohammed, as well as a 14-point day for sophomore Dante Harris.

Coming off of back-to-back losses in the Paycom Wooden Legacy tournament in Anaheim, Georgetown was looking to bounce back with a convincing win against the Lancers. Longwood surprisingly jumped out to an early lead, going on a 9-0 run to start the game. Rice attempted to stop the bleeding with a quick three-point shot followed up by another just over a minute later.

The Hoyas exchanged blows with the Lancers for most of the first half, as the team tried to chip away at the early nine-point hole it dug itself into, but the Lancers continued to respond. Senior DeShaun Wade put Longwood on his back with 21 points and helped to keep their lead for most of the first half. Eventually, a big three-point shot about midway through the half by Holloway kicked off the Georgetown rally and his big night off the bench. Holloway and freshman Jordan Riley combined to cut the Longwood lead to just three points, effectively bringing the Hoyas back into the game.

With about five minutes left in the half, Rice hit a big 3-point shot to tie the game for the first time since tip-off. Georgetown would take the lead on a breakaway layup from Mohammed with 3:56 left in the half, and the Hoyas never relinquished the lead from that point on, leading the Lancers 36-31 at halftime.

Holloway continued his standout performance, opening the second half with a 3-point shot and back-to-back free throws to increase the lead to 11 points. Graduate guard Donald Carey’s early seven points in the second half, combined with a big Harris three-pointer,  increased the Hoyas’ lead to 14 points, the largest of the night on either side. The Hoyas needed every bit of that buffer, as Longwood went on a rapid 13-0 run to cut the lead back to one.

What seemed to be a game under control for Georgetown quickly turned into a contentious back-and-forth in the last 10 minutes. The Lancers never regained the lead, as Harris, Mohammed, and Holloway seemed to come up big on offense and have an answer for every Longwood point. The Hoyas pulled away in the last minute to lock in a solid 91-83 win against an impressive Longwood team.

The Hoyas are back in action at 2 p.m. on Dec. 5, taking on the University of South Carolina Gamecocks at Colonial Life Arena. Follow @GUVoiceSports on Twitter for more updates and coverage of all winter sports at Georgetown. 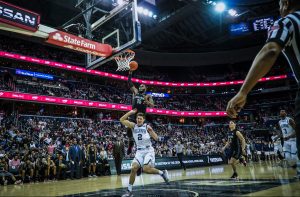 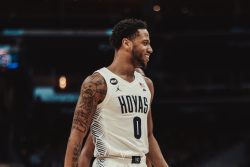