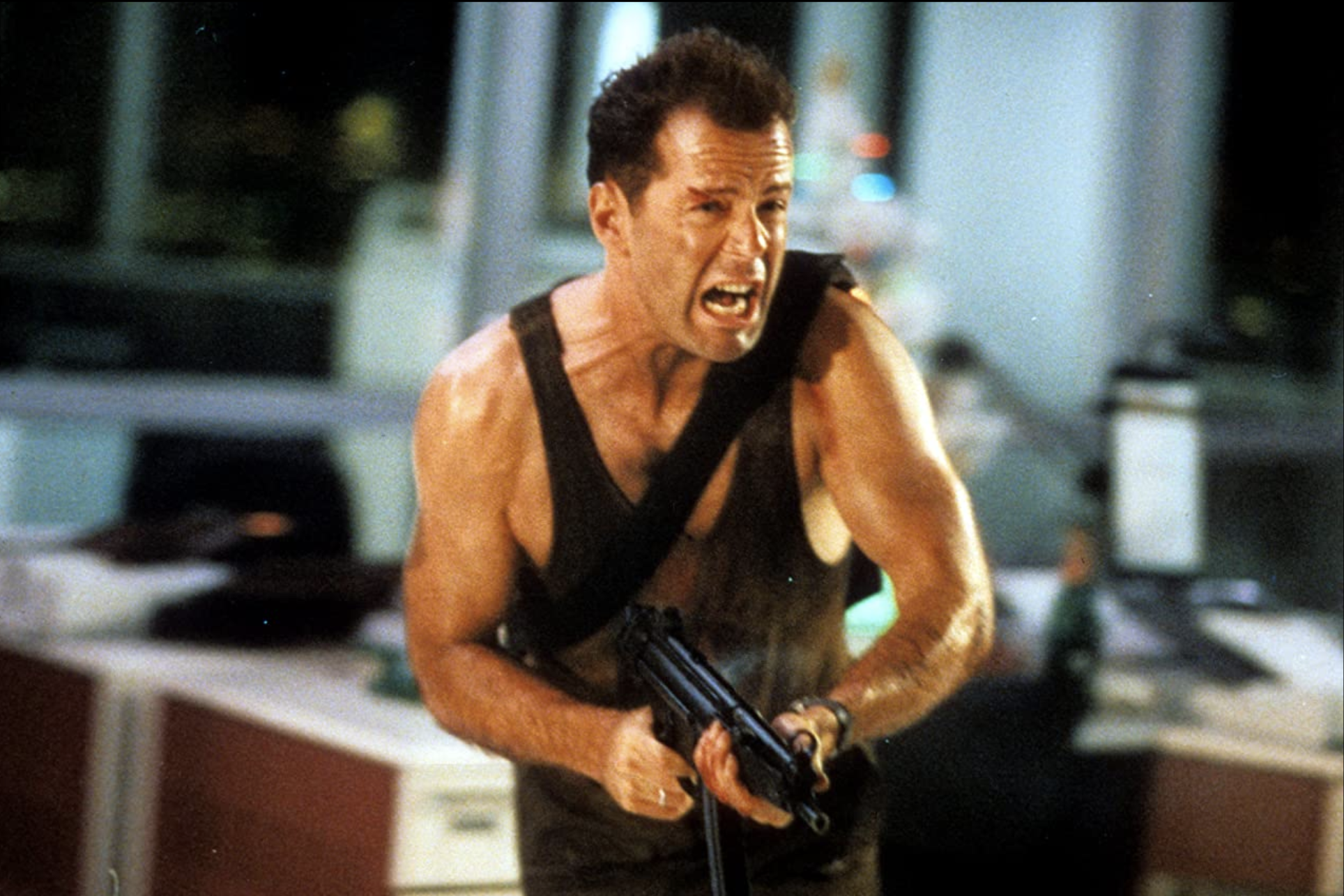 Let me set the stage for you: It’s Christmas Eve. Whether you celebrate the holiday or not, you know that something is in the air tonight (Phil Collins confirmed). You crawl into your twin-size bed in your childhood bedroom and open your laptop. ‘What to watch?’ you ask yourself. ‘What will truly prepare me for Christmas?’ In my opinion, there is only one correct answer: Die Hard (1988).

From a purely factual standpoint, Die Hard deserves its place in the ranks of Christmas classics. The entire film takes place on Christmas Eve, the inciting incident is the disruption of a Christmas party, and there are four (4) Christmas songs featured throughout the film (not including the humming and singing). Outside of the film itself, how Die Hard is classified in society points to Christmas status. When I was scrolling through cable channels recently, Die Hard was playing on Bravo as part of their holiday programming. It has been scientifically proven that Die Hard is a Christmas movie. When I typed “Christmas Movies” into Google, Die Hard was listed under “Christmas dramas.” Even Steven E. de Souza, one of the Die Hard writers, stands by the film being a Christmas movie.

But let’s say you read all that, and you think, ‘No, Annie. This is just circumstance. Die Hard is a movie that just happens to take place during Christmas time. That doesn’t make it a Christmas movie.’ First, I’m disappointed with you and your narrow-mindedness, but more importantly, it is more than just the stats. Die Hard truly embraces the Christmas spirit.

Die Hard to some may just be an R-rated action movie about a man who is a rock, an island even. Alone in a tower in Los Angeles, he defeats the not-terrorist terrorists with sheer will and a machine gun (ho-ho-ho). While this is an impressive feat, John McClane’s (Bruce Willis) triumph over Hans (Alan Rickman) and his team is not what this movie is about. It’s about a man trying to reunite with his estranged wife and get his family back, and isn’t family what Christmas is all about?

When you take that all into account, one could (correctly) argue that Die Hard is actually a family Christmas movie. And before you say it is too violent and profane to be a family film, there’s murder in Bambi (1942), and I’m pretty sure Josh Brolin says “shit” in The Goonies (1985). People are not going to stop showing their kids those movies any time soon.

Die Hard is a Christmas movie, and on Dec. 25 I’ll be hopping in my car and making my annual trip to the real home of this holiday season: Nakatomi Plaza.

I’ve never understood it when people say Die Hard is a Christmas movie. It’s an R-rated action movie that came out in July, the middle of the summer. Yes, it takes place on Christmas Eve, but there’s nothing else in the film that is particularly Christ-massy: the office party, the soundtrack, and the funny references to the holiday are just a product of the film’s setting.

Christmas doesn’t contribute anything meaningful to the story other than as context. Die Hard would still be Die Hard even if it took place on literally any other day of the year. A holiday party and fuzzy ideas about family aren’t enough to make a Christmas movie—the day needs to take on more significance in the film.

There’s something special about real holiday movies like Elf (2003) and The Grinch (2000) that make you want to watch them this time of year. They celebrate the power of love to change people and bring them together. Family and friends gather round and watch these films to revel in this feeling. Die Hard is a great movie but its explosions and witty one-liners don’t capture this sentiment at all.

Also, the film fails the one condition for what constitutes a holiday movie: being family-friendly. It’s about a cop who kills a group of terrorists to get back together with his wife and contains the requisite violence you’d expect from that type of story. I’m guessing that you don’t think a dead man in a Santa hat and a sweater with “NOW I HAVE A MACHINE GUN HO-HO-HO” written in blood on it is the most appropriate image to be spreading to children this holiday season. Die Hard—like so many other action movies—perpetuates the idea that violence can solve issues and even bring families back together. Is this the message you want to share with your loved ones this holiday season, no matter how entertaining it may be?

Even John’s limo driver, Argyle (De’Voreaux White), seems to agree that what’s happened in the film is not even remotely Christmas related: walking away from Nakatomi Tower at the end of the film, he says, “If this is their idea of Christmas, I gotta be here for New Year’s.” Counting Die Hard as a Christmas movie opens up a pandora’s box of bad takes. Is Iron Man 3 (2013) also a Christmas movie? What about Ted (2012)? Christmas is just a coincidence in all of these films, nothing more.