Outside the Georgetown bubble: Recent grads adjust to life in D.C. 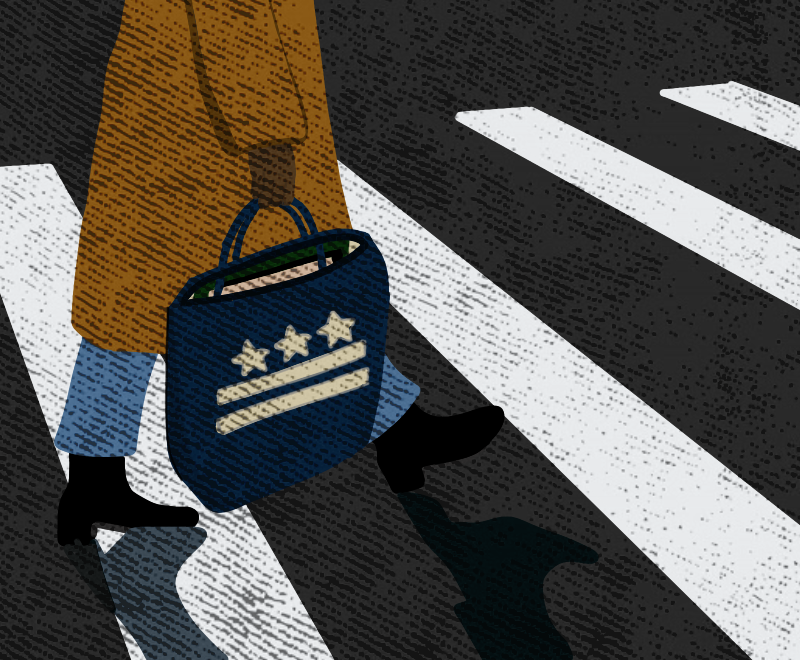 After graduation, Onrei Josh Ladao (COL ’21) was working three jobs—tending a bookstore, bartending, and waiting tables. Burnt out by the workload, he was struggling with the transition to post-graduation life. Then a Georgetown alum offered a helping hand.

“I found my contract position through a [Georgetown Scholars Program] alumnus, and the staff members of GSP were extremely supportive and insightful when I was preparing to apply for the full-time position,” Ladao, who now works at GSP, wrote in an email to the Voice. “I was stressed about making ends meet and not knowing my direction in life, but having them to rely and fall back on helped ease a lot of the burden I felt.”

After their four years at Georgetown, the university’s 15,000 strong undergraduate and graduate populations continue interacting with one another and their alma mater. Not only do alumni play a formative part in other graduates’ lives, but they also serve essential roles in the District.

Georgetown students regularly choose to stay in and around Washington, D.C. after earning their bachelor’s degree. This isn’t unique to Georgetown alumni—at colleges in the west and northeast, nearly 75 percent of students stay on their respective coast after graduation. For Hoyas, nearly 44 percent of those in the class of 2020 who stayed in the United States settled in D.C. to work in fields like management consulting, investment banking, and health care.

For graduates like Claire Hazbun (SFS ’20), living in D.C. was certainly the plan. Or at least it was before COVID-19 forced her to adjust. “I wanted to take the plunge back to D.C.,” Hazbun said. “I really wasn’t considering moving anywhere else.”

She had long known that she wanted to work at an international non-governmental organization. But when she found a suitable position at the International Republican Institute, the transition to full-time employee looked different in the full-fledged 2020 pandemic: Her final undergraduate class, graduation, and first day of work all occurred over Zoom. As vaccine rollouts accelerated around the country, however, Hazbun was finally able to join the community of graduates who live and work in Washington over a year later.

Though some, like Hazbun, did successfully return to D.C., many other alumni were not as fortunate. Even as vaccination rates grow, financial constraints and missed employment opportunities have still prevented many former students from returning back to their city.

“Half of the people I know have reasons to be in D.C. and are interested in being here, but aren’t because of the pandemic. It sent them home, and they haven’t had reason or resource to come back,” Julian Lark (SFS ’20, SSP ’22), who lives in West Georgetown, said.

The curveball thrown by COVID-19 flew in the face of the expectations many undergraduates acquire from Georgetown’s often intense, pre-professional environment. Looking back on his last two years at Georgetown, Dylan Jernigan (COL ’21) remembers the pressure to line up a prestigious job post-grad. “It is a culture of actively talking about what you’re doing after college,” he said. “With the strong internship culture, a lot of people end up working full time at whatever summer internship they did the previous semester.”

As students’ career plans adapted, however, this expectation also began to shift. “It was a lot more normalized to not immediately have a plan June 1, or come the day after graduation,” Patrick Walsh (SFS ’20) said. “Part of that is necessity—that COVID has made job hunting very difficult for some industries—and part of it is how we’re able to see where our friends go and where they do their thing.”

Supposedly, the Cawley Career Center can offer guidance in matching students to career paths, helping with salary negotiations, and reading resumes, all of which should make the job hunt easier. Yet, it’s at times not helpful to students, especially those in more niche fields, according to Hazbun. “I wouldn’t say there was that much support that I would find useful,” she said.

As students settle on a chosen career, many land in the political realm. Even amid a pandemic, the draw for policy and international relations students to stay in the nation’s capital is often too hard to resist, and many graduates end up residing mere miles from the Hilltop. “Washington is going to be the place where my interests, my passions, and my values are easiest to access in other people,” Lark, who currently hopes to pursue a career in cybersecurity, said.

For some Hoyas, working on Capitol Hill is the ultimate dream job. In the 2020 elections, Georgetown sent 26 incumbents and one newcomer to be inducted into the 117th Congress. Other graduates choose to work more locally. One alum, Brooke Pinto (J.D. ’17), now serves as the councilmember for Ward 2 (the ward where Georgetown is located). Although Pinto was born in Connecticut, she stayed in the District to represent residents after graduating from Georgetown University Law Center.

“I know from personal experience as a Georgetown Law student, the universities’ [sic] commitment to serving the local community,” Pinto wrote in an email to the Voice. “I am proud that Georgetown’s world-renowned impact is felt right here at home.”

While Hoyas may wish to stay in Washington, D.C. after graduation, the cost of living often presents a barrier. The average monthly rent for a D.C. apartment is $2,238, and housing prices here are nearly 53 percent higher than the national average. After three years of guaranteed university housing, the transition to independent living can be excessively unaffordable and inaccessible.

“I know a lot of people who are meaning to come back to D.C. at some point, or could feasibly pursue their careers here, but in terms of where they actually physically live, a lot of them are back home or, frankly, in cheaper parts of the country,” Lark said.

For those who have made the decision to try to stay in the city, there are few official university resources to help students navigate the high cost of living. Some alumni feel that they are left in the dark when it comes to housing. Jernigan’s apartment is currently flooding, maintenance problems are building up, and the costs of rent and parking are soaring. Although he’d prefer to live alone, the financial burden of life in D.C. is forcing him to consider rooming with a fellow Georgetown alum to reduce the cost of rent.

“It would help if Georgetown would have had resources or if I would have known about them, but to be honest, what it all comes down to is cost,” Jernigan said. “Even if they did have resources, how many affordable apartments would have been there?”

Jernigan was not alone in his sentiments. “It’s hard to find places that are affordable,” Walsh said. He depended largely on Facebook groups and word-of-mouth from fellow Georgetown alumni to find his apartment in Dupont Circle.

These housing pressures have radiating effects on the larger D.C. community too. As much as some students struggle to financially stabilize after graduation, high-income Georgetown alumni may play a role in the destabilization of others. The top two employers for the class of 2020 were Deloitte and EY Global—both companies where the average salary is over $80,000. Combined with the fact that nearly 75 percent of Georgetown students come from the top 20 percent of families by household income, Georgetown alumni risk becoming gentrifiers by purchasing lower-cost housing, consequently increasing the cost of living and displacing low-income community members (which disproportionately impacts Black and brown people).

As students—who trend towards white affluence—disseminate throughout D.C. after graduation, they induce demographic change in the city they live in and the neighborhoods they choose to settle.

For decades, white residents have played a role in the District’s changing demographics. In 1957, Washington, D.C., became the nation’s first major majority-Black city, dubbed the “Chocolate City.” At the same time, Georgetown grew whiter—the Black community in Georgetown fell to around 9 percent of the total population from 30 percent in 1930. Gentrification hastened the Black community’s displacement, and Georgetown played a key role in this second “Great Inversion”—the migration of affluent, often white people away from urban centers like D.C.

As some university graduates settle into D.C.’s “up-and-coming” or “vibrant” neighborhoods—euphemisms that hide the racism inherent in the gentrification of neighborhoods like Navy Yard or Adams Morgan—they displace and disrupt communities across the District.

At the same time, living in D.C. asks alumni to be more engaged in the larger city and its issues.

“During my time at Georgetown, I didn’t experience D.C., but living near a Metro stop, I’ve experienced this whole new part of D.C. that was not easily accessible to me at Georgetown,” Walsh said of his Dupont apartment.

Indeed, with no Metro stop and GUTS buses operating only on weekdays, Georgetown’s physical infrastructure makes it easy for students to feel confined to the surrounding Georgetown neighborhood, especially for the majority of students without personal vehicles.

“For better or for worse, Georgetown is definitely a bubble,” Sarah Jiang (COL ’21), who is currently taking a gap year in D.C. before graduate school, said.

Jiang, who lives in Logan Circle, noted that the accessibility to other neighborhoods completely changed her perspective of the District. “It almost felt like it was a different city,” she said.

For graduates living locally, the new perspective on the District isn’t the only thing that takes adjusting.  In college, bonds with other students are facilitated by having a centralized community at hand, which provides proximity, shared experiences, and converging interests. After college, according to Walsh, it can take much greater effort to maintain or build bonds, even for those who stay in the District and remain in apparent proximity to fellow Hoyas.

“Adjusting to adult life was rough—work every day, I need to feed myself, pay bills and bills and bills,” Jernigan said. “I felt like I really didn’t have a social life at all.”

The pandemic limited the available avenues to make new connections, too. In 2020, bars, clubs, restaurants, and other activities where college graduates may meet new friends closed, and as locations return to normal amid vaccine and mask mandates, the challenges still have not evaporated.

“It’s an ever-constant process of figuring out how social dynamics work outside of Georgetown,” Walsh said. “You have to think more intentionally about how to cultivate relationships once those common bonds are no longer there.”

Despite the challenges of adjusting to postgraduate life, the plunge can be exciting and rewarding, according to Walsh. Each person’s desires and priorities will be different after they graduate, all of which can play a role in a student’s postgraduate life.

“You will be surprised by who you hang out with post-college and post-high school; it won’t be the people you immediately suspect,” Walsh said. “Trust your gut and you can’t make a wrong decision if you’re excited about an opportunity. You’ll make something work with that passion.”