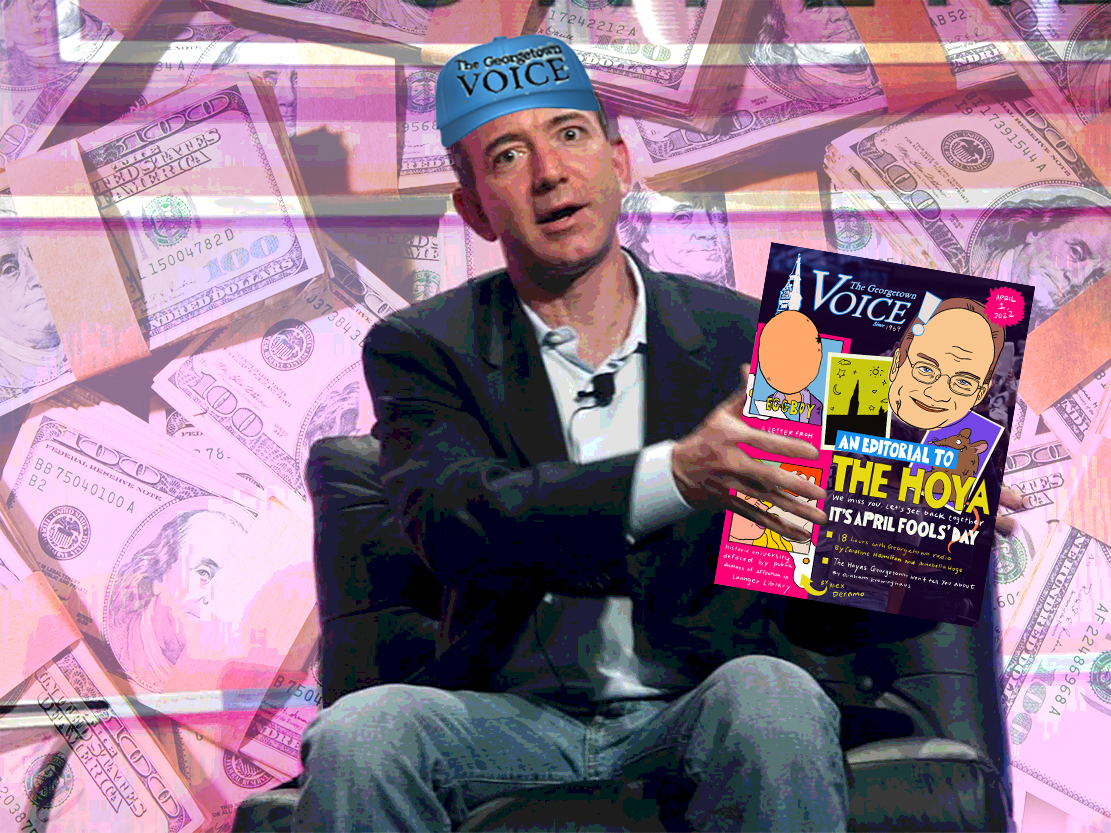 The Voice’s Editorial Board knew that Spring 2022 was going to be a tough semester. In December, we predicted that this would be our seventh semester in a row of declining revenues from print, on top of cookie advertising errors and the hefty price of Graham’s crossword—not to mention ruinous competition with the Stall Seat Journal. Still, we never dreamed we might consider selling our newsmagazine. But our recent look at our financial situation has shown us that something needs to change. There goes old Georgetown indeed.

Our response to declining revenues has always been to innovate. We brought on The Hoya’s former cartoonist as our Editorial Board chair, were plagiarized by a local politician, and even chose to argue against a resolution that would abolish GUSA. But these innovations, though high quality, have not translated into the cash flow we need. If our finances keep declining, we’ll have no choice but to cut funding for our IM basketball team. And we don’t want to do that. It’s not like we can count on the new GUSA Exec for kickbacks, either, after we called them “actively unsafe for students.” So, after weighing our options, we have made the decision to look for a financial backer who could keep the Voice successful.

In January, we set out to find a buyer who could give shareholders a fair deal and make the Voice newsmagazine brand stronger. We solicited over a dozen private equity buyers, but they were only interested if we agreed to cut costs and trim our staff—which is what GUSA has already been asking for years—so we said no. We wanted something different, something better.

Through all of that, though, one sharp-eyed investor stood out as someone we believe has the experience, drive, and commitment to protect the Voice from the storms of austerity. Jeffrey Preston Bezos has already prevented our peer D.C. publication, The Washington Post, from fading into irrelevance, and we need him to do the same for us. Only he can guide us through the journalism industry’s uncertain future.

Mr. Bezos could help us grow from an organization that exhaustively reports on the students who fund us (conflict of interest, amiright) to being an international news publication that people would take seriously when we endorse presidential candidates. We have a great name like the Voice, which he can leverage into a national brand, unlike a lot of other publications’ names on this campus, such as Dr. Ranit Mishori’s ill-timed but well-read “Public Health Update.” And we already have a clear identity, considering our ambitious reporting—from the ranking of Sebastian Stan haircuts to the infamous anti-Chunky piece—so Mr. Bezos need not worry about helping us figure out who we are as a publication. Also, the Amazon Bookstore on M Street would make a great new office.

You have to be impressed by the business Mr. Bezos built, the way Amazon takes care of its customers and permanently ruined so many of its smaller competitors. We need that kind of strength in leadership, as well as access to drones, which would make our distribution, currently done solely by the three Voice writers who care, much easier. It would also be cool to get invited to parties at his newly-renovated place in Kalorama and mingle with D.C.’s upper crust. Our Henle socials aren’t the networking events they used to be.

Mr. Bezos has already demonstrated a desire to support youth exclusively in the area: donations to libraries, programming classes for kids, sweet stuff like that. He’s so committed to supporting only our city that he doesn’t pay the federal income taxes that would help fund programs for anyone else elsewhere in the country. We want an owner with that level of devotion to our home city. Mr. Bezos is that owner.

What would Mr. Bezos have to gain from taking a student newsmagazine under his wing? First and foremost, it would put him far ahead of his closest rivals. We don’t see any evidence his fellow tech titans are even thinking about the troubles facing student journalists. While Elon Musk tweets and gets in trouble with the government, Mr. Bezos has the chance to tangibly support the next generation of Bunn Award-winning student journalists, many of whose tweets are also funnier than Musk’s, for a fraction of the investment risk.

And his respect for journalism cannot be understated. He already knows that making journalism succeed is hard. Making underfunded student journalism succeed will be the perfect opportunity for Daddy Bezos: We think paying us minimum wage through university bureaucracy could be the most complex strategic problem he’s ever had to crack—even more complex than paying his Amazon workforce a living wage. But we know he’s not someone who shies away from a challenge.

We think Mr. Bezos’ ownership of yet another promising journalistic establishment underscores his commitment to the promise of student journalism. As The Washington Post made clear, “Democracy Dies in Darkness”—Mr. Bezos, your management could help our little school find the light. Because, on our own, we’re not sure that we can really count on our student leaders to give us the resources we’re going to need to reach all our readers.

But the Voice has always prided itself on its ability to adapt. A complete transfer of ownership that puts our beloved newsmagazine in the hands of one of the world’s richest white men is exactly the kind of progressive change that this Editorial Board would enthusiastically support. It could also mean the Voice goes to space. Halftime Mars section, anybody?

Jeffrey Preston Bezos did not respond to a request for comment on this article.

Correction: An earlier version of this piece failed to disclose that one Editorial Board member writing this piece purchased “Powerstep unisex adult Boosters Arch Support, Gray, Regular Regular US” with an Amazon Prime Student account two days before this piece was published.