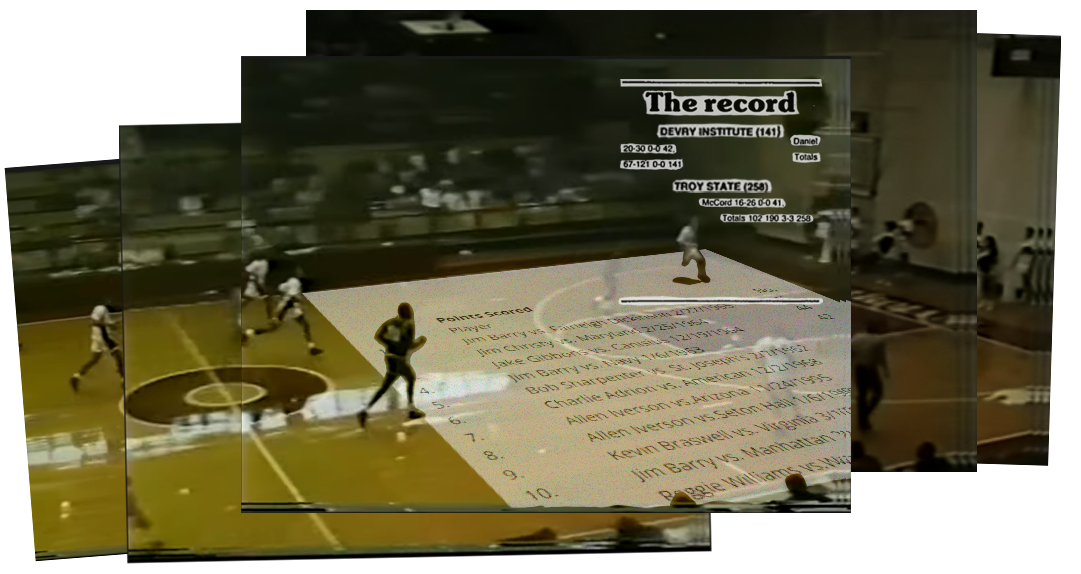 On Jan. 12, 1992, some 3,100 years after the sacking of ancient Troy, a new odyssey was taking place somewhere along U.S. Interstate 85. After a basketball game that literally broke the scoreboard, the Hoyas were on a bus home from Troy (Alabama), where the Troy State Trojans scored an unbelievable 258 points on them. You read that right. Two hundred and fifty eight. But Georgetown didn’t play that storied day. DeVry Institute of Technology’s Decatur campus did. The DeVry Hoyas.

How did it come to be that Georgetown shared its supposedly unique name with a for-profit computing college near Atlanta? Why should we care? As it turns out, this bizarre DeVry team has a rightful claim to a spot in the Hoya record books. Not only were the non-Georgetown Hoyas on the losing side of the highest-scoring basketball game of all time, but a DeVry Hoya scored more that game than all but three Georgetown Hoyas in history.

It’s past time we understood what happened on Jan. 12, 1992, and rewrote the history of “Hoya basketball,” inducting our Hoya brethren into our records.

The DeVry Hoyas made history, but only because they were not very good. And the Troy State Trojans were really, really good.

“We had guys that could run, jump, dunk with the best of ’em,” Terry McCord, a Troy State forward and the only All-American in the team’s history, recalled about the one-of-a-kind game in an interview with the Voice. “You look at games that you know you should win. Like, this should be a walk-over.”

How the ’91-’92 Trojans “walked over” their competition bore little resemblance to how traditional college basketball teams typically do. These Trojans were Division II, but the NCAA had them slated to move up to Division I in 1993. They played run-and-gun, meaning they sprinted up the floor and chucked up the first shot they could. Their coach had no playbook, and their shot clocks didn’t run out. On average, Troy State scored 111.1 points per game.

“We were a fast-paced team,” McCord said. “The track at Troy, we completely wore it out, we practiced sprints so much. Speed and conditioning.”

It worked for them: The Trojans went 27-5 that season, eventually falling in the Division II National Championship.

So when the Trojans went up against the DeVry Hoyas, a conference-less team that played literally anybody who’d play them, Troy State knew they could go for a record. The Trojans had hit an astounding 187 points when they played the Hoyas the year before, and they had only gotten better.

The Trojans had a very clear goal for this game: 200 points. But no team at any level of the sport had ever gotten close to 200, even in the NBA, which has the world’s best players and eight more minutes than college play. Their task was nothing short of Herculean. I don’t know enough Greek mythology to tell you whether that’s apt for a team named the Trojans, but it sounds nice.

They passed their previous record of 187 at the ten-minute mark of the second half. With almost eight whole minutes to go, Mac McCarroll, the play-by-play commentator, made the call and the crowd went wild.

McCord, who assisted the 200th point, raised his arms in exaltation. And the Trojans kept up their pace even after passing 200, ending the game with 258.

The DeVry Hoyas could have easily given up. They could have succumbed to the overwhelming efforts of the Trojans, who played as if they were driven by the god of war. But they didn’t give up. They didn’t even falter.

They didn’t fight for the purpose of winning—DeVry entered the game knowing they weren’t going to win. The Hoyas were already down by double digits before they scored a single point, and they spent a majority of the game with less than half the number of points the Trojans had.

But they did it to have fun, and they did it for Hoya glory. For that, they should be heralded.

Starting in the ’80s, not 10 years before DeVry’s Hoyas would be entered into the record books, this question hit sports sections across the country. One paper remarked: “Patrick Ewing is a Hoya. Michael Jackson is a Hoya… But what is a Hoya? Really.”

As the story goes, Georgetown’s teams were referred to as the Stonewalls, referencing the stone wall lining the front lawn where games were held. All students were required to learn Greek and Latin then, and invented a chant that combined the two, “Hoya” from Ancient Greek and “Saxa” from Latin. The translation: “what rocks.” The chant stuck, then was shortened to name the school newspaper, then was passed on to the athletes. That’s how Georgetown became the Hoyas: a prominent stone wall, mandatory classical language instruction, and a student newspaper.

But DeVry didn’t have any of those things: no stone wall, no Greek classes, no newspaper of any kind that I could find. While we can speculate, it should be noted that there are no complete and surviving answers. Anything that resembled one, should it have ever existed, has been lost to the sands of time.

There’s no connection between Georgetown and DeVry, nor between Georgetown and coach George Trawick, whose idea it was for DeVry to have a basketball team in the first place. In a 1989 Atlanta Constitution article, Trawick is quoted saying, “I went to the folks at DeVry, told them my plans and here I am.” And DeVry clearly left him to run the show with little institutional involvement.

The Hoyas practiced off campus, they washed their own jerseys, and often had to find their own means of transportation to games. The athletic budget in 1990-91 was reported to have been just $1,000.

So if anyone were to give DeVry their name, it’d have been George Trawick. I could not find any contact information for Trawick, but Tim Young, a starter for DeVry that fateful day, said that if  Trawick had a particular reason, he never shared it.

“Maybe it was because he was a Georgetown fan when they created the team. And we needed a mascot,” Young said in an interview with the Voice. “I remember I had shirts, shorts that had the Hoyas on them.”

The Georgetown Hoyas were everywhere in that era, known to some as “Black America’s team,” so it would have been impossible for Trawick to not have known of them. Whatever the case, he went full steam ahead with the name, using blue and gray jerseys and putting a bulldog on the warmup pullovers. They were Hoyas, and there was no mistaking it—rich linguistic history behind the name or not. 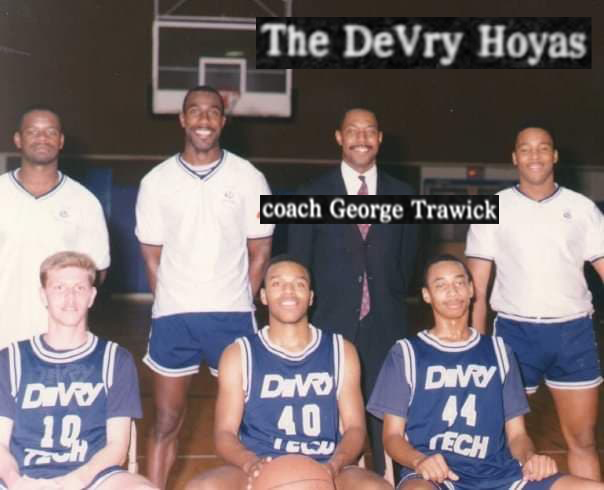 The DeVry Hoyas’ devastating loss brought them more publicity than ever before. Columns appeared in papers across the country noting the shattered records, and DeVry shared the spotlight with Troy State. After all, some columns alleged bitterly, it took some cooperation on the part of DeVry to let this disastrous result happen.

“There were all these reporters trying to talk to us, get us to say it was rigged because we didn’t play defense,” Young recalled. “We didn’t plan it like that, we just knew that they were gonna score a lot, we wanted to score a lot.”

Some papers snidely pointed out the Georgetown connection. “The Hoyas—a nickname borrowed from a team known for defense—lost to Troy State 258-141,” a columnist for the Atlanta Constitution wrote.

In fact, earlier in the season, the Tampa Tribune pointed out the shared name when they came to play their hometown team: “The DeVry Institute Hoyas wear the same style and color uniforms as the more popular Hoya team from Georgetown. But against Florida Southern College Saturday night their performance wasn’t quite up to par with their outfits or nickname.”

Being known for a brutal loss made it easy to contrast DeVry and the Georgetown Hoyas, who at the time were still big-time contenders with players like Alonzo Mourning and Dikembe Mutombo. Dick Vitale, poking fun at John Thompson’s notoriously easy non-conference games, asked if Thompson had “phoned down to DeVry Institute to schedule them next year.”

“Hoyas against Hoyas,” Trawick mused in response, according to the Philadelphia Daily News. “Sure, we’d do it. Why not?”

Tragically, the two groups of Hoyas never did cross paths. At the end of the ’91-’92 season, DeVry announced that they’d be taking a season off due to financial considerations. They would never return from that hiatus.

In their three seasons of basketball, DeVry played 81 games. They won just 15 of them.

And somewhere in those 66 losses lies the 1992 masterpiece that we examine today, the only game the DeVry Hoyas played that we have record of. A 1 hour, 20 minute, 40 second-long, record, uploaded to Youtube in glorious 480p by documentarian “kip SMITHERS.” It’s a treasure trove—but for our purposes, one gem stands out.

Sure, the Trojans broke more than a dozen records. Sure, the Hoyas lost by more points than any team has ever lost by. But they still scored 141 points of their own. And they were led, spiritually and statistically, by one undervalued man—Dartez Daniel, a 6’9” junior from Sandersville, Georgia. Daniel was their best scorer, as well as their best ball handler. (It could not be determined which Hoya was the best defender, as none of them played any defense.)

Daniel had a fantastic game that day. He shot .667 from the field, .500 from three, and notched 11 rebounds. He hit a three at the final buzzer, bringing his total to a whopping 42 points, giving him the title of the highest scorer in the highest-scoring game ever.

42 points in a game is more points than I could find for any other DeVry Hoya. It’s also more points—make sure you’re sitting down for this—than all but three Georgetown Hoyas have ever scored.

For too long we’ve left him out of our history books glamorizing “Hoya history.” But now, after three decades of ignorance, it’s time to wake up. The administration can no longer sit idle and leave the fourth-highest single-game scoring Hoya unrecognized.

kip SMITHERS and I must not be ignored. His recording shows the DeVry Hoyas take the court and get walloped. But walloped or not, they were unmistakably, undeniably Hoyas. And Daniel unmistakably, undeniably scored 42 points. The commentators got it wrong the entire game, probably having missed a layup or two, but I counted out his points. You can too, I guess, if you’re some kind of masochist.

I don’t know what Dartez Daniel is up to now. He won’t respond to my DMs, and I don’t know where he lives, what he does, or if he even remembers that day. All I know is that 30 years ago, somewhere out there in rural Alabama, amidst utter, incomprehensible chaos, a Hoya dropped more points than any Hoya has since the ’60s.

Put him in the record books. 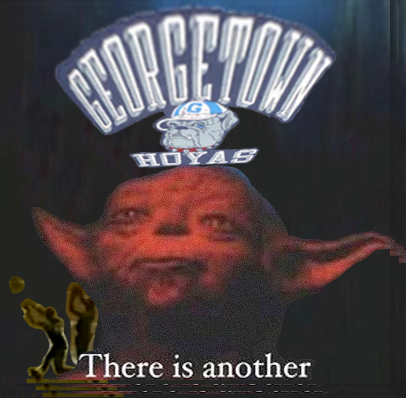 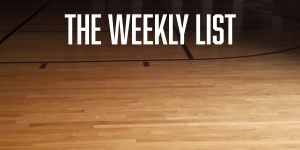