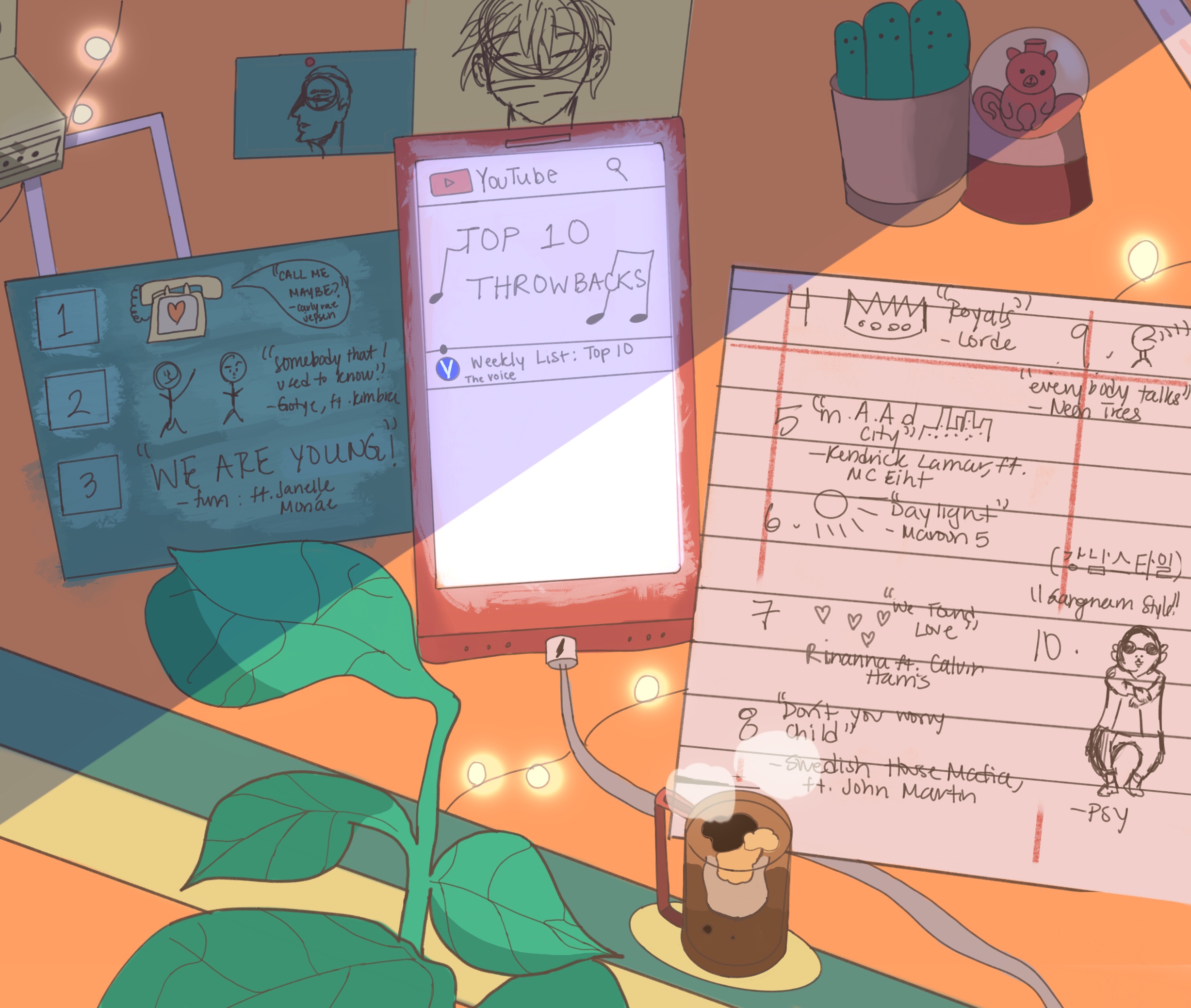 The year is 2022. Us 2000s kids have been in the game for a little while now—and that means we have accrued wisdom. Taste. Cultural acumen and artistic sensibility. Like all generations, we approach a moment of unprecedented clarity in our lives. As the bildungsroman’s final pages turn, we tap the universal lesson, gifted to us by our forefathers:

Music was better in the good old days.

Specifically the good old days when we were impressionable young teens. Before then, music was bad. Since, it’s just not made the same. This is clearly true. No, I won’t be fielding objections at this time. You read the headline. You kept reading. You’re looking for some 2012 bops. Let’s get on with the list.

Listen, there was no other place to begin. Carly Rae Jepsen’s breakout pop hit was inescapable. There were flash mobs, retrospectively tacky parodies, and viral lip-sync videos by everyone from Bieber to Cookie Monster to the U.S. Marine Corps. Internet virality still felt weird (and less manufactured) at the time, so most responded by shrugging their shoulders and jumping in on the trend. And that’s without even mentioning the actual song. Let me tell you, this bubblegum pop goes hard.

When you hear that xylophone tap, you know something special is about to play. Gotye really dropped the number one single on the Billboard Hot 100, earned three Grammys, and followed it up with a “buh-bye.” He didn’t leave music, of course, but he retired the Gotye stage name to pursue other interests—namely, his own record label and band, The Basics. The guy never even enabled ads on his music video. You know, the one with 1.8 billion views. Clearly, he’s the G.O.A.T.(ye).

Before Jack Antonoff was off rocking our worlds co-writing with every pop girl in the book, he was but a third of the indie rock band we all wish we still had. Consider the following: “We Are Young” has one of the catchiest, most beautifully straightforward drumlines in 21st-chttps://www.youtube.com/watch?v=6JR0F6wrvIQentury pop to date. Paired with Nate Ruess and Janelle Monáe’s bright vocals, plus an equally colorful piano, it’s no wonder the group’s breakout single still holds up a decade later. The song is like a lover waiting for you, just across the bar.

Glitz-and-glamor 2000s club music was becoming dated by the 2010s, and the public craved a different kind of buzz. Enter the Kiwi queen: Lorde. (I’m cheating a little because the single didn’t chart until 2013, but really, how could I not?) Its stripped back instrumentation and leisurely pace might have been rare for the charts at the time, but the song’s DNA is all over modern alt-pop. Besides, the track technically featured on her independent debut The Love Club EP (2012), so I’ll claim it for 2012 on a technicality.

Really, the whole of Kendrick Lamar’s major label debut deserves to be here. Good kid, m.A.A.d city (2012) is an intricate narration of Lamar’s youth in Compton, but the record’s title track takes that concept and layers it atop an absolutely unforgettable two-part instrumental by Sounwave and Terrace Martin. The solo after Lamar’s final verse is one of the year’s best musical moments, and in a year as packed as 2012, that’s saying something.

Yes, Maroon 5. Perhaps the furthest possible point from the previous entry. I know, Adam Levine is kind of a walking bread loaf. But hear me out. Back when my folks actually purchased music for 99 cents on the iTunes store, when I had no personal preferences and just latched onto whatever our shared iPod library offered, this was right near the top of the library. Is it the best song? No. Was “Payphone” or “One More Night” better? Arguably. My point is, though, that sometimes it’s the mediocre stuff—the songs you forgot you knew—that really bring you back.

I know I said Lorde brought 2010s pop into its moodier phase, but the industry wasn’t quite there yet. My evidence: this absolute banger. It was one of the year’s many Calvin Harris chart climbers (see “Feel So Close,” “Sweet Nothing,” and “I Need Your Love” for nostalgia blasts), but Rihanna’s vocal performance lifts this track above the rest featured on Harris’ album 18 Months (2012). She cuts through sirens and synth beats with ease. The track is cacophonic, but in the best way possible. And yes, it was technically late 2011; I am playing fast and loose with the rules. Time didn’t exist when we were kids, so let me have my fun.

Don’t you worry—Calvin Harris isn’t the only house music on this list. This Swedish supergroup’s amped-yet-constrained style plays well with John Martin’s wistful delivery. The whole song is like a fading memory, if that memory were backdropped by a relentlessly overdriven synth beat. If you’re feeling extra, try taking on the almost seven-minute pre-radio edit; or, better yet, listen to their new 2022 album Paradise Lost, since the group apparently reunited just in time for the single’s 10th anniversary. Just goes to show, even these stars are trying to relive the 2012 glory days.

IT STARTED WITH A WHISPER! AND THAT WAS WHEN I KISSED HER! AND THEN SHE MADE MY LIPS HURT! I COULD HEAR THE CHIT CHAT! TAKE ME TO YOUR LOVE SHACK! MAMA’S ALWAYS GOTTA BACK TRACK! WHEN EVERYBODY TALKS BAAAACK!

We opened with a viral sensation, and we’ll end with one too. PSY wasn’t the first K-pop crossover in America by any means, but it was certainly the biggest for its time. It was so big, in fact, that it forced Billboard to catch up and begin incorporating YouTube metrics into their rankings: “Gangnam Style” was the first video on the site to accumulate 1 billion views. It’s goofy, undeniably catchy, and perfect for parody.

And yes, I know you tried the dance. I did it too. We all did.