Imagine, for a second, that you’re me. Now in all honesty, you’re not, and you can never hope to be. Because, as Talib Kweli will have you know, while most... Read more

Let us be the latest voice to bemoan the loss of Joey Ramone, who died of cancer on Sunday at age 49. Ramone will be forever remembered as the lead singer of seminal New York City punk band, The Ramones, who could fairly be credited with introducing the sound of punk rock to the world and thereby changing the course of popular music history forever. It wasn’t that the members of The Ramones were particularly talented, but they were the catalysts that launched punk rock into the mainstream.

Late last month, the Environmental Protection Agency decided to reverse a drinking-water regulation imposed in the last days of the Clinton administration that would have reduced by 80 percent the permissible levels of arsenic, a known carcinogen, in drinking water supplies. The Bush administration rejected the new standards in favor of retaining archaic arsenic regulations that were established in 1942. President George Bush’s rejection of the new drinking water standards is only the latest development in the Bush administration’s assault on the environment.

In the wake of the recent “incident” in the South China Sea, we are afforded the opportunity to look back upon what happened, what could have been done differently and what lessons we should take away from this regarding an overarching philosophy of foreign policy in the new Bush administration. To date, the policy of the Bush White House has been largely reactive.

The ivy at Wrigley Field is still brown, and until the clorophyl kicks in, don’t take baseball too seriously. Take the Twins. There’s no one on this team named Puckett,... Read more

As Pedro Swann stood on deck last Saturday night, a fan voiced his support to the stocky outfielder. Down 1-0 with one out and a man on second, the Richmond... Read more

In a speech last Tuesday in the ICC auditorium, University President Leo O’Donovan, S.J. said Georgetown is in the process of reviewing the curriculum to ensure the current structure allows... Read more

In a speech last Friday, the co-founder of Ben and Jerry’s Ice Cream, Ben Cohen, spoke on the importance of operating morally responsible businesses. Cohen said he realized he wanted... Read more

I’m still trying to figure out how the District of Columbia Board of Zoning Adjustments writes their reports. After reading the latest report from the BZA concerning Georgetown’s ten-year plan,... Read more

Winona LaDuke, former Green Party Vice Presidential candidate, spoke to a 75-person crowd in ICC Auditorium on April 9 and aired her views on a wide range of issues from... Read more

Early April is the best time of year. Baseball season starts. On fields of dreams across the country, the boys of summer make an early appearance, and so begins America’s... Read more

Catholics for Free Choice activist David Nolan spoke to students Tuesday on the issues of the Catholic church’s stance on abortion and the Vatican’s privileged status at the United Nations.... Read more

The Georgetown University Student Association demonstrated support for an African American Studies Program in the Georgetown College by passing a resolution this Tuesday. Citing the importance of scholarship on African... Read more

An opponent of the tobacco industry, Jeffrey Wigand, spoke Monday in Gaston Hall on his dismissal from a large tobacco company and why he revealed confidential information exposing secrets of... Read more

A coalition of 17 student groups held a protest rally in Red Square Wednesday remembering Martin Luther King Jr.’s assassination and calling for an end to injustice everywhere. “We are... Read more 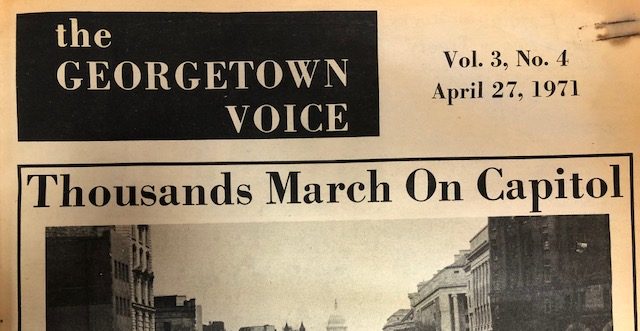 Inside Campus Journalism at Georgetown

What is Campus Journalism? Campus police officers have been forced to protect student newspapers at Brown University after 4,000 copies of the campus paper was stolen due to a controversial... Read more

The Board of Zoning Adjustment has placed a list of conditions on the University’s 10 Year Plan, including the rejection of the University’s request for an increase in undergraduate enrollment.... Read more

Members of United Students Against Sweatshops returned from Mexico March 27 after visiting with workers trying to form a union in a factory producing Nike and Reebok apparel. The Kukdong... Read more

An assistant with the Volunteer and Public Service Center was dismissed after a University investigation turned up evidence she may have embezzled up to $5,000, a VPS employee said. The... Read more

Tastings are nice. You get a little sampling of a lot of different foods. You can try things you’ve never tried before and revisit dishes that you’ve always loved. This... Read more